I adore William Steig's vocabulary. What a find!

In the midst of packing to move, with all the drama and unsettling that provides, we are deep into mythology right now. I've written before about my childhood obsession with D'Aulaires' Book of Greek Myths. I broke it out for the first time close to four years ago with Eleanor, when she was too young for many of the stories but enjoyed the pictures. Two years later, I read a number of the myths with her -- the ones at the beginning, focused on the twelve Olympians, we read multiple times. Several weeks ago, we took the book out again, and Isabel was hooked. The D'Aulaires include illustrations on every page to satisfy my visual daughter.

Happily, it was a read-aloud to satisfy both Eleanor and Isabel at the same time. Most mornings and nights, we'd read together; sometimes Eleanor would read her own book, and I'd re-read Isabel one or two of the myths she requested. (And where was Will? Sometimes with Jeff; often playing on the floor or sitting on my lap and putting things down my shirt while I held the book open behind him; sometimes shutting the book and shoving his board books at me. Three is more complicated than two.)

After we'd finished the Greeks, cover to cover, we started in on D'Aulaires' Book of Norse Myths, which your girls loved so much. Again, total buy-in from both girls (though Isabel asked, quite early in the book, "Where are all the goddesses?" Say what you will about the Greeks and their gender issues; they did a great job with equal representation.)

And then I remembered to look in my closet.

Two years ago, when Eleanor decided to dress up as Athena for Halloween, you gave us George O'Connor's graphic novel Athena: Grey-Eyed Goddess, with the warning that we should preview it to make sure it wasn't too violent for Eleanor. I flipped through it, saw a couple of images that made me think it might not be the right time, and put it on a shelf in my closet, meaning to read it through when I had the chance. Like I said, that was two years ago.

I was a fool to let it sit so long. George O'Connor's Olympians series is absolute genius. There are six so far: Zeus: King of the Gods, Athena: Grey-Eyed Goddess, Hera: The Goddess and Her Glory, Hades: Lord of the Dead, Poseidon: Earth Shaker, and Aphrodite: Goddess of Love. They're coming out as a boxed set this October. We currently have them all out from the library, but we're going to need to buy them.

What makes these books so, so good? O'Connor is a Greek myth nerd from way back, and in writing and illustrating his graphic novels, he draws on lots of original sources. Reading his author's notes at the end of each book, it's clear that O'Connor has thought deeply about how to present each of the gods, choosing which aspects of their stories to include to shape a fully-rounded and complex picture of each of them. There is rich characterization here.

This is true particularly of the goddesses. O'Connor provides about as feminist a reading of Greek mythology as I think you can make, given the material. In Hades: Lord of the Dead, Persephone speaks up against being treated like a pawn by her kidnapper Hades and her mother Demeter. Ultimately, she enjoys the prospect of being Queen of the Underworld, and (in one of what I think are very few moments where O'Connor actually changes the source material) she chooses to return to Hades, rather than being forced to because she absentmindedly ate a few pomegranate seeds.

In O'Connor's telling, Hera is much more than just a jealous spouse, making life difficult for Zeus and his illegitimate children. She has a keen sense of humor, and seems very much in control of herself. Hera's tormenting of Heracles is depicted as a way to help him become the greatest hero on earth, and made more complex by the inclusion of an episode where she nurses him as an infant in order to save his life: You may notice here that Heracles is dark-skinned. So is Aphrodite, and so are a host of other more minor characters -- there's some diversity going on, which is also nice.

O'Connor's illustrations are both thoughtful and gripping. The gods appear as Marvel-comics versions of themselves -- lots of rippling muscles and glaring faces, lots of action sequences when recounting the Olympians' many battles. But there are so many subtle touches. The Titans are dark and shadowy, their heads touching the sky, reddish clouds floating about their heads like hair: Poseidon's son, the Cyclops Polyphemos, has a head modeled on the skull of an elephant, because O'Connor is drawing on the theory that the ancient Greeks discovered mastodon skulls and mistook the trunk hole for a single eye socket, giving rise to the legend of the Cyclopes: 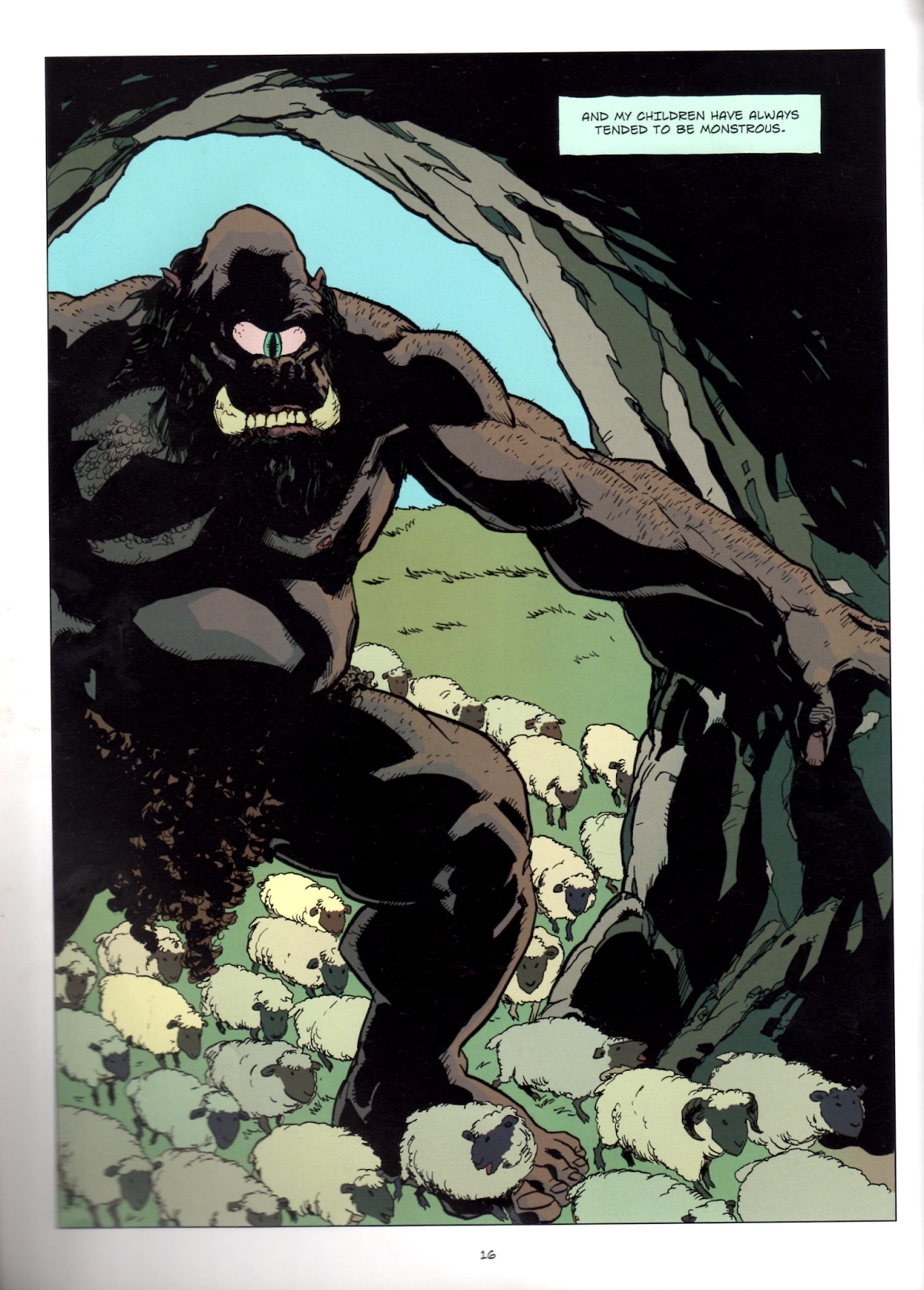 I should note here that this episode in Poseidon:Earth Shaker is fairly graphic. I'm far less concerned about exposing my kids to violence in graphic novels after reading all of the Bone series with Eleanor and Isabel -- the last book, in particular, is quite bloody. Still, even Isabel paused over Polyphemos eating Odysseus's men two at a time, and Odysseus driving a sharpened stake into his eye. ("I don't like that part," she said, looking at it again.)

In some ways, I'm glad we're discovering the series now rather than two years ago. Eleanor is reading them on her own, and returning on her own to the excellent material included at the end of each book: O'Connor's footnotes, which he calls "G[r]eek Notes"; author's notes; character profile pages; questions for discussion. She came out of her room tonight after Isabel and Will were asleep and wanted to discuss Question 7 at the end of Aphrodite: Goddess of Love: "Very few people believe in the Greek gods today. Why do you think it is important that we still learn about them?" Eleanor's answer: because it's the way to pass the stories on to future generations, and then if people want to believe in them again, they can. Then she combed through the end pages and wrote a list of one of the sacred plants of each god before finally going to bed.