Springtime: reveling in the wacky

Earlier this week, I had a lovely conversation with a mother who told me how much her three year old loves Maya Makes a Mess, a book that was a big hit in your household a few years ago.  It has a wonderful deadpan wacky sense of humor (food tastes better when eaten with hands? then we must do it!) which has popped up again in two new releases. 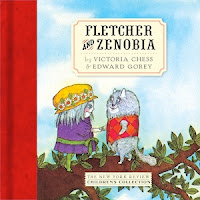 Back in 1967 Edward Gorey and Victoria Chess wrote Fletcher and Zenobia about a friendship between a cat who is stuck in a tree: 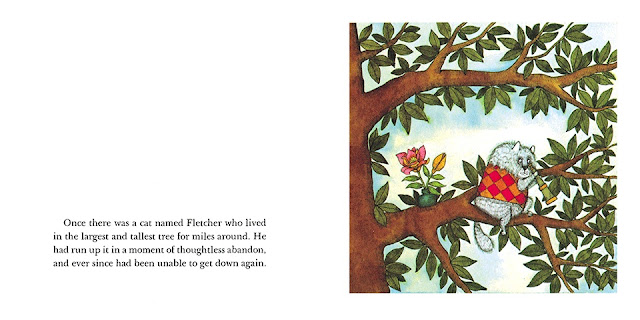 and a doll who emerges from a papier mache egg inside a steamer trunk he finds in the tree:

Neither can figure out how to get down from the tree, so they have a party, complete with many hats which were in the steamer trunk, punch, four quarts of peach ice cream (there's a freezer), and a Zenobia-baked "lemon cake with five layers, which she covered with raspberry icing and walnuts and decorated with green and blue candles ('Perhaps it is one of our birthdays,' she said)."

While Zenobia is teaching Fletcher how to waltz (there's music on the gramophone), a friendly moth joins the party, eats most of the refreshments, and wakes up the next morning big enough to carry them out of the tree and on to new adventures.   The matter-of-fact-ness of all the absurdity is so delightful.  The New York Review of Books has resurrected this little gem from out-of-print land, bless them: it went on sale last month.

Fletcher and Zenobia somehow strikes me as not from this continent: the freshness of the absurdity, the high-end vocabulary (withal, gramophone, mauve, gondola, maharajah).  Goes to show what I know.  Both authors were born in Chicago; wiki tells me that Gorey only left the U.S. once in his life.

But
Daisy Darling, Let's Go to the Beach! by Markus Majaluoma is definitely from elsewhere: Finland.

Daddy takes a look out of the window.
"Daisy darling, let's have a jolly day on the beach!
Do you remember where you put the spades and other beach things?"
Yes, Daisy does remember.

Daisy is a curly-haired toddler whose pacifier never leaves her mouth.    She gathers her buckets, swimfins, snorkeling gear and large inflatable alligator and they set off on Daddy's bicycle.   When they get there, Daisy applies suntan lotion to her father's back with a spade.  A cast of minor characters appears in marginalia and the end papers: each plays a role in one or two pages.  There's the fisherman who gives Daisy a fish, the crossword puzzling woman whose hat Daisy adorns with the fish ("What has four letters and lives in the sea?" the lady asks.  "Fish," Daisy whispers in the lady's ear.), an ice cream man and more.  It's a book about some of the things a child is likely to encounter in a day at the beach, but all slightly off in its own nutty way. 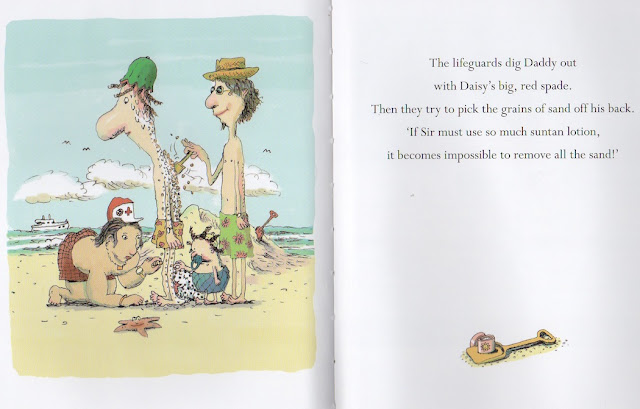 On the way home, Daddy pedals fast.
"Didn't we have a jolly day at the seaside?" he puffs.
Daisy, too, is happy because Daddy's back is covered with many exciting sea creatures.


A very satisfying day at the beach.

Here's to the anticipation of summer.

Posted by Deborah at 9:24 PM No comments: