Here in New York, we are happily wallowing in our post-Christmas reading glut -- the books you sent, coupled with a number of others from relatives and a select few that Jeff and I bought for the girls, are keeping us very happy.  Thank you!

Scrolling through headlines in the New York Times today, I was caught by a feature called "What's 'Just Right' for the Young Reader?" It poses the question, "How do you know the age at which to introduce children to certain books that might have 'big kid' themes?" and then asks eight people with expertise in children's literature -- authors, librarians, a middle-school teacher, academics -- to answer it briefly.  The short response essays are interesting and varied in content.  They touch on some themes we've written about here: what's "too scary" for your younger child? Your chapter-book reading age child? Most of the focus in these mini-essays is on books for kids who are reading on their own, and several mention the Harry Potter problem: the series which begins as appropriate for one age, but by book four becomes weighted with far more adult themes.

The consensus seems to be what we've come to many times over: it's good to be up to date on what your kids are reading, and to be able to have conversations with them about difficult material (see here and here).

This train of thought started me thinking again about what it means for a book to be "just right" for a kid.  There's "just right" content, which is largely what the NYT essays talk about.  There's "just right" reading level, as we're beginning to experience regularly with Eleanor.  Now that she's in kindergarten, she brings home a new set of five books every week, chosen from the bins that have been deemed right for her reading level.  These are tiny paperback books, most of them not terribly interesting in content, which help her practice what she can read on her own and push her to challenge herself a little bit.

There's "just right" in terms of what kids want to have read to them before they can read to themselves: for whatever reason, Isabel recently became enamored with a picture-book version of Dumbo, and we had to read it several times a day so that she could keep engaging with the story.  (Her latest obsession, thank goodness, are the two Alfie treasuries you sent for Christmas.  Much more fun to reread!)

One of the essayists, Deborah Pope, writes about the importance of older kids, even kids who are able to read chapter books alone, returning regularly to picture books.  Happily, I am so often reading the same books to both girls at the same time -- and of course, the arrival of baby #3 will continue the trend -- that Eleanor will be interacting with picture books for years to come.  For Christmas, Eleanor drew a pop-up book for her grandparents, containing a story told entirely through pictures: "Like Flotsam," she told me, when I asked if she wanted to include some words.

Finally, there's "just right" in terms of what a kid gets out of the same book, years or even just months after reading it for the first time.  This week, my in-laws have been staying with us, and Eleanor's Lala read her the third Nancy Drew book.  It was fascinating to see how Eleanor responded differently to Book #3 than to Book #1.  The excitement over possible danger was still there, in spades -- this girl cannot sit still when there's any kind of suspenseful moment -- but added to that was a whole layer of far more active participation.  She kept asking Lala to pause, and then would engage her in conversation about what might happen next, looking ahead and using the pictures and captions to make inferences and predictions.  Her ideas were pretty good, too.  Essentially the same book, but the kid, six months older, engaged with it in a totally different way.

As always, I am left feeling grateful, and feeling like I have a tremendous amount to look forward to in the years ahead. 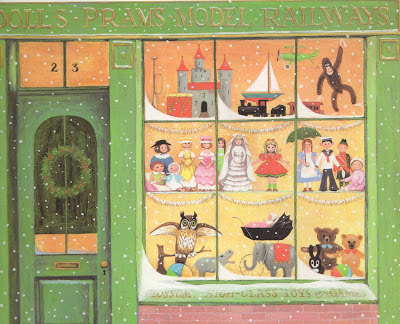 What an excellent post from Bob!  I've never read any Rosemary Sutcliff, but it's clear that I should.  She'll go on my maternity leave reading list, for sure.

This weekend has offered the first breather for me in quite a while, after a punishing week of teaching and grading and kids' school holiday parties.  Thanks to my most excellent in-laws, yesterday I had a chance to finish my Christmas shopping, including a visit to Book Court, our favorite local independent, to pick up a few last books I'd ordered.  Seeing the crowded, cheerful store, I thought happily of the business you've been doing.

In the children's section, there were several Christmas-themed picture books facing out, including one I've been wanting to write about for a few weeks: The Nutcracker, by Susan Jeffers.  We discovered this book a couple of years ago, completely unconnected to the Christmas season: Eleanor picked it up at the library, and then wanted to read it every night for three weeks.  My general rule on library books is that if they occasion two or three requests to renew them or take them out again, we'll go ahead and buy them, so about a year ago I bought Eleanor this copy.

It's a clearly-told, sumptuously illustrated version of the story which hews closely to the plot of the ballet, and contains lots of good dancing pictures.  One of the charming and odd things about it is the number of pages where, if you look closely, no one's feet are touching the ground: everybody seems to be floating.

(Apologies for the slightly cut-off text -- the pages are oversized, and my scanner is not.)

The Mouse King is a little creepy, but not too terribly frightening, and there are pages of dancers in various costumes, allowing both Eleanor and Isabel to announce on reaching each page which of the dancers they'd like to be.  (Eleanor is partial to the Sugar Plum Fairy, natch.)  We went to see a version of the Nutcracker ballet this year, and Eleanor was slightly confused that the name of the heroine was Clara -- in Jeffers's book,  as apparently in Alexandre Dumas's retelling of the original and creepier E.T.A. Hoffman story, the girl is called Marie.  Marie or Clara, she points her toes and flies through the air here in a totally winning, slightly cheesy manner which both of my girls adore.

It's a good book for Christmas, or for ballet-loving kids, or for anyone in the mood for a slightly loopy fairy-tale story that ends well.

I can never quite remember from year to year the rhythms of the holiday season in the toy and book store, but it sure has been intense this year.  So my spouse is stepping in, delivering an entry I've been hoping he'd write for quite a while.  Without further ado, here's Bob Thompson, guest blogger: