It's so cheering that there are lots of books out there that we have yet to introduce to each other.  I'm so glad Moomintrolls are new to you.  You guys are in for a treat.  I'm curious what part of the Moomintroll oeuvre your friend Mark is particularly fond of.  I only recently learned about the comic books; in our household the chapter books were everything.

And I want to hear the family verdict on Wind on the Moon after you finish it.  It will continue to veer into new plot elements.

Lately I've been reading lots of books which are due out mostly between February and May of next year.  They include a first novel by the wonderful Shirley Hughes (creator of Alfie and Dogger and many more), a riveting account of a plot to steal Lincoln's body in the 1870s, and wonderful parallel-worlds story.  I plan to write about all of them as we approach their publication dates.  But your headline about not judging books etc made me want to vent a bit about one particular cover.

A Corner of White by Australian author Jaclyn Moriarty comes to the U.S. in April under the auspices of Arthur A. Levine, the editor who obtained rights to both The Golden Compass and Harry Potter.  He knows how to spot a good book.  This one has little whispers of The Golden Compass: it entails communication between two parallel worlds; the characters in our world live in Cambridge, England.  The worlds once had easy access to each other, but the medieval plagues led the Kingdom of Cello to sever the connection.  We focus on three teenagers (two girls and a boy) in Cambridge who are are studying, among others, Isaac Newton and Lord Byron.  Newton's theories of light become important to Elliot Baranski, the teenager who is the center of the story in Cello: colors occasionally form themselves into storms that can alter moods and sometimes injure and kill.  Elliot's father has disappeared from his village -- maybe voluntarily, maybe carried off by a Purple.  In Cambridge, Madeline, whom Elliot refers to as the-girl-in-the-World, has run away from her father.  Madeline and Elliot discover a crack between their two worlds: it's just big enough to wedge a piece of paper into it, and they start a correspondence.  Madeline thinks Elliot is a guy who's inventing a magical world, not someone who's in one.

There are plots and sub-plots.  Friendships evolve, kids deal a lot with loss and the uncontrollable aspects of their lives.  It's intelligent fantasy -- and by no stretch of the imagination would I put it in the chick lit category.  I would like to think that Arthur A. Levine was out sick the day they designed the cover of the American edition: 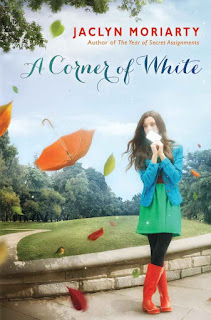 How am I going to be able to sell this to a 12 year-old boy who's looking for a good fantasy book?  A few guys might go for it, but the vast majority will glance at the cover and go on to the next offering.  This screams chick-lit: dreamy-eyed girl, flowing hair, breezy day.  I carried this galley with me to Maine and back again before I picked it up to read -- there's nothing in this cover that hints at the originality of the content.

Tonight, while trolling for a good quality image of this cover, I discovered what the book looks like in Australia, where it came out last month: 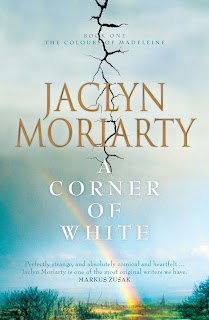 Hmm.  Can't say this makes my heart beat faster, even though it's more literally true to the story: lots of discussion of the light spectrum and rainbows.  And the crack between worlds is right there.  Will this encourage a 12- (or 16-) year-old to pick it up?

We'll have to see what they do with the paperback cover...

Deborah
Posted by Deborah at 11:54 PM