It's funny that you brought up Curious George this week.  The day before your post about him, my friend and colleague Mark was talking at lunch about reading so many Curious George books to his twin boys, so often, that he and his wife have started trading ideas for an adult spin-off about what the Man in the Yellow Hat does every time he goes off and leaves George alone.  One concept: the Man in the Yellow Hat is secretly trying to abandon George in every story, but in various ways keeps getting pulled back to him.  These are the thoughts going through the brain of the parent forced to read the same not-so-great books ad nauseum....

We're starting to think about gift-giving at our house too, though the regular drumbeat of kids' birthday parties always has us looking for the best books to give kids around Eleanor and Isabel's ages.  This morning we went to Isabel's friend Sydney's party (she's the one whose mom gave Isabel the gorgeous Bird, Butterfly, Eel).  When asked what we should get for Sydney, our newly-princess-loving Isabel didn't hesitate: "She'd like Snow White."

Charles Santore (he of the brilliantly illustrated Wizard of Oz, still one of my favorite go-to gifts) has illustrated Snow White with a similar lushness.  His paintings are gorgeous, and the book includes a few spectacular two-page spreads, including one of Snow White running through the forest filled with wild animals on her way to the dwarfs' house: 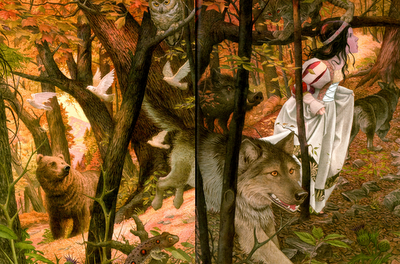 Santore's dwarfs are individualized, but not buffoons -- they look like real people, small middle-aged men: 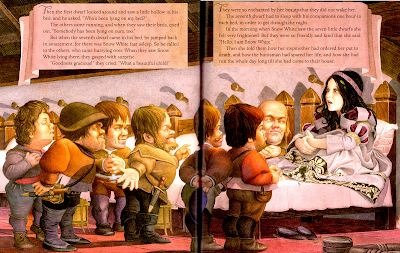 You may notice that Santore, hewing close to the original text, depicts Snow White as a young girl: she's seven years old when she becomes more beautiful than her stepmother, and has her death sentence proclaimed.  She's a kid here, rather than Trina Schart Hyman's young teenager, and her youth makes some of her decisions a little more understandable, though still not exactly smart.  In this version, the evil queen disguises herself as a peddler woman not once, but three times, leading to Snow White's death and resurrection from lace-up dress and poisoned comb before we get to that deadly apple.  You think she'd learn.

The picture on the cover is one of the last ones in the book.  To move away from the creepy idea of Snow White as a child bride, Santore has her age in the illustrations as she sleeps; when she wakes up again, she looks to be in her early 20s, and a wedding makes sense.  Reader alert: Santore's faithfulness to the original Brothers Grimm includes the fate of the wicked queen, who is forced to put on a pair of magic slippers at Snow White's wedding to the prince:

The minute they were on her feet, the slippers forced her to dance and dance, faster and faster, until she dropped down dead.  There was great rejoicing in the hall, and Snow White and the prince lived in the palace and reigned happily over the land for many, many years.

Um, yay?  Eleanor and Isabel both really like this bit -- such a vivid, strange way to kill your enemy -- but it would be easy for parents of more squeamish children to leave a sentence or two out.  The final picture shows only the shoes.