We have another cousin!  Ava was born on 12/12/12 (what a great date to carry through life).  Her parents had the first amazing wedding of the 2010 Summer of Amazing Cousin Weddings.  Ava is Eleanor and Isabel's third cousin -- and she'll soon get a third third cousin from your family.  Welcome, Ava!

Life stays busy in the toy and book store.  I feel like I'm constantly racing to replace sold-out books.  Since my last post, the dam has broken on the Calvin and Hobbes complete set, we keep selling the Lord of the Rings boxed set, and now the box that won't sell is the first 28 volumes of Magic Tree House at $140 -- not my favorite series, as you know.  It's fun to wonder what won't be there anymore after my day off on Saturday. 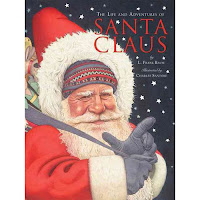 The Charles Santore-illustrated Wizard of Oz is doing quite well, as always.  This year I've brought in more of his Snow White because I was thinking good thoughts about it after your post.  We're carrying  a Santore-illustrated Night Before Christmas (in large and small editions).  And Santore has another L. Frank Baum story: a retold version of  The Life and Adventures of Santa Claus.

It's an odd story -- one could argue that all of Baum's are.  And although you know how much I love Santore's Wizard of Oz illustrations,  these veer toward the more cloying end of the artistic spectrum.  I've scanned two for your perusal.

The story starts in the Forest of Burzee, where immortal magical beings live -- fairies, nymphs, etc.   Somehow a foundling comes into their midst, and a bored and disgruntled wood-nymph named Necile decides to raise him, despite local rules against the presence of humans -- "I need a task, and this baby is helpless."   An exception is made for this kid, whom she names Claus.  Everyone in fairyland thinks he's sweet.
He's a cute little kid and a hunky late teenager, taken from his mom by Ak, the Master Woodsman of the world, to get an education in the world of humans.  Claus discovers there are a lot of children who are human like he is, and there's a fair amount of poverty.  He decides to live in the world and work to make children happy.  Various magical creatures are sent to look after him, and Claus starts whittling toys for children.

His walking expeditions to deliver toys to the locals grow into a nighttime trip to a new town with two Burzee deer and a sleigh:


Right away he saw a problem.  Because it was nighttime, all the townspeople had gone to bed.  "The doors are locked," he said.  "I can't get in, so I can't give the children their toys!"
Glossie [one of the deer], however, had a suggestion.  "Why don't you climb down the chimney?"  And with one leap, the deer had pulled the sleigh to the roof.

He keeps Glossie and partner Flossie out too late, so the royalty of the magical kingdom decide to limit his travel with their deer to one night a year -- Christmas Eve.  Claus gets eight additional reindeer for the evening: "Racer and Pacer, Reckless and Speckless, Fearless and Peerless, and Ready and Steady."  In the following years, Claus delivers toys, starts the tradition of gifts in stockings hung by the chimney (more efficient than delivering to bedrooms!), and invents the Christmas tree by delivering one to a family in a teepee on the plains.  One wonders if Baum's original prose would include a little more sense of the ridiculous in all these feats.

Ultimately, Claus gets old and white-haired.  The immortals come to visit, giving him their Cloak of Immortality, which keeps Claus alive and energetic enough to keep manufacturing toys and jumping down chimneys.

I, for one, am glad Claus is still making those leaps.  Here's hoping he'll bring new baby Ava some wonderful books in just 12 days.

Deborah
Posted by Deborah at 11:28 PM