Where babies come from: The Book(s)

I've been reading sex books for the under-six crowd all day.  I've narrowed it down to four candidates.

These books tend to be almost all about having babies, rather than other motivations for having sex. Some of them spend a lot of time on both perceived and real differences between boys and girls (there's some knocking down of pink/blue stereotypes).  Some of them have diagrams with cross-sections of penises and uteri.  All of them talk about pregnancy (no, the stomach and the uterus are not the same place); many of them go into fetal development.  Most of them are packing lots of information into from 30 to 58 pages.  Sometimes they're surrounding the relevant information with lots of less-so info -- e.g. a two-page spread in It's Not the Stork with a naked girl on one side and a boy on the other, seen from the back.  About 20 different body parts are labeled (hair, wrist, arm, waist, knee, thumb etc) -- and they're all the same!  But turn them around (another two-page illustration), you can label all those parts again (adding belly buttons and nipples), but look -- here's a vulva, there's penis and scrotum.

The big difference is in the how-it-happens part.  Two basic explanations:

A) Two people really love each other.  They decide to have a baby. Sperm and egg get together.  A baby grows inside the mom.  We have two candidates in this category

The one on the left was written by Joanna Cole, of Magic School Bus fame, back before she developed a sense of humor.  Most of the illustrations are photographic, including a lot of in utero photos.  Both How You Were Born and Amazing You! (by Gail Saltz) have good two-page notes to parents with lots of common sense advice.  They both label themselves as being for children ages 3 and up.  Here's the Joanna Cole explanation of conception: 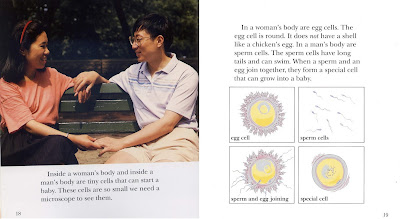 The next page moves on to more about cell division.

Amazing You, whose subtitle is Getting Smart About Your Private Parts, emphasizes one's own relationship to one's body, in terms of knowing about it, being proud of it, and enjoying it discreetly.  ("It's perfectly natural to be curious about your private parts and to want to touch them.   But this is something you should do only in a private place, like your room.")  Amazing's note to parents has this advice about preschoolers and pregnancy:  "Most are not ready to hear about intercourse and do not need to know about it yet.  What they want to know is where in your body the baby grows and how it comes out."

For those who feel their children may want to know more, we have: 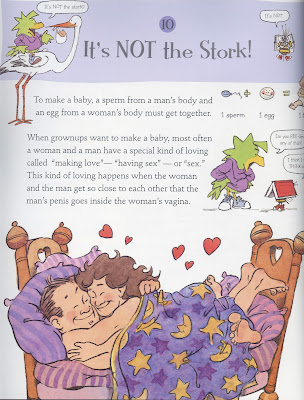 B)  Penis and vagina get together, sperm transfers, baby grows.

Page to right is from It's NOT the Stork! by Robie Harris.  It's the youngest in a trilogy of what are now the staple fare of sex ed books.  It considers itself appropriate for ages four and up.  This is the 58-page one, and it's crammed with information.   Basic physiology, sexual development, conception, fetal growth, birth, different kinds of families, good touching/bad touching, and on and on.  The note to parents says your child may not want all the information in it at once, which makes sense.  Although I find it hard to imagine a voracious reader like Eleanor being willing to read anything just a few pages at a time.

The other book in this category is What's the Big Secret? Talking About Sex with Girls and Boys by Laurie Krasny Brown and her spouse Marc Brown, author of many Arthur and D.W. books.  I will admit that I approached this one a bit warily, because although they've done some other pretty good advice books (Dinosaurs Die, for example, and Dinosaurs Divorce), I really can't stand the Arthur books.  What's the Big Secret has lots of the same information as the others, a little less overwhelming than Stork, some kid-appropriate humor.  The stated message of the book is that there's nothing to be uncomfortable with here and conversation and openness is the way to go.  But every now and then there's a pretty clear message that we're uncomfortable talking about this, up to the last page, where a boy tells his father he wants to ask a question about sex and dad says, "Okay, fire away.  I'll try to answer it."  But the thought blurb above his head is saying, "Relax, take a deep breath...."  And this isn't the note to parents part: this is what you're reading to your kid.

When people come to the store looking for books about sex for their kids, I always encourage taking the time to read a fair amount before they buy.  As with anything else you teach your child, your (the parent's) feelings are going to convey strongly.  So you need something you're comfortable with.  I don't remember our using any books in the early discussions of sex with our kids.  I do remember we used the "when two people love each other they sometimes decide to have a child" line, which ultimately led to my taking my cue from Irving Berlin for the next step in the education.

There we were, driving around town as usual listening to musicals on the tape player.  The girls were maybe 5 and 6.   Ethel Merman was belting out "Doin' What Comes Naturally," from Annie Get Your Gun.  She was even singing the last verse, which I discovered today from googling has been expunged from many versions of the song:

Sister Rose went right by them.  But Carrie -- wait a minute.  This information we'd given our children about mom and dad loving each other so much and wanting children together:  how does this translate over to a mother who doesn't want to marry?  How did she make the babies?  Even though they knew plenty of kids in non-traditional households, somehow it was Ethel Merman who made them ask the question.  So I told them, driving past the Potomac on a lovely evening after gymnastics class.  As with all of parenthood, sometimes you're just winging it.

Happy Birthday in advance, by the way.  Your mother, who arrives here tomorrow,  and I will celebrate it on Saturday by marching together for sanity.