The images of storms you posted as Hurricane Sandy was battering us all were quite evocative.  The New York experience has been so awful.  I'm glad you came through unscathed, although disrupted.

As promised, I've been digging for books about biracial adoptions, and about adopting kids older than babies.  I haven't found a lot, but here are some offerings.

Starting with the ever-chipper Todd Parr:

We Belong Together: A Book About Adoption and Families. It opens:


We belong together because ...
you needed a home
and I had one to share.
Now we are a family. 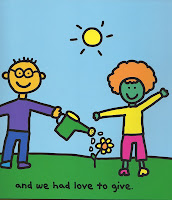 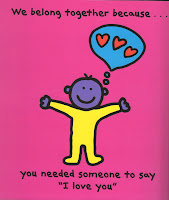 The illustrations for that page appear to be a single-mom family living with grandma and grandpa.  Parr offers a wide variety of kinds of families -- single parents, gay parents, straight parents, and even a two-page spread about dog adoption ("We all needed someone to play catch with"). *  His people come in a wide variety of skin colors, most of them not found in nature (see illustrations to right and left).

A cheerful, loving not very explanatory introduction to adoption for little ones.

Then there's Beginnings: How Families Come to Be by Virginia Kroll (out of print: link is Alibris).  It starts with dark-haired probably Hispanic parents telling their genetic-offspring son about his birth.  Each chapter is the story of a different child, told as a child-parent conversation.  There's a Korean adoption, an uncle adopting his nephew after his single-mom sister dies, two private adoptions (single white mom adopting white kid, black couple adopting black baby).  Then there's Nicole, a maybe-Hispanic girl in a wheelchair -- five or six years old -- being adopted by a mostly-blond white family:


"You had three sons.  Now me."
"I kept thinking how beautifully black braids went with blond buzz cuts as I looked at all my children.  Pretty soon your brown eyes hooked into your brothers' blue, and you all began bickering over whose ice cream cone was biggest and whose singing voice was best, as brothers and sisters do."

Nina BonitaKane-Miller, part of the Usborne publishing house, has a Brazilian book, by Ana Maria Machado which is a fable-ish storybook about race and mixed families.  A white rabbit meets a black girl at the beach (feels so Brazilian already!) and asks how he can have fur as beautifully dark as her skin.  She spins yarns at him -- painted herself with ink, drank too much coffee, etc. -- which he methodically tries, to no avail.  Then he gets the concept of born-that-way, finds himself a dark spouse, and has children of many hues.  It's a while since I've read this one, but it does have a whimsically celebratory feel to it.

And finally, for your friends who are adopting a 1 1/2 year-old Ethiopian girl: I can find no African adoption books. Just Add One Chinese Sisterby Patricia McMahon and Conor Clarke McCarthy is the story of a family going to China and bringing home a daughter who appears to be two or a little younger.  The mother is telling the story to Claire, the daughter, when she's a little older, but on every page there's a sidebar with commentary the brother wrote as events unfolded.  Son and parents are embarking on this new event together.  Before they head to China, there's a baby shower.  Conor comments: "I think this new sister now has more clothing than I do.  And more toys than I had."  It's bemused, not resentful.  Conor ends up being the first family member to inspire laughter in his shy sister.  And when they're met at the airport by well-wishing friends, Conor is the one she holds on to.

Happy day-after your birthday, by the way.

* I found a book that included a dog!  Do I get the bonus points?