As summer rolls to an end, we continue to be happily distracted by a plethora of great graphic novels. I realized recently, when recommending books to friends, that I have sadly neglected to blog about some of our favorites. Here's a roundup of our latest obsessions:

Nathan Hale's Hazardous Tales
We tend toward the fantastic and fictional in this house, but this historical graphic novel series has obsessed Eleanor and Isabel all summer. There are two Nathan Hales: There's the author and illustrator Nathan Hale, born in 1976, who we first encountered as illustrator of Rapunzel's Revenge and Calamity Jack, and who created this series. Then there's the historical Nathan Hale, the Revolutionary War spy hanged in 1776, who serves as the narrator of the series.

The first book, One Dead Spy, tells the story of the historical Nathan Hale, and provides the frame story for every other book in the series. Hale is on the gallows in New York, about to be hanged by a cheerful, none-too-smart Hangman and a pompous British soldier. He says his famous last words ("I regret that I have but one life to give for my country"), and a giant eagle swoops down, picks him up, and drops him into an enormous magical history book. On emerging, Hale can see the future -- he now knows all of American history. He becomes a sort of Scheherazade, putting off his own death by telling the Hangman and the British soldier one story from American history in each volume of the series, as they comment throughout. There are six books so far, ranging from Revolutionary history to the Civil War (Big Bad Ironclad!), from heroes like Harriet Tubman (The Underground Abductor) to some of the least appealing episodes in American history (Donner Dinner Party). Both of my girls are retaining a huge amount of historical fact from the books; we've had the whole series out from the library all summer.

For a totally immersive world filled with compelling teen characters of both genders, many of whom happen to have powers that allow them control of the elements, check out the Avatar series. We stumbled on them at the library, not knowing anything about the animated Nickelodeon series that preceded them (and which is also really, really good). I read the first out loud to Isabel and Will expecting it to be mediocre, as TV spinoffs so often are, and was happily surprised to find excellence instead. Looking at the title page, I was less surprised: the graphic novels are scripted by Gene Luen Yang, recently named National Ambassador for Young People's Literature, author of American Born Chinese, now also writing a teenage Chinese Superman for DC Comics -- is there anything he can't do?

The Avatar: The Last Airbender graphic novels follow the adventures of Avatar Aang (a teenage boy who is also the connection between the human and spirit worlds, and can "bend" air, water, earth, and fire), and his friends Katara (a water-bender), her brother Sokka (no powers, but funny), Toph (an earth-bender), and Zuko (a fire-bender, and ruler of the Fire Nation). The characters are complex--even the villains, like Zuko's evil sister Azula, have depth--and the plots are immersive. There are three 3-part series out right now: The Promise, The Search, and The Rift. The first volume of North and South is due out later this year. It's looking like we'll all be dressing up as Avatar characters for Halloween.

Giants Beware! and its sequel, Dragons Beware!
These excellent books came as gifts from you. They are the creation of Jorge Aguirre and Rafael Rosado, and join the list of spunky, awesome heroines on our Graphic Novels list page. The sword-wielding redhead on the cover is Claudette, daughter of blacksmith and warrior Augustine, who lost both legs and a hand to a dragon years ago. Behind her are her brother Gaston, who would rather whip up gourmet French food than fight; their friend Marie, daughter of the Marquis, aspiring princess and diplomat; and Claudette's dog Valiant. The two books (so far--it's clear that more are coming) include adventure with a touch of danger, but not so much that they become scary. Encounters with giants, dragons, and evil magic-wielding adults end well for all involved, and include a lot of humor. We're looking forward to more.

Raven the Pirate Princess
I wrote back in January about our love of Jeremy Whitley's graphic novel series Princeless, which combines a feminist sensibility with a racially diverse cast of characters, headed by Princess Adrienne, a fearless black princess who breaks herself out of the tower where she's been imprisoned by her father, makes friends with the dragon who's been sent to guard her, and sets off to rescue her similarly imprisoned sisters. In Book 3 of Princeless, Adrienne meets Raven Xingtao, the Pirate Princess, and now Raven has her own spin-off series. If anything, Whitley takes his characters even further into fabulous feminist territory as Raven assembles an all-female crew for her pirate ship and readies herself to go get her birthright back from her brothers, who usurped her place.

This series feels like it's aimed at a slightly older audience than Princeless -- middle grade and YA, I'd say. There's a little more violence, a little more sexual innuendo (between Raven and her the half-elf, Sunshine, and with her old best friend, Ximena; it's pretty clear that this comic is headed towards a lesbian relationship), and a lot of jokes about stereotypes and cultural appropriation that are very funny to a college-age sensibility. Here's Raven interviewing a bunch of male pirates before deciding she needs to stick to a female crew: 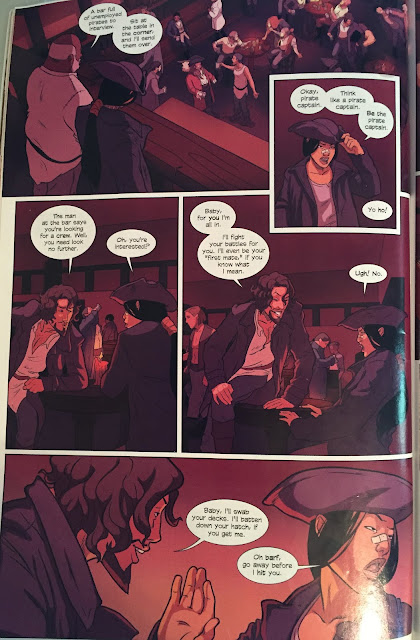 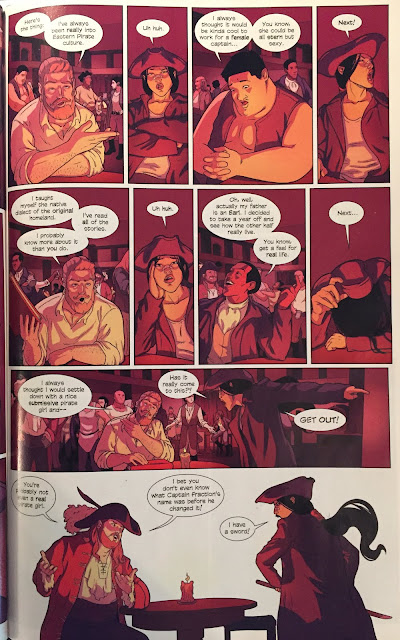 So brilliant. So much love.

There are more, of course (Ms. Marvel! Squirrel Girl! Raina Telgemeier's Baby-Sitters Club!), but I'll save them for another day.

I look forward to hearing about how it feels to be retired from bookselling!