Yes, I would definitely cast Grandma (my mother) as Athena, the smart warrior, rather than Hera, the vengeful jealous spouse.  Athena fits much better.  D'Aulaires' Greek myths are wonderful.  Greek mythology is going through a big resurgence with middle-graders these days thanks to a former middle school teacher who's written a series of 21st-century fantasy novels with contemporary characters who discover they're the half-mortal children of Greek gods and goddesses.  The Lightning Thief and sequels by Rick Riordan have been wildly popular.  In terms of literary merit, they're a bit too slam-bam action-action-action for my taste, but they've whetted the appetite of the post-Harry Potter generation for mythology.

In our household, while we loved the Greek myths, we came back many times to
D'Aulaires' Book of Norse Myths. They gave the Norse myths the same written-for-kids but not dumbed-down treatment.  I like the Norse gods better: they're not as pouty, although they're certainly plenty quarrelsome.  And they were ultimately mortal: killed off when Christianity arrived. The central caring-but-tragic relationship between Odin and the trickster Loki is wonderful.  And many of the stories have a great sense of humor.  Consider the story of Skade, a maiden from the rival world of the Jotun.  The Norse gods have killed her father and she demands that they pay a fine.  They offer her a Norse god as a husband, thus elevating her to goddess status.  She agrees, on the condition that they must first make her laugh.  Loki ties himself to a billy goat, eventually resulting in laughter.  Then they give her the pick of the gods, on the condition that she must choose by looking only at their legs -- which she's clearly giving much thought to in this illustration: 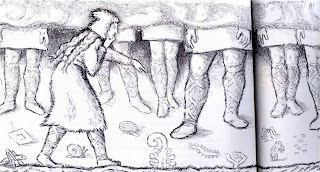 She ends up picking Njord, who loves the seashore, while she's a big skier and loves the mountains.  They spend nine days at the seashore, and another nine in the mountains, then agree to live separately.  "Thereafter he and Skade seldom saw each other, but in a friendly fashion they went together to all godly gatherings.  Skade stayed in her mountains and become the goddess of skiers."

And while we're on the subject of the Norse crowd, I'm quite fond of a recent book by Neil Gaiman,
Odd and the Frost Giants.  In it, a boy leaves his village on a fjord and in the wild meets a bear, a fox and an eagle.  While they believe he's asleep, the animals speak with each other, but when Odd says he's been listening, they deny (in words) that they can speak.  It turns out that they're Thor, Loki and Odin, enchanted into their current forms and kicked out of Asgard, the home of the gods, by the Frost Giants.  The three spend much of their time bickering amusingly, while Odd turns out to be the only one with any common sense.  He ultimately acts sensibly and bravely and restores the gods to their home.  It's quite short, a good early chapter book  Gives one a taste for the Norse stories.

Deborah
Posted by Deborah at 9:30 PM