And happy Thanksgiving to you!  We missed you and your sweet potato biscuits, but my mom did a masterful job with the Johnson family pumpkin pie, and apple pie to boot.  It was a good day.

This is the first year that Eleanor has begun to be exposed to, and to take in, the Thanksgiving story.  It's interesting -- I remember getting all dolled up in elementary school in construction paper Pilgrim and Indian hats and headdresses, way back before I'd read Howard Zinn's A People's History of the United States and started realizing how much had been revised and left out, and I found myself wondering recently how the story would come down to Eleanor and Isabel.  At preschool, they've done a nice job: they talked about the Pilgrims, and Eleanor came home to inform me solemnly that the Pilgrims came on a ship, "but they weren't the first people here."  Then they had homework: for Friday, each kid was given a plastic grocery bag and asked to fill it with the possessions they'd want to take with them on the Mayflower.  Evidently Eleanor really thinks the New World needs a Snow White Barbie doll and a plastic fireman's hat, among other things.  Her friend Ella (who I am sure will be massively into Ella Enchanted when she gets old enough) was a little more practical, and brought a lot of snacks. 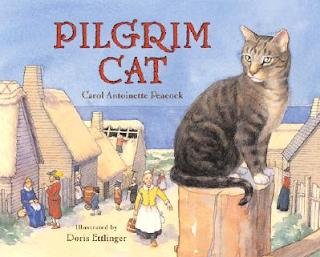 Our first exposure to the Thanksgiving story actually came earlier this year, when we took the book Pilgrim Cat, by Carol Antoinette Peacock, out of the library.  I didn't realize at first that it was a Thanksgiving-related book.  It's decent picture-book historical fiction, about a young girl, Faith Barrett, who is among the passengers on the Mayflower, and makes friends with a cat who jumps on board just before the ship sails.  Faith and Pounce, the cat, become close friends, and he sticks by her through a difficult and dangerous time.  There's a nice surprise toward the end when Pounce disappears in the New World and is found again having given birth to kittens -- he is a she!  Just after this, there is the first Thanksgiving feast, complete with an accurate description of what they probably ate.  Lots of fish, it turns out.

Pilgrim Cat feels like a nice initial level of introduction to Colonial history.  Some of the story is prettied up a bit: there's no indication, for example, that the arrival of settlers threatens the Wampanoag people they interact with, and all the Pilgrim and Indian encounters are very positive.  But there's some good realism here too: conditions on the ship are described in bleak detail, and while waiting with many other passengers on the ship while some of the men land and build houses, Faith gets very sick with a fever that kills a great number of the people on board.  Eleanor and I had a bit of a discussion about that.  Squanto appears, and there are lovely drawings by Doris Ettinger depicting the daily activities the Pilgrims engaged in.  You get the feeling that Peacock did her research.  Now if only there were a dog involved, perhaps Isabel would be interested too....