If you build it..

School projects.  Get ready -- they may well continue through all 12 grades.  Is this true at Stuyvesant where you teach?  Lizzie and Mona were constantly being assigned some form of art project to go with many different subjects.  Mona even had to do an elaborate poster (with glitter) of a "dream house" for Spanish her senior year -- a project based on a book whose title I can't remember.  It's my impression that the large number of projects was part of their school (and around here it wasn't alone) trying to incorporate Howard Gardner's theory of multiple intelligences into the curriculum.  The concept is that different kids learn in different ways, and expanding the curriculum to more tactile and spatial activities -- like dioramas -- will be a more effective way to teach some children, though all the grades.  I feel silly saying this to you -- you're the teacher here.   What do you think of Gardner?

Projects I'll never forget -- although they weren't all assigned.  When Lizzie's fourth grade studied the Greek gods, she made a fantastic necklace out of Sculpey of the 12 gods and goddesses, using as a guide the D'Aulaire illustration you posted a couple of weeks ago.  She gave it to her teacher, who was quite good, and she displayed it on her wall at school for years.  I coveted it, though.

Then in fifth grade they each had to do "traveling biographies": researching an historical figure, writing a paper, and dressing up as that person and visiting other classrooms to talk about the person.  The project included a self-portrait which was half student/half subject: posters Bob and I have kept ever since.  Lizzie chose Jane Austen, whom she'd just discovered.  And Mona did Prudence Crandall, a white woman who started a school for free African Americans in Connecticut in the 1830s, and was eventually forced to close it by the enraged white townspeople.  That project was wonderful. 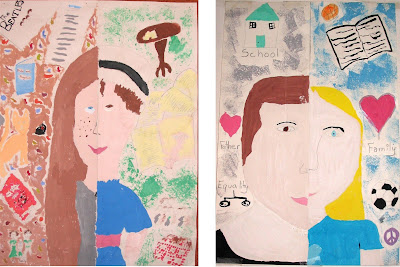 It's a little confusing, but that's Lizzie/Jane on the left, and Prudence/Mona on the right.

Then there was the structure of a cell out of jello.   Turns out that gummy bears dissolve in jello, so you can't really see the ribosomes or whatever they were.

But if you say "project" and "children's book" to me in the same sentence, the first thing that comes to mind is Lizzie's Hobbit birthday party.  It was my biggest June Cleaver moment: I sewed 17 hobbit capes (complete with hoods) for all the guests.  It took about a week, happening in the middle of a huge shut-the-schools-for-a-week snowstorm.  Lizzie is in college now, but the six foot-long Pin the Foot on the Hobbit poster that I drew still hangs above her bed.  He's foot-less -- we've long since lost the furry feet.  All very satisfying but exhausting.  (I'm so impressed with Playing by the Book.)

One last note.  Gina posted a question on your last post asking about books to teach "about kindness, compassion, gratitude, helping others, etc."  It's a great question to kick around, and I intend to come back to it soon.  Gina, I'd recommend starting with Shirley Hughes.  We have two recent posts -- one on her Alfie books, and one on Dogger, the ultimate book about selflessness.

This is a slightly brief post tonight because we're off to the airport to pick up Mona, coming in from California.  Thanksgiving approaches.

Deborah
Posted by Deborah at 6:52 PM