The first major season of school projects is upon us in the toy store.  During the year there are three or four waves of  parents, sometimes accompanied by their children, looking intensely for materials to make posters, dioramas, models of cell structure, maps of their neighborhood, mini-sarcophagi -- the list goes on and on.  A few days ago a mother was looking for material for a shoebox diorama of a scene from
Ozma of Oz, her son's current favorite book.

There was a time in our household when Ozma got almost as much play as The Wizard of Oz.  It's the third book in the voluminous Oz series and still sparkles with the originality of the first.  Dorothy is not in the second book, The Marvelous Land of Oz, which tells the origins of Ozma, and her ascent to the throne of Oz.  For most of book two, Ozma is under a spell which has turned her into a boy. (So interesting - Baum's imagination! And I'm not even going to get into the revolution of women armed with knitting needles.).

Book three starts with Dorothy adrift at sea in a chicken coop with a chicken who can suddenly speak -- showing that she's crossed over into the lands of magic. "'How is my grammar?' asked the yellow hen, anxiously.  'Do I speak quite properly, in your judgment?'  'Yes,' said Dorothy, 'you do very well, for a beginner.'" The chicken, named Billina, is a wonderful character, and Dorothy soon connects with Tiktok, a spherical wind-up robot. They are in the Land of Ev, which borders Oz.  The royal family is being held captive by the evil Nome King, so Dorothy and friends call on the regent of Ev, Princess Langwidere (languid air - get it?).

When that mom said her son was doing a diorama in a shoebox, I suggested building the Nome King's underground caverns.  But he had already decided on doing Princess Langwidere's chamber.  Because the amazing thing about this ditzy princess is that she has 30 heads, all sitting in cupboards like hats, waiting to be put on.  Before meeting Dorothy, Languidere decides to change her look: 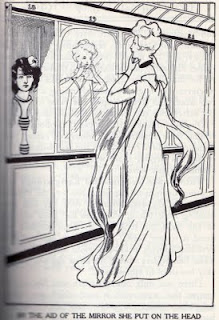 ...after handing head No. 9, which she had been wearing, to the maid, she took No. 17 from its shelf and fitted it to her neck.  It had black hair and dark eyes and a lovely pearl-and-white complexion, and when Langwidere wore it she knew she was remarkably beautiful in appearance.


There was only one trouble with No. 17; the temper that went with it (and which was hidden somewhere under the glossy black hair) was fiery, harsh and haughtly in the extreme, and it often led the Princess to do unpleasant things which she regretted when she came to wear her other heads.

But she did not remember this today, and went to meet her guests in the drawing-room with a feeling of certainty that she would surprise them with her beauty.

She of course ends up grouchy and imprisons Dorothy, who is rescued in the next chapter by Ozma, with whom she becomes fast friends and they go on to do what needs to be done for the royal family of Ev, with help from Billina the egg-laying chicken on the way.

It's just an entertaining book.  It's funny while its characters are taking themselves seriously.  But the ones we're meant to like are all so likable. It cheered me up to know that Princess Languidere is going to be gracing a display table in an elementary school nearby -- and that a boy I don't know has had as good a time with Ozma as we did.

Deborah
Posted by Deborah at 11:14 PM