Lois Lowry, The Giver, the movie, and Maine

I hope that your move has taken place, that it went incredibly smoothly, and that your children have settled in completely.

We’re in Maine now and last Friday I went to the local premier of the movie of The Giver, by Lois Lowry.  I did not have high expectations for the movie, but it was showing in Bridgton Maine, where Lowry lives in the summers, and she spoke after the show. 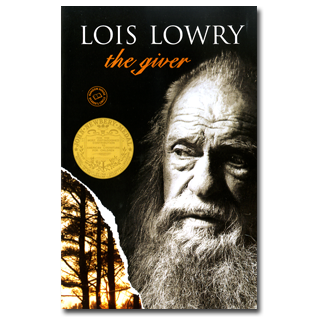 I’ve written about The Giver and about Lowry before: the book is set in a dystopian world where individual freedoms have been sacrificed for security.  Jonas is a 12 year-old who’s been chosen to hold the collective memories of the world for the community members, who have no historical memory.  Jonas kidnaps a one year-old  who is going to be put to death and escapes, traveling across a grim and barren landscape.  The book ends very ambiguously: either Jonas and Gabe are about to be rescued by a warm, Christmas-carol singing community, or else they’re dying and Jonas is hallucinating rescue.

The book gives kids a lot to think about.  It’s about a boy who discovers his own moral compass in the face of a bland and dehumanizing society.  It’s also a good story with suspense and action and complex characters.  Lowry, who emphasized on Friday that she wrote the book for kids, not for grown-ups, has great respect for her readers.

Okay.  So, the movie.  Sigh.  It’s not unalleviatedly awful.  Some of the details worked well.   It presents the monochromatic world of the book in visually very satisfying ways.  And  it felt well, okay, that Jonas has been moved up from 12 years old to 16: he and his contemporaries still have a kind of young naive air about them.  But then there’s the love interest (not in the book!), and the evil Meryl Streep who would fit right into the Hunger Games or Divergent movies.  A question about the expansion in the movie of the repressive Streep character is what prompted Lowry to say that she was writing her book for kids, not adults.  Jonas’s moral journey is there, but it takes place in labored speeches.

Lowry was in the awkward position of being part of the publicity machinery for an imperfect but not disastrous movie.   She was very diplomatic, but still gave some hints.  She had no control over the final product, but she said she had some strong disagreements with Harvey Weinstein, one of the film’s producers.

“I had a lot of arguments with Harvey,” she said.  “He won them all.”  The disagreement she discussed was about the ending, which was portrayed too clearly as a magically happy transformation, rather than as the ambiguous one she had written.

Such a contrast to her acceptance speech when she won the 1993 Newbery medal for The Giver.  She had won it three years earlier for Number the Stars:

I think the 1990 Newbery freed me to risk failure.  Other people took that risk with me, of course, One was my editor,  Walter Lorraine, who has never to my knowledge been afraid to take a chance.  Walter cares more about what a book has to say than he does about whether he can turn it into a stuffed animal or a calendar or a movie.