Your comments about My Side of the Mountain hit home -- yes, I think some of what I'm responding to negatively has to do with the ways in which the attitude toward nature feels dated and a little twisted. I'll check out some of the survival novels you mention. And I look forward to hearing more about contemporary fantasy authors -- I'm sadly under-read in that area.

My good friend Holly, however, is deep into fantasy with her son Ian. Not just any fantasy, of course: fantasy about dragons. Holly has blogged here before about dragon picture books (as well as  outer space, map books, and kid-appropriate adventure and peril).  I've been hearing a lot in recent months about the dragon chapter books Holly and Ian are reading, and I asked Holly to write up her thoughts on their favorites.  Here she is:

One thing that has astonished me as a parent is the unflagging, focussed passion kids can have for their chosen interests. While my son Ian will stubbornly refuse to accept that last week he liked kiwi, he remembers every dragon related incident in his life seemingly from birth and will literally weep sometimes when he describes how much he would like to be a dragon. For good or bad, I’ve supported this obsession, and thus my unending blogs about dragon books! I have become quite a connoisseur of this genre, and I’m happy to pass my expertise along.

This past Christmas, Annie’s family gave us The Enchanted Forest Chronicles (Dealing with Dragons, Searching for Dragons, Calling on Dragons and Talking to Dragons), by Patricia C Wrede. The series begins with Princess Cimorene, who wants to break away from the expected role of princess. I have to admit I find this a little played out. I think Ian has had much more exposure to this sort of smart sassy sword-wielding anti-establishment Princess than to the convention which she is rebelling against, so I wonder what he makes of it.

In any case, she soon runs off to become a princess for a dragon named Kazul, where she cooks and gets to organize her treasure, magical objects and and her library (my dream job) while discouraging the princes who, following society’s expectations, come to rescue her. She discovers a plot by the wizards to poison and usurp the King of the Dragons. Cimorene, clever and level-headed, foils their plans with the help of a witch, another princess, a stone knight, and lots of good magical spells and gimmicks. At the end of the first book, Kazul becomes King (female or male ruling dragons are called Kings) and Cimorene’s happy ending is staying on with her to be her princess.

The books are all told from the points of view of Cimorene’s companions, Mendanbar (King of the Enchanted Forest), Morwen (a witch with lots of cats), and Daystar (spoiler alert! Cimorene and Mendanbar’s son) as they go on quests to foil the wizards. There were times when I felt the action lagged as the characters travelled in groups and had to discuss and review everything constantly, but perhaps this is necessary for young readers. But each book was full of magic and likeable characters on an new quest without any actual danger or loss -- totally engaging for Ian.

Cimorene and Mendanbar fall in love, marry and have a child, but this is not central to the story or Cimorene’s action, which I appreciated. I enjoyed the fact that in the third book Cimorene is pregnant but this is hardly mentioned as she initiates a quest to retrieve Mendanbar’s sword from the Society of Wizards, embarks on risky teleportations, slogs through a swamp, rides a winged blue donkey, is enchanted and attacked by deadly invisible plants, etc. before returning to the Enchanted Forest to find her husband trapped in an enchantment by the wizards. At the end of book three she plans to live incognito with her newborn son, raising and training him on her own so he can use his inherited powers to rescue his father. I have to admit, the female characters in this series really won me over.

My second recommend for a girl-centric series would be Dragon Slippers by Jessica Day George, starring another “non-conventional” girl who makes friends with a dragon rather than being saved by a knight, moves to the city on her own, succeeds in the dressmaking business, and helps the misunderstood dragon population defend itself against various attacks. However, Ian was not into this beyond the first book. Not because there are a lot of descriptions of dresses (and there are) or because our new-fangled heroine falls in love with a prince (yes, she does), but because there are wars and dragon deaths and slavery and it becomes pretty intense, and will probably be more appropriate at a later age, if he’s still game for dresses and romance.

Another series that Ian wants to go back to frequently is The Dragonology Chronicles by Dugald A. Steer. Set in the 1800s, it follows a brother and sister, Daniel and Beatrice, as they are educated in Dragonology by Dr. Drake, the credited author of Dragonology: the Complete Book of Dragons.  Throughout the four books they help defend the dragon world against attacks from various evil power-hungry humans. It has everything you need in a dragon story: magical artifacts, riddles, traps, secret codes, various species of difficult to befriend dragons and dragon eggs that need hatching. It is action packed and at times quite scary. The series ends as dragon stories often seem to: dragons and people are not able to exist in the same world and there is a sad parting between boy and dragon. See also Jeremy Thatcher, Dragon Hatcher by Bruce Coville and Puff the Magic Dragon (Ian forbids us to sing the last verse). 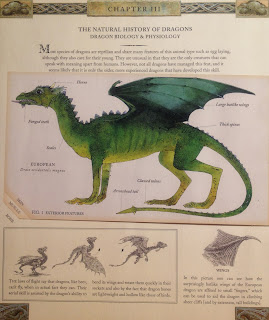 OK, one more! We both really liked this one. We recently finished
Dragon Rider by Cornelia Funke. Not a series (phew!). A dragon named Firedrake sets off to find a safe place in the modern world for dragons to live accompanied by a forest Brownie, a grumpy cat-like creature named Sorrel.  A wise old dragon instructs them to seek the Rim of Heaven, a hidden valley in the Himalayas where he was born and he is certain a group of dragons still remains. When they stop in a city to get a fabulous map from a genius rat, they meet a young, amazingly well adjusted boy named Ben with apparently no human connections and no back story, who joins their quest. Along the way, they are betrayed by a mountain dwarf to a horrible man-made golden dragon named Nettlebrand who was created to hunt dragons and has seeking them since they have become rare and hidden in the world. Nettlebrand sends his servant, a man-made homunculus named Twigleg, to spy on Firedrake and find the location of the Rim of Heaven.

When they are blown off track and Sorrel is captured, they meet a scientist named Dr Greenbloom who is derided by his colleagues because his specialty is fantastic creatures. He helps the group by sending them to a djinn for directions and giving them one of Nettlebrand’s golden scales. While the quest continues, Twigleg comes to love Ben and works against Nettlebrand’s interests. It is a long and exciting book with many fantastical creatures. It culminates in an all out battle in the Rim of Heaven between our heros and Nettlebrand in which none of our heros get hurt and Nettlebrand is defeated but doesn’t actually die. We were braced for a boy-dragon farewell scene, since Ben was clearly going to go live with Dr Greenbloom and his family and the dragons were being pushed farther into isolation by human ways. Ian went ahead and started sobbing in anticipation, but then, wonder of wonders!:

“You need human beings the way I need the other dragons, the way Sorrel isn’t happy without the other brownies to quarrel with. Without human beings, you’d start to feel very lonely.”

“I’ll feel lonely without you dragons, too,” said Ben, looking away from Firedrake.

“No, no!” Firedrake rubbed his head very gently against the boy’s. “Believe me, we shall meet again. I’ll visit you as often as your short human life allows.”

“Oh, yes, please,” replied Ben. “Visit me often.” And he put his arms around the dragon’s neck and hugged him as if he would never let him go.


That is what, in this house, we call a happy ending! Until we manage an actual boy to dragon transformation, this is pretty much as close as we can get to a perfect dragon experience. But, that doesn’t mean we’re done! The quest for dragons continues! Wish me luck.