Thanks so much to Holly for another excellent guest post!  She and Ian are such experts in the dragon field that I'm not sure I can add any they don't already know -- but I'll give it a try.

The Dragon Keepers series by Kate Klimo is more complex than early chapter books, but won't be as gory and grim as some older dragon books.
The Dragon in the Sock Drawer is the first of the series: successive books put her in the driveway, the library, the sea, etc.  The stories start in the present day when two kids (boy and girl cousins) find a dragon egg in a sock drawer.  As in Jeremy Thatcher, Dragon Hatcher, the first challenge the kids face is how to keep a rapidly-growing noisy baby dragon a secret from the grown-ups.  The villain in the books is the centuries-old St. George, and the adult ally is a dragon expert they locate through Google.

I haven't read the Dragon Chronicle series by Susan Fletcher -- it might get a little scary.  The first in the series,
Dragon's Milk, involves a magical world where some people are "dragonsayers" -- they can communicate with dragons.  A girl sets out to find a nursing mother dragon because she needs the magical dragon's milk for her sick sister.  One thing leads to another, the mama dragon dies and our heroine has three baby dragons on her hands and bad guys wanting to do them in. Lots of action, but a sense of humor too. 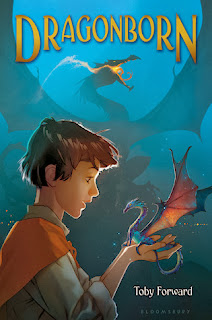 And there's one more -- sorry, it, too is a series -- that might appeal very strongly to Ian:  Dragonborn by Toby Forward.  The first book has a wonderful scene of a magician conjuring up a very small dragon for his apprentice (see illustration on cover).  The dragon grows (see background of illustration), boy and dragon bond, including telepathically.  The magician dies early in the book and the boy, Sam, has to sort out which of the magician's previous apprentices are good guys and bad guys, and who is the major Bad Guy of the book.  A fairly tough girl enters the action, and comes back in book #3.  The whole works is called The Flaxfield Quartet.  Book #2, Fireborn, which is a prequel, is due out in the U.S. this December.

So have I come up with any you didn't know about, Holly?  I'll keep looking...

Deborah
Posted by Deborah at 4:42 PM