As soon as I saw those little green aliens, I recognized the hand of David Wiesner -- they're clearly related to the undersea tourists in Flotsam: 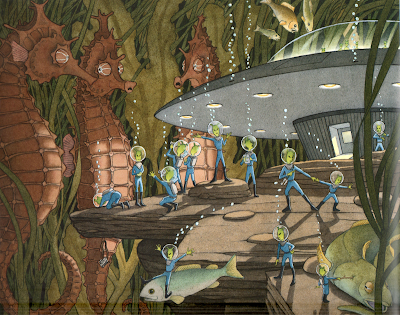 I look forward to Mr. Wuffles!

In the last few weeks, I've had a couple of conversations with parents of boys around Eleanor's age and a little older -- 7-10 year olds -- about books to encourage independent reading. One mom said that her son was only interested in non-fiction; one that hers was mired in Captain Underpants and its ilk. Both were looking for ways to broaden their kids' reading habits.

I suggested that they check out our book lists of early chapter books and middle grade books, and thought in particular of Hero on a Bicycle, Little House in the Big Woods and Farmer Boy, and The Search for Delicious.  I realize, however, that middle grade books are not my area of expertise, and would love to ask you to weigh in.

You've written before about the unfortunate tendency of both publishers and consumers to designate books as "girls' books" or "boys' books," and the assumption that girls will read about male characters, while boys won't read about female characters. Many books are marketed with covers that pigeonhole them by gender, even if their content doesn't. When I mentioned that Eleanor was reading the American Girl books obsessively (30 books to date, and counting), and that I was impressed by the writing and historical detail in them, one mom wondered if there were an equivalent "for boys." Much as I'd like to say that boys would enjoy these adventure and history-filled narratives too, I know it's a hard sell to get an eight-year-old boy to carry around books emblazoned with "American Girl" on the cover. Is there a boy/more gender neutral version of this kind of historical fiction out there?

Happily, Eleanor and Isabel don't have any qualms about cross-gender reading. In easing Isabel into chapter books, in fact, we've recently been reading a number of books with boys as main characters. Two of your recommendations have been big hits.

Isabel liked Stink: The Incredible Shrinking Kid, partly because of the comic book/superhero retellings at the end of each chapter. I wasn't crazy about the book. I made the mistake of not reading through it first on my own (though you warned me to do so!), and was blindsided by the rather grisly death of Stink's class pet, a newt named Newton.  He jumps out of Judy Moody's hands and down into the drain of the kitchen sink while they're cleaning his tank. Judy goes to turn on the light switch to look for him, and hits the garbage disposal switch instead. Isabel was more interested than upset by this development, and requested repeated readings of the chapter, but I can see plenty of kids of both genders who might dissolve into tears.

We're both big fans of The Amazing World of Stuart, by Sara Pennypacker.  Stuart, age 8, has just moved to a new town and is worried about making friends and upset that all of his treasures were thrown away accidentally because they looked like trash.  He copes by making a cape out of 100 ties (he staples them together, with a lone purple sock as a hidden pocket).  In each of the following chapters, the cape's magic sets off an adventure: Stuart finds seeds in the pocket and grows giant plants bearing hot buttered toast; Stuart's cat and his neighborhood sanitation man switch bodies, and Stuart has to pick up the trash; Stuart gets locked in the bathroom at school and sneaks out through a hole which he can fold up and put in his pocket.  There is no discussion of the weirdness or improbability of these events.  Stuart's parents seem oblivious to them, and I wondered at first whether all would be revealed as Stuart's imagination, but that never happens either.  Isabel is lately into telling a lot of largely made-up stories about her own life, and continues to want Little Nemo above all other reading at night, so a book which blends the realistic and the fantastical is right up her alley.  We're reading it on repeat. Thank you for this one!