Some evenings I sit here in the dining room facing a large box full of F and Gs, "Folded and gathered": the book business term for unbound picture books which are sent out as samples to book buyers.  So I admit I occasionally blast through them kind of quickly, looking for something that will catch my eye and slow me down enough to read it thoroughly.  Last spring I was moving along so rapidly that when I found a wonderfully strange wordless book, I didn't even notice the name of the author.

It was about a house cat who discovers a very small alien space ship which looks remarkably like a cat toy: 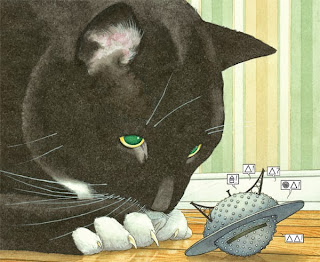 The cat bats it around, causing the little green people in the vehicle to sustain alien bruises, hold their heads, and discover that a crucial piece of equipment has been broken.  So they leave the ship and make a run for it...

...  to safety beneath a radiator.  There they find a series of paintings showing that the cat has been terrifying small beings for a while:

They also discover the ants and ladybugs who seem to have been doing the painting.  It may be hard to see in this picture, but the insects are speaking a language very different from the aliens'.  This leads the green people to draw a picture of the cat chasing their spaceship, and ants and aliens become friends.  They post for pictures (note the green people saying "cheese!"), share food, and get better at communicating: 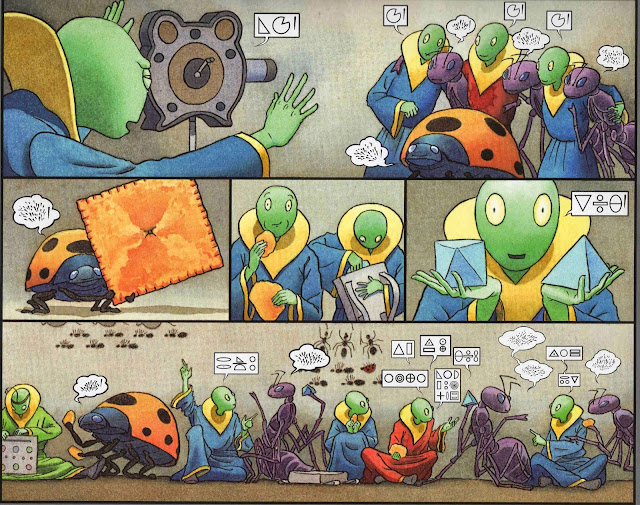 While the cat sits mesmerized outside the radiator cover, the insects find the solution to the broken equipment problem and the group comes up with a game plan to get the aliens back to their ship.  There's a photo finish, and a lovely ending.

What a book!  When I closed the F&G, imagine my surprise when I discovered the author/illustrator is the great David Wiesner, creator of Flotsam, Tuesday, Art & Max, and several other amazing books.  He's won the Caldecott Medal for best illustration three times. 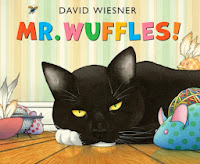 He's done another amazing one with
Mr. Wuffles!, which went on sale this week.  The plot is delightful, but there are so many other aspects.  The emotions of aliens and ants are so vividly described in body language.  And Wiesner's alien language in the speech bubbles makes me want to try decoding it.  I haven't even described any of the cat/human interaction in this story, and the pitch-perfect way Wiesner captures both feline indifference and cat obsessive concentration.

So here's a great little video from Wiesner explaining the book and giving action shots of the model for Mr. W.  (Not a cat video!).