Your latest box of gifts, which arrived recently for Isabel's birthday, contained a number of gems, including one which has become Will's favorite book.

I haven't yet written much about Will's taste in books: at close to 8 months old, he's mostly interested in slapping at them and trying to eat the corners.  But he's gotten to that excellent baby stage where he thinks pictures of other babies are awesome.  We're hitting some of our favorites in this category, of course: Baby, Baby; I Love Colors; What's on My Head?

Eating the Rainbow is another good board book to engage this phase.  It's full of bright colors, adorable multi-racial babies, and healthy eating suggestions -- what's not to like?  Each two-page spread contains a picture of a baby eating a fruit or vegetable, with several other food items of the same color laid out on the facing page. It's good for baby faces now, and will be good for color and food recognition later, as well as supporting the idea that fruits and vegetables are good things to eat.  Will looks at these babies and laughs out loud. 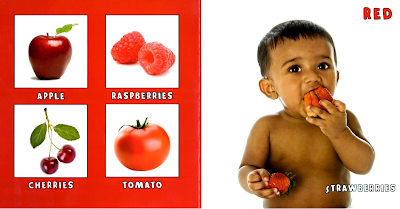 In my free time, I've been reading some really good YA fiction.  I finally got Wonder from the library, and devoured it.  What a good book -- the kind where the characters feel immediately like real people, and start to inhabit your thoughts throughout the day.

Poking around online, I came across a story that led me to Eleanor & Park, a YA novel by Rainbow Rowell.  I'd never heard of Rowell, but after reading the book, I've put library holds on the two other books she has out, and will be watching for her new work.

Eleanor & Park is a YA misfit love story, set in 1986 in Omaha, Nebraska.  Eleanor is big and red-headed and poor, living with her mom, siblings, and abusive stepdad in a tiny house.  At school, she's bullied quite badly.  Park is half-Korean, into comics and punk music, popular enough but definitely other.  They fall in love, and Rowell writes about it in such specific, evocative detail that it made me feel like I was 15 again.  Holding hands on the school bus is the most intense of experiences:

As soon as he touched her, he wondered how he'd gone this long without doing it.  He rubbed his thumb through her palm and up her fingers, and was aware of her every breath.

Park had held hands with girls before.  Girls at Skateland.  A girl at the ninth-grade dance last year. (They'd kissed while they waited for her dad to pick them up.) He'd even held Tina's hand, back when they "went" together in the sixth grade.

And always before, it had been fine.  Not much different from holding Josh's hand when they were little kids crossing the street.  Or holding his grandma's hand when she took him to church.  Maybe a little sweatier, a little more awkward.

When he'd kissed that girl last year, with his mouth dry and his eyes mostly open, Park had wondered if maybe there was something wrong with him.

He'd even wondered -- seriously, while he was kissing her, he'd wondered this -- whether he might be gay.  Except he didn't feel like kissing any guys either.  And if he thought about She-Hulk or Storm (instead of this girl, Dawn), the kissing got a lot better.

Maybe I'm not attracted to real girls, he'd thought at the time.  Maybe I'm some sort of perverted cartoon-sexual.

Or maybe, he thought now, he just didn't recognize all those other girls.  The way a computer drive will spit out a disk if it doesn't recognize the formatting.

When he touched Eleanor's hand, he recognized her.  He knew.

It's a gripping read, moving and real.  Like Wonder, Eleanor & Park doesn't shy away from the complicated ways that teenagers are both affectionate with and cruel to each other, or from the horrendous circumstances that many kids grow up through.

So of course it's been censored.  Some high school librarians in Minnesota liked the book so much they offered it as a community read, and invited Rowell to speak.  Then a couple of parents got hold of the book and counted up the curse words in it (apparently without taking much else in as they went through) and decided that it was "dangerously obscene."  Here's Rainbow Rowell talking about it in a brief interview.

I'm no fan of censorship in any case, but here it seems particularly misguided.  Eleanor and Park are good kids, and the vast majority of the cursing in the book comes from Eleanor's stepfather and the kids who bully her -- it's language she and Park feel as abusive, and try to move away from.  Linda Holmes writes thoughtfully about this issue on her NPR blog, here.  This is the kind of book I hope Eleanor, Isabel, and Will will be reading when they're 15.