Ah, so many books, so many kids.  I'm glad that Isabel's liking The Amazing World of Stuart.  I'm very fond of the idea that once Stuart owns a cape (made of dad's ties), of course he can fly.

You've asked a big question in that post -- about books to engage newly-independent readers, especially boys.  You've pushed two of my buttons on this one -- so I'm going to sound a few brief cautionary notes, then go on to the first of two lists.


One mom said that her son was only interested in non-fiction; one that hers was mired in Captain Underpants and its ilk.

So?  What's wrong with non-fiction?  I run into many parents who feel it's not really reading unless it's fiction, or seriously good fiction.  It's all reading, it all exercises those getting-comfortable-with-reading muscles, and if it's what interests the child, it will reinforce the concept that reading is something you do for enjoyment, not obligation.

I think the Stuart Little Problem comes up a lot for parents.  Every parent remembers wonderful books from his or her own childhood, but we tend to forget both what ages we were when we read them, and the mountains of other books we were reading which have faded from memory.  Children have a lot of years to read amazing classics -- both ones their parents loved, and new ones they'll discover.  Right now a kid may be mired in one type of book only -- but as with everything else in their lives, new ideas will appear, horizons will open up.  It all doesn't have to happen at once.

Then there's the boys-are-harder-to-engage-in-reading argument.  Twenty years ago, every three year-old girl wasn't obsessed with being a princess, and every boy wasn't a reluctant reader.  These trends rise and fall in our culture, molded by lots of influences.  We already know how the Disney machinery pushes pink princesses.   Somehow, in the separation-of-the-genders gestalt that's going on these days, the concept that boys have a harder time with reading than girls is reinforced.  I know it's hard for parents to navigate through all this, but I'm a firm believer that it's possible to find books to connect with every child.

Here are a number of history-based series, most of them not exclusively girl-centric, that engage a lot of kids, starting with non-fiction:

I've written about the Who Was... series before: a wide variety of very readable biographies, of people from Ferdinand Magellan to Steve Jobs.  Those folks have just launched a What Was... series, which so far includes Pearl Harbor, the March on Washington, The California Gold Rush, The Boston Tea Party, The Battle of Gettysburg, The First Thanksgiving and (near to my heart) The Alamo.  The Underground Railroad is scheduled for December.  They tend to appeal to first to fourth graders.  These folks seem to be making an effort to balance between books about war and ones about other kinds of events.

There's a whole subgenre of historical fiction on books about kids -- usually boys -- in wartime situations. They tend to aim at second to fifth graders in reading level and intensity of some of the topics.

Scholastic did a hardcover book series of fictional diaries of boys called "My Name is America" -- they were companions to "Dear America" girl diaries.  Diaries often appeal to new readers because each entry is usually shorter than your average chapter.  Like the American Girl chapter books that Eleanor loves, these diaries are written by significant kids' book authors, among them Walter Dean Myers, Kathryn Lasky, Laurence Yep, Joseph Bruchac.  I'd guess about half of them are combat related: American Revolution, Civil War, World War II, Vietnam.  But they also include topics like the Negro Leagues, the Lewis and Clark expedition, and the transcontinental railroad.  Scholastic has started re-issuing the boy diaries as paperbacks and they seem more appealing that way than in the hardcovers.

Lauren Tarshis pushes the envelope on action and danger further than most with her series, "I Survived."  I was a little skeptical about this series at first (I haven't read them), but it's developed a loyal following.  Kids -- both boys and girls -- come to the store eagerly looking for new books in the series within days of their publication dates.  Each of these novels follows one boy in the midst of an historical event: she takes on Gettysburg, Pearl Harbor, and the Titanic among others.  But she also goes where few kids' book writers have before: The Shark Attacks of 1916, Hurricane Katrina 2005, The Japanese Tsunami of 2011, and The Attacks of September 11, 2001.  Needless to say, a parent would want to check them out a bit more, but they do touch kids' interest in disaster.

And then there's an odd but still attractive history series modeled on the "Choose Your Own Adventure" formula.  "You Choose: An Interactive History Adventure" books are all written in the second person.  You, the reader, are put in a situation where you determine what happens next.  Sometimes, as in You Choose: World War II Navy, you're deciding what character you are: 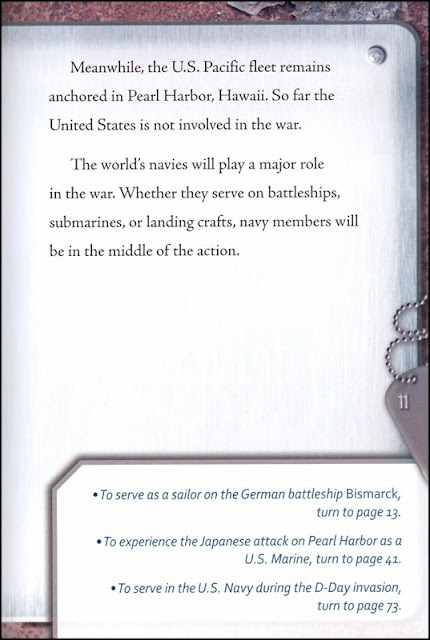 Other times, you're choosing the next action your character takes, as in You Choose: The Harlem Renaissance: 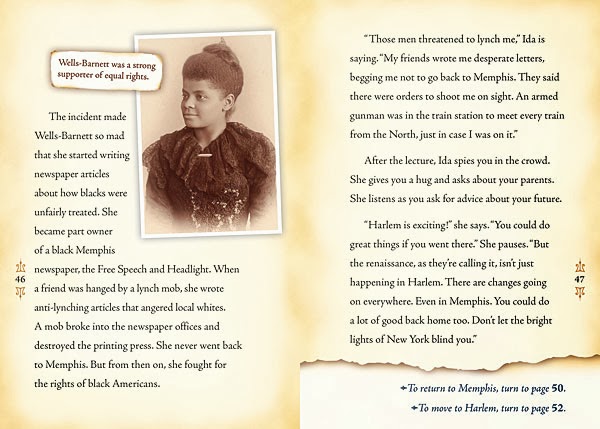 This form gives kids a number of features lacking in other books of this length.  Because you're skipping pages to get to the pages that you've chosen, the story you read at any given time is significantly shorter than the whole book.  And you can read and re-read many times before you start repeating, so it stays fresh for quite a while.  Topics range all over the place: many wars, immigration, pirates, Dust Bowl, Oregon Trail, many others.  The combat ones have the hazard of sometimes ending your story, after you've made several choices, with "You die."  Here's the only list I can find of most of the books.  It's on an education site, so it lists library-copy prices.  They're all in paperback too.

This post answers only part of your question about elementary school series.  I'll do part 2, on more whimsical fiction, soon.