I haven't thought of The Worry Week in years, but I remember loving it as a kid, especially Alice's dreamy Shakespearean passages.  I modeled a lot of my 4th and 5th grade writing on Anne Lindbergh.

Our first guest blogger for this portfolio-grading season is Holly, who has blogged for us before about outer space, map books, and kid-appropriate adventure and peril.  Here she is:


After all this great discussion of summer books, I am really tempted to write about a book we read just recently (and that I wish I’d read when I was a kid): Gone Away Lake by Elizabeth Enright. However, I have had specific instructions from Ian to write about our favorite dragon books. Dragons are his most recent obsession, but of course all dragon books must be bloodless and have dragons as the good guys. No St George stories for us.

We actually just finished Thomas and the Dragon Queen, which Annie already blogged

about, but before that was Kenny & the Dragon by Tony DiTerlizzi. Like Thomas, the real hero is Kenny, a young underdog (well, under-rabbit). Kenny is a book-loving, somewhat nervous rabbit whose earthy father discovers a dragon while bringing home the sheep (always interesting to me when these anthropomorphised animal books also contain real animal acting animals). Kenny overcomes his fears and befriends the dragon, Graham, who turns out to be a charming poetry-writing intellectual who eats nothing more meaty than creme brulee. 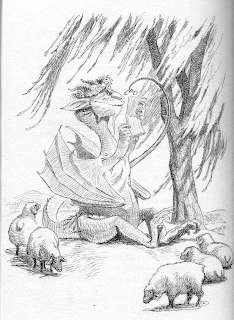 The problem is that the nearby town panics when the dragon is spotted. The king sends a retired knight to exterminate him and the town mobs the hillside to witness the fight. A wonderful team assembles around Kenny to find a way to save Graham and Kenny is the one to come up with a very appealing plan, inspired by Shakespeare! They defuse the mob’s lust for blood by giving them exactly what they really want -- a good performance with a battle between good and evil. All ends well, of course, -- Kenny stands up to the town bully, makes friends, bonds with his dad and gets to be best friends with a dragon!

One of our favorite dragon picture books is about a different kind of dragon. Jin Jin the Dragon by Grace Chang begins: “One spring day, when the willow trees had turned green and the wind was softly blowing, a golden creature hatched, unnoticed, from a thousand-year-old egg.”

The gentle curious Jin Jin begins the book not knowing what kind of creature he is, and, in that classic and comforting story way, meets a series of creatures who claim him as one of their own based on one of his physical characteristics. In searching for his own identity, he discovers and learns about Chinese characters hidden in the landscape. At the end, he finds out his own nature and saves the land from a drought by breathing water. All the characters he has met along his journey show up for a big party at the end -- a trope that I happen to use pretty often in my own stories.

Bridging the dragon gap is East Dragon West Dragon by Robyn Eversole. I love the pictures in this book -- every time we read it we find some new hidden detail that makes us laugh. It is one of those ignorance and prejudice overcome by friendship created in crisis books (you know!). 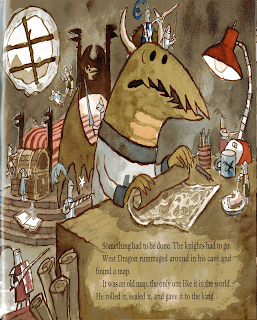 Here you have East Dragon, golden, revered, and a great swimmer and there is West Dragon, green, harassed by knights, and winged. When West Dragon’s knights attack the East Dragon and are thrown in the dungeon, West Dragon comes to rescue them and ends up being rescued in return by East Dragon. And guess how it ends?

“So they looked at each other, smiled, and offered to take the king and his knights home in style, on the backs of ten leaping, diving, somersaulting dragons to the king’s castle for a festive, friendly, somewhat messy, slightly rowdy, long, dragon visit!”