Like you, I revisited My Side of the Mountain a few years ago.  It's assigned a lot in fifth grades in our area.  What struck me was how out of date it seemed.  It's the story of a young man who goes off to live by himself in nature, but the first thing he does is hollow out a centuries-old tree with fire.  His attitude toward his surroundings was one of using it for his needs: burning the tree, stealing a falcon from its nest.

That book leads one to think of the uber-survival novel: Hatchet, by Gary Paulsen.  A light plane goes down in the wilderness of northern Canada, with the sole survivor a teenage boy whose only possession is a small hatchet.  Unlike My Side of the Mountain, Hatchet is filled with self-doubt, and the trials of a young man who starts out completely clueless about how to survive.  It's an older read: the first chapter includes a graphic description of the pilot dying of a heart attack.  But it's riveting.

If you're revisiting survival novels of your youth, why not take a look at  Island of the Blue Dolphins by Scott O'Dell?   I don't know how it would play for Eleanor.  An Indian girl living alone on an island off the coast of California.  Lots of figuring out how to fend for oneself, and defending against predators.

Last weekend was the National Book Festival here in D.C.  I missed one day of it because I was hosting several authors -- including Mark Teague and Tamora Pierce! -- who came by the store to sign copies of their books.  It was a pleasure to meet them -- they were in town for the festival.  On Sunday I managed to get to the mall and hear a number of kids' authors.  What struck me most this year, though, had to do with the people in the audience.

During Grace Lin's presentation, I sat next to a middle-aged woman from Pennsylvania who was getting her PhD in children's literature.  Her dissertation is on kids' books about racially mixed families.  When Susan Cooper spoke, I wasn't very aware of the woman sitting on my right until, when the audience started moving out, a young woman appeared on my left, leaning over me, and breathlessly asked my seating companion if she had spoken on a panel the day before.  Yes, she had.  "Oh, you're,  you're -- "  "Megan Whalen Turner," the woman replied, smiling, "Yes I am."  They walked off together.  She's the author of a much-loved fantasy series set in Attolia (see Tui's comment here).

Wow -- I've just mentioned three major fantasy writers (Cooper, Pierce, Turner) who I saw last weekend, none of whom we've blogged about at any length.  So much still to do!

But back to book-lovers.  Mark Teague, illustrator of the Poppleton books and the cloying but well illustrated How Do Dinosaurs... books attracted a crowd whose average height must have been about four feet tall.  Dozens of kids lined up to ask him star-struck questions about his work.  It was pretty much the same four questions over and over, all of which he answered with warmth and humor.  The whole festival made me feel great about the future of reading.

So I leave you with the first eight panels of Lynda Barry's "20 Stages of Reading," a work commissioned by the Washington Post to publicize this year's Book Festival: 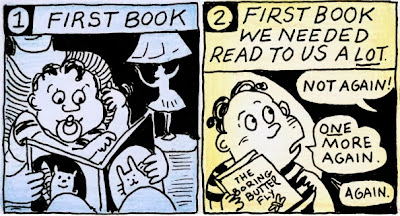 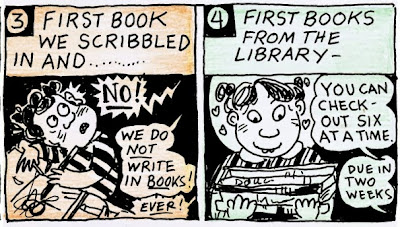 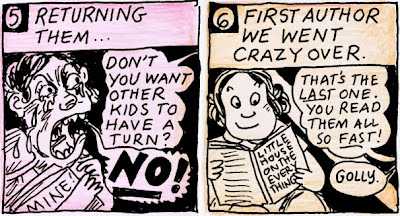 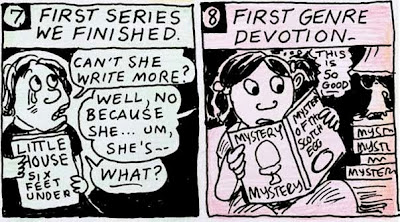