East of the Sun and West of the Moon

I love your suggestions for encouraging Isabel toward chapter books. I've ordered the read-aloud version of James and the Giant Peach for her birthday -- I think Roald Dahl's humor and meanness might work very well for Isabel's sensibility, and Quentin Blake's drawings can only help. She responds so strongly to illustrations. 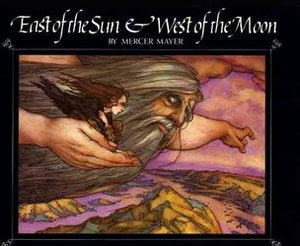 One of our favorite picture books at the moment is a lavishly illustrated fairy tale: East of the Sun & West of the Moon, written and illustrated by Mercer Mayer. This authorship surprised me a few weeks ago when we picked up my childhood copy of the book at my parents' place (sadly, the book is out of print, though there are used copies out there -- the link above is to Alibris). The only other Mercer Mayer books we own are the not-terribly-interesting Little Critter series.  I'd forgotten that Mayer is also responsible for such extreme strangeness and beauty.

East of the Sun & West of the Moon is a retelling of a Scandinavian fairy tale, and contains elements familiar from other fairy tales as well.  A proud, beautiful maiden, the daughter of a farmer, falls on hard times when her parents lose their money and her father becomes gravely ill.  To cure him, she must bring back a clear drink of water from the spring of the South Wind.  She is helped in this by a frog, who asks her to grant him three wishes in return.  Of course she agrees, and her father gets well again; their fortunes are restored, and the young woman has forgotten the frog by the time he shows up and asks to visit her, then to have her hand in marriage.  She refuses him; when he insists she keep her promise, the maiden throws him against the wall, killing him.  It turns out he wasn't a frog at all, but a handsome youth, enchanted by an evil troll princess.  Death frees him from his frog-body, but he is seized by trolls, who take him away to the kingdom "east of the sun and west of the moon," where the troll princess plans to marry him.

The maiden, racked with guilt, embarks on a quest to save the youth from the fate she helped solidify.  She travels through vivid landscapes, visiting enormous wise creatures from whom she asks advice and receives gifts.  Two of my favorites:

The Salamander who lives in the fiery heart of a mountain of ice, and knows "everything that is in the heart of the world." 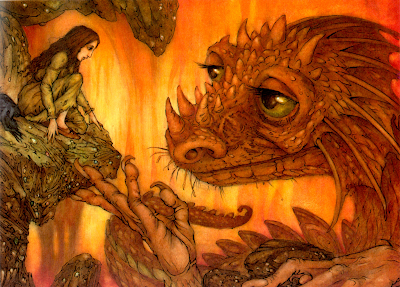 The Great Fish of the Sea, who knows "everything that is in the blood of the world." 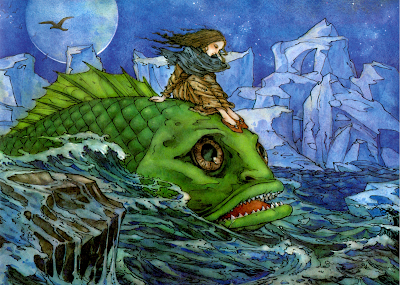 Finally, the North Wind brings her to the land east of the sun and west of the moon, where she works for the troll princess, cleaning floors while the trolls torment her. 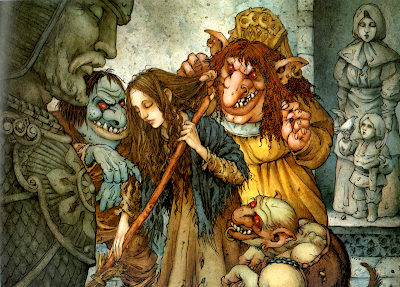 The maiden uses the gifts given to her by the creatures she's met to rescue the youth, who has been frozen in a block of ice, and defeat the trolls.  It's a happy ending, and a somewhat empowering one: the maiden shoots the troll princess in the heart and turns the other trolls to stone with no help from the youth, who looks like he needs a little time to wake up from being frozen.

Mayer's writing is poetic, and the descriptions of the connection between the maiden and the youth pretty sexy at times (Father Forest tells the maiden: "I know what is in your body and in the body of the youth, and I know that your bodies call to each other." Va-voom!). The illustrations are rich and elemental, emphasizing the maiden's smallness in relation to the creatures she meets.  The pictures I've scanned here are the ones which remained ingrained in my memory from my own childhood thirty years ago.  Vivid stuff.

In two days at my parents' place, Isabel asked us to read her this book seven times.  She drank it in.  So this week I'm thinking, if we're not doing so many chapter books just yet, I'm okay with that.