Every fall, I do a poetry project with my freshmen which requires them to choose a poet they're not familiar with and delve into his or her work, creating a personal anthology and emulating the poet's work. As we begin, I ask my students about poets and poems they already know and love. Shel Silverstein is always mentioned, and there is always a collective moment of 14-year-old nostalgia -- kids love him. Of course, then I have the sometimes difficult task of steering them towards other poets who are not Shel Silverstein in order to broaden their horizons.

For the die-hard Silverstein fan, another surefire winner is Ogden Nash. Nash wrote volumes and volumes of light verse, some poems more adult than others. The current Nash poem in the zeitgeist, to our family's great joy, is The Adventures of Isabel.

It's the rhyming story of a spunky girl who confronts a variety of unpleasant creatures (bear, witch, giant, doctor) and defeats them in turn. A sample:

Once in a night as black as pitch
Isabel met a wicked old witch.
The witch's face was cross and wrinkled,
The witch's gums with teeth were sprinkled.

Eleanor is in love with this book, and not only because the heroine has her little sister's name. Bridget Starr Taylor's illustrations are brightly colored and zingy, imagining all the episodes in a fantastic and connected landscape. The rhyme and rhythm are unbelievably catchy. It includes a CD of Ogden Nash himself reading the poem in his slightly creaky voice. After a good friend gave us the book, Eleanor had us read it aloud to her easily thirty times in two days. She can now recite most of it by heart.

If all that weren't enough, I discovered last night that Natalie Merchant has just released a song using the lyrics to the poem.  [The Youtube link we had up here has been pulled due to copyright issues.  New link is a rehearsal recording of the whole song -- same feel, though Merchant isn't totally on top of the lyrics yet.]

If this is the major cultural artifact Isabel has to contend with growing up, we will consider ourselves very lucky.

After posting about Mother Goose a few nights ago, I realized I'd forgotten to mention our other favorite nursery rhyme book:The Helen Oxenbury Nursery Collection. (Of course, it's out of print. Still findable, though.)

I've always thought of Oxenbury as a brilliant illustrator, but evidently she's quite a good editor and adapter as well. The collection is divided into three parts, each excerpted from other out-of-print Oxenbury books: "Verses from Tiny Tim," "Nursery Rhymes," and "Nursery Stories." We started with the first two sections, before Eleanor was able to listen to longer stories, and there are some fabulous rhymes here. The one we chant most often is "Choosing Shoes," by Frida Wolfe:


New shoes, new shoes,
Red and pink and blue shoes.
Tell me what would you choose,
If they'd let us buy?
Buckle shoes, bow shoes,
Pretty pointy-toe shoes,
Strappy, cappy low shoes;
Let's have some to try.
Bright shoes, white shoes,
Dandy-dance-by-night shoes,
Perhaps-a-little-tight shoes,
Like some? So would I.
BUT
Flat shoes, fat shoes,
Stump-along-like-that shoes,
Wipe-them-on-the-mat shoes,
O that's the sort they'll buy.
The stories (Little Red Riding Hood, Goldilocks, The Three Little Pigs, etc.) are mostly wonderful, but Oxenbury doesn't clean them up: two of the little pigs die, as do most of the animals in "Henny Penny." This bothered me more than it did Eleanor.

On the subject of rhyme, we are in love with a weird little book (out of print? Natch.) called Pass the Celery, Ellery! 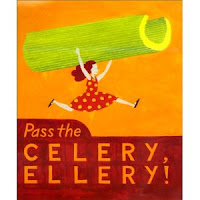 It's a rhyming alphabet book, with quirky painted illustrations of small people and large food on each page, captioned with polite requests: "Pass the abalone, Tony." "Pass the linguini, Teeny." "Pass the ratatouille, Louis." "Pass the water, daughter." As you might imagine, it's insanely catchy, and led to Eleanor trying to rhyme everything she could, all the time. Worth looking for.