One can see all of parenthood as a struggle between the values of a family (the real Max and Ruby, or Alice in Wonderland, or healthy food, or hundreds of other things and beliefs we hold dear) and mass-produced products which tend to undercut those values.  As adults, we've learned to screen out a certain amount of the crap (not all of it, god knows), but seeing the pull it has on our children is disturbing.  Bob and I tried to stem some of that tide by putting the TV away permanently, which we were happy to have done.  But no one outside of extremely closed communities can raise kids without the tensions of our culture.  I tend to believe that when people are as involved parents as you and Jeff are, family culture wins.  So maybe Eleanor will have memories you wish she didn't of Little Bear.  But both your girls will grow up to be adults who read Ruby out loud with a faint Chicago accent, and who will care about reading good books all their lives. 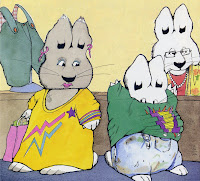 Good old Max and Ruby.  In among all those paperbacks, though, there are some very good non-TV-spinoff Max and Ruby picture books, most of them written in the '90s.  Our favorite was Max's Dragon Shirt, the tale of brother and sister getting separated from each other in a department store.  "Dragon shirt!" says Max, but Ruby is on a mission to replace Max's old blue pants. Ruby gets distracted by dresses she decides to try on (check out the purple one with cucumbers -- eggplants? -- on the skirt).  Max follows the wrong yellow dress and finds a dragon shirt, but instead of Ruby -- a teenager! (see illustration to right)  He screams, various confusions ensue, and when Ruby finally finds Max, he's eating ice cream with two policemen and the teenager.  Needless to say, Max goes home in his old pants and the dragon shirt.

In Bunny Party, the ever-officious Ruby is organizing Grandma's birthday party.  She brings seven guests: her dolls and stuffed animals, with names like the Tooth Fairy, Rapunzel, and Mr. and Mrs. Quack.  Max manages to sneak in three of his toys one by one (my favorite is Can't-Sit-Up-Slug), and every time Ruby counts the guests, she's one chair short and confused.  "Something's wrong, Max," says Ruby, "It must be a bad counting day."  Ruby finally discovers the uninvited guests, but before she can eject them, Grandma shows up and saves the day.

And then, four years ago, just as I was thinking Wells' works were on the downhill slide, Max's ABC arrived. I keep this one shelved with the storybooks, not the ABC books, because it's a delightful story about Max's ants:

Up Max's pants they climbed.
Bite Bite Bite went the ants
on the Birthday cake.

Max poured his Cup of Cranberry
juice onto the ants in his pants.

Down Down Down went the juice.
Delicious! The ants Drank it up.

Ruby tries various schemes to catch the ants, with Max participating, although his body language is skeptical.  In the end, Max rescues the ants from the vacuum cleaner and puts them back to bed in their ant farm, where they sleep, ZZZZZ.

Which I should do as well.  Sleep.

Deborah
Posted by Deborah at 12:02 AM

Email ThisBlogThis!Share to TwitterShare to FacebookShare to Pinterest
Labels: Wells