Max, Ruby, and how to deal with terrible adaptations

You raise a complicated question, in this era of adaptations and TV spinoffs and You Tube clips. When should we allow our kids to watch a movie adaptation before reading a book, especially if the book is something they're not quite ready for? We try to be purists where we can (or, more accurately, where we feel it would be blasphemous for Eleanor to get a sub-par impression of a character first), but it's not that simple.

So: we read the abridged Wizard of Oz just before watching the movie, and had good conversations about the differences between the two. When Eleanor discovered the Disney Peter Pan book at our local coffee shop, and then was given the movie by her grandparents, we followed it up quickly with a good abridged version as well. But when she followed the same path to the Disney Alice in Wonderland, which is a bizarre movie and bears little resemblance to the book, we let it stand. She's too young for the full-length Alice, and when she gets old enough, I think she'll enjoy it just as much even with the movie for background.

The more insidious adaptations for us at the moment are kids' TV shows. I've mentioned previously that the Little Bear books are better than the TV series; the same goes double for the adaptation of Rosemary Wells's Max books into the TV show "Max and Ruby" and all of its associated products, including books.

The original Max board books are perfect. Each, in ten pages, chronicles a small tussle between Max and his older sister Ruby: Ruby wants Max to eat his egg for breakfast (Max's Breakfast); Ruby gives Max a lobster toy for his birthday, and he's scared of it (Max's Birthday) ; Max is in love with Ruby's doll Emily, and wants to play with her (Max's Toys). Ruby is a big sister trying to exert control, and Max wants to do things his own way, and they are very, very funny. I can't do justice to quite how funny they are without a scanner; when our new one comes, I'll add to this post the image of Max wrapped up in Ruby's stuffed snake after he can't find his red rubber elephant to sleep with in Max's Bedtime.  (As promised.) 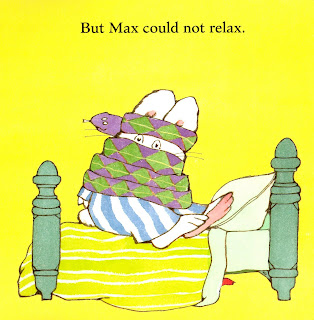 There were originally eight Max board books; as far as I can tell, four of them are now out of print: Max's First Word (Ruby tries to get Max to say a word other than "Bang"); Max's Bath; Max's Ride (a great concept book, as Max goes over, under, etc.); and Max's New Suit (Ruby tries to make Max wear his new suit for her party).

I'm taking the time to list them all here, because it's practically impossible to find them by doing a search in the mess of dreadful TV-related "Max and Ruby" books. Ruby, in the TV show and the spinoff books, sounds like somebody's whiny grandma, nagging her way through every lengthy story. (In our house, by contrast, Jeff reads Ruby with a faint Chicago accent -- a nice flat "A." Works perfectly.) The other problem with the series is that, when you enlarge the focus from just Max and Ruby, their lack of parents becomes conspicuous. In the board books, they're the only characters, but it doesn't seem odd: every pair of siblings has some alone time. In the TV show, they apparently live alone in a gigantic house with bizarre computer-generated wallpaper (sombreros in the kitchen). Grandma is in a house nearby, and there are neighbors and friends, but parents just aren't mentioned. This is weird.

Of course, Eleanor loves the show. I've done my best to discourage her from watching it, which has worked somewhat, but her pure experience of Max and Ruby as I knew them from my brother's childhood and before we discovered the TV show has been sullied. I'm sure it won't be the last time.