Ah, Hippos Go Berserk. A big favorite in our house -- one of the first books we gave Eleanor, I think. One of the many wonderful things about that book is the center spread, which I can't resist posting here:

It took me many readings before I realized that all is a bit of an exaggeration.

Hippos got a second life when Lizzie picked it up as she was learning to read. This was the first book she ever read on her own. Mona also went back to the board books when she wanted to learn. For her, it was a now out-of-print series of tiny books by Helen Oxenbury called Baby Beginner Books, with one word per page. There were four of them, but the one I remember best was

I Touch. It makes sense that many board books can become early readers: very few words per page, simple, big type, cozily familiar. 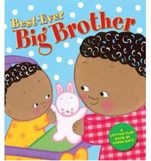 I'm going to do a bit of a leap here, to something I discovered on the store shelves today. I was straightening up the new sibling shelf, and found myself sorting through several copies of
Best-Ever Big Brother. It's a nice little lift-the-flap, nothing outstandingly imaginative, but utilitarian: "I'm a big brother. My baby brother has to wear a diaper/But I can wear big-kid underpants," etc. It's more-or-less the usual mix of multi-cultural: one spread with black siblings, two with Asians, three with whites. The exception, of course, is the cover: one is much less likely to find a book containing a variety of races with an African-American cover.

Best-Ever Big Sister has a child on the cover who could be interpreted as non-white. I've always liked these books, and they sell at about the same rate as other sibling books for the same age. 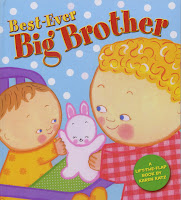 The bar code number is the same. It's just that this is what turned up when I re-ordered. No one at the publisher, Penguin Books, told me this was happening -- it just happened. My cynical self suspects that the publisher thinks it will sell more with the blue-eyed blond. Sometimes -- not often, but on occasion -- white customers will say that they're rejecting a book for a young child because the children pictured aren't white. They phrase it as "I want to give the child images that look like him/her." I find this a disturbing thing, and different from buyers who are looking for books with characters who resemble non-white children they are buying the books for. There's a much wider variety of races in books than in previous decades, but there are still a lot more books with white kids in them, or with white kids as the majority of kids. It seems reasonable to want to get more non-white images in the hands of non-white kids because there are already so many white images around. And it seems like a good idea to give everyone pictures of the world that reflect the variety of people in it.

So am I sounding like someone from a previous generation? Do you think about race when looking for books for your kids? Or is there enough variety around that you don't feel a need to be conscious of looking for it? This is a question for you, Annie, but also for any of those other parents of little ones out there.

Deborah
Posted by Deborah at 9:57 PM