It's been an intense and happy holiday season, filled on our end with lots and lots of good reading. As it's been a while, here's a quick snapshot of the reader profiles at my house these days:

Eleanor, in 3rd grade, tries very hard to read at every waking moment: at the breakfast table, brushing teeth, on the street walking home from the library. We've outlawed reading at dinner, but allow it during dessert; consequently, it can now take up to 25 minutes for her to eat a single cookie.

Her tastes run to big novels about mythology and magic: she's read and reread all of Rick Riordan, from Percy Jackson through his Egyptian series and the new foray into Norse mythology. For lighter fare, there are the Dork Diaries books (not my favorites, as you know), and lots and lots of Geronimo and Thea Stilton, the strange, translated-from-the-Italian series about talking mice with long hair and clothes.

Isabel, in 1st grade, has become a full-fledged independent reader in the last several months. She went from early reader books leapfrogging up to the Critter Club series (early chapter books focusing on girls who love animals -- a clear fit), and just this past month I looked over and she was reading Ruth Chew -- real, full-on chapter books, with hardly any pictures -- and telling us all about the stories. I remember loving Ruth Chew as a kid. The Matter-of-Fact Magic books are set in 1970s Brooklyn, actually not far from where we live now; in each, children encounter small, imaginative bits of magic that change their lives a little bit, but aren't scary or terribly permanent. The fate of the world is never at stake, and practical details pop up regularly: what do you do when you use a wizard's magic umbrella to transform your clothes into bathing suits, then lose the power to change them back, and no longer have the front-door key to your house? (The Trouble With Magic.)

Will, closing in on age 3, picks up books almost as often as his sisters. He's currently obsessed with superheroes and Yoda, so we're reading aloud a lot of I Can Read! books from the library with titles like Batman: Winter Wasteland. He is building up a baseline of specific character knowledge that I'm sure will come in handy later. Meanwhile, we all know much more about the specific powers of a wide variety of superheroes, in both the DC and Marvel universes.

Despite their different interests and ages, graphic novels remain a major go-to for all three kids, a kind of common denominator. When one picks out a new graphic novel of any kind, from Avatar: the Last Airbender to My Little Pony, they all vie for a turn to read it.

We stumbled across our newest favorite graphic novel series at the library, and the girls kept the first three books in such solid rotation that it was clear we needed to own them.

Princeless is centered around the adventures of Princess Adrienne Ashe, who begins the series at age 16 having been trapped in a tower -- like her 5 older sisters before her -- by her parents, in the hope that a dashing prince will come to save her. Unlike her sisters, Adrienne makes friends with the dragon guarding her, puts on the armor of one of the hapless princes who's been eaten by that dragon, and busts out of her own tower. Her goal? To save herself, and then to head out and save her sisters.

There is so much to like here. First, Adrienne and the entire royal family (King Ashe, Queen Ashe, 7 princesses and one prince) are black. This is obvious from the illustrations, of course, but it's also front and center in the text: the first three pages of the first issue show Queen Ashe reading Adrienne a prince-saves-the-blonde-princess-in-a-tower story, and Adrienne angrily critiquing it while her mother struggles to comb her hair.

Adrienne is confident, strong, and smart, not to mention physically capable -- she teaches herself swordfighting, and almost immediately does pretty decently in combat with her father's soldiers (they think she's a knight who has killed the Princess Adrienne). She's not invincible -- there's a good amount of slapstick with Adrienne falling from balconies and being tangled in her ill-fitting armor -- but she's resilient.

Almost all of the supporting characters in the series are female. In book 1 (Save Yourself), Adrienne meets and befriends Bedelia, the teenage daughter of a dwarf blacksmith who, it turns out, has been doing all the smithing for years while her father goes to the bar. Book 2 (Get Over Yourself) brings in Adrienne's sister Angelica, the most beautiful of the princesses, who has positioned herself as the muse for a town full of artists. In Book 3 (The Pirate Princess), Adrienne and Bedelia rescue, fight, and team up with Raven Xingtao, the daughter of a pirate king. (Raven is getting her own spin-off series this month.) Book 4 (Be Yourself) focuses on the quest to save Adrienne's sister Angoisse, who is shut up in a dark swamp castle with a gorgeous but creepy vampire boyfriend. There are also Kira, a werewolf being groomed to take over her father's position of wolf pack leader; Delores Grunkmore, a dauntless goblin guide; Queen Ashe, who disappears mysteriously partway through the series (Eleanor and Isabel and I have a theory about that); and of course Sparky, Adrienne's dragon.

Contrast this with the lineup in the (otherwise wonderful) Zita the Spacegirl, in which the rag-tag bunch of creatures and robots Zita gathers on her journey are entirely male, in classic Wizard of Oz fashion.

Characters throughout the series are diverse, both racially (so nice to see such a variety of skin colors in a comic book) and in ways that play with stereotypes. I say "play with" rather than "defy" because author Jeremy Whitley's tone is often knowing -- he's consciously poking fun at and retooling narratives we've seen before, sometimes in ways that feel a little heavy-handed to me, if not to my kids. I think of Adrienne's twin brother, Devin: a sensitive guy, an artist and designer, written in direct opposition to the hyper-masculine King Ashe, who so far has no redeeming qualities.

But I felt that way about the stereotypical aspects of both Princess Angelica (the beautiful one) and Princess Angoisse (the goth one) too, and Whitley managed to find endings which allowed each princess to find her own way of being empowered. I'm willing to reserve judgment as the series goes on.

And some of the wink-wink-nudge-nudge moments are Whitley's funniest. When Adrienne first meets Bedelia in Book 1 and expresses an interest in getting some armor that fits her, Bedelia ushers her into the "Women Warriors Collection": 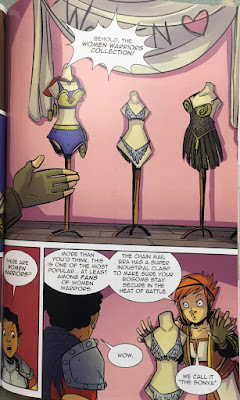 That would be, from left to right, the costumes worn by Wonder Woman, Red Sonja, and Xena, Warrior Princess. Adrienne and Bedelia's commentary: 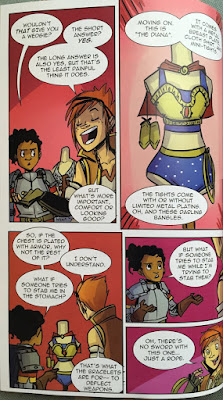 [Side note: I mentioned Will's current superhero obsession, which, among other things, is bringing home to us just how sexy and sexist the depiction of female superheroes is. Here's what happens when your son asks you to google pictures of Poison Ivy -- and this is with Safe Search on! We have a lot of conversations about how Wonder Woman must be really cold.]

After walking us through the implications: 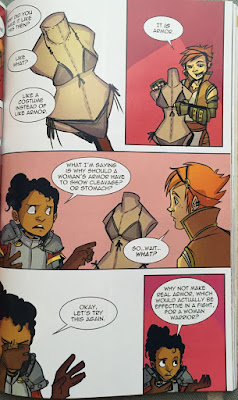 Adrienne requests that Bedelia make her some real armor. Which she does: 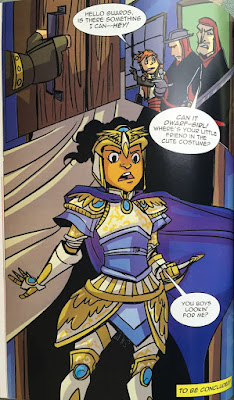 In my googling, I found a nice interview with Whitley about his inspirations for the Princeless series. He's white, but his wife and daughter are black, and he saw a huge gap in the kinds of comic books he'd be comfortable giving her to read:

"Good heroines are few and far between. When you look for ones that are leading books, it narrows the scope more. When you look for one that is appropriate for kids, it gets much narrower. When you talk about one with a lead female of color, the number drops to nearly zero (they exist, they are just very difficult to find). My daughter is black and while I encourage her to look for role models of all colors, girls need to be able to see girls that are like themselves in media. They need it even more when it comes to seeing them portrayed with strength."

Here's hoping these books keep selling like hotcakes. We'll certainly be buying them.

P.S. What did you think of yesterday's Newbery and Caldecott winners? I was thrilled to see Roller Girl named a Newbery Honor Book!