First, an invitation to our readers:

Readers! We want to answer your book queries! We are always happy to hear from you, and eager to respond to questions. This month, we are offering a special invitation: put us to work! Is there a void in your reading-with-children life? A type of book you've been looking for, but don't know where to start? Are you starting to think about birthday or holiday gifts for the children close to you? Comment on this blog post and/or email us at annieandaunt[at]gmail[dot]com. We look forward to your ideas!

I was prompted to put out this invitation, Aunt Debbie, by your most excellent response to my friend Eunice's question about audio books for a western road trip, a post which made me want to plan our own long driving trip right now. But as the school year has just begun, and we're still settling into our new house, we'll have to make do with listening in the living room, where our books are still packed away in boxes, awaiting the arrival of new bookshelves.

Isabel's 5th birthday brought a nice little influx of books into the house. There was the fabulous birthday box from you, containing several books I'll write about soon. My brother Michael and sister-in-law Grace gave us four more Olympians graphic novels, which meant we could finally return most of them to the library -- the girls have continued to reread them nonstop since early August. And our wonderful friend and frequent guest blogger Holly came through with a well-curated selection of graphic novels.

As you know from Holly's posts about dragon-themed picture books and dragon-themed chapter books, her son Ian is in love with dragons. It makes sense, then, that Holly would find us the brand-new graphic novel Dragon Girl: The Secret Valley, by Jeff Weigel. It's pretty fantastic.

Dragon Girl is set in a vaguely medieval time, with knights and blacksmiths and dragons who are sometimes spotted roaming the countryside. 11-year-old Alanna and her older brother Hamel are orphans, taking care of themselves since the recent death of their father. Alanna discovers a cave filled with dragon eggs abandoned when their mother was killed by a knight, and takes on the responsibility of caring for the hatching baby dragons. To prevent the dragons from getting acclimated to human contact, which would endanger their lives in the future, Alanna makes herself a dragon costume to wear when she comes to bring the babies food and play with them. There are some very funny scenes of Alanna dancing and singing with the babies -- apparently, dragons like to party.

Of course, complications ensue: One baby dragon hatches at a moment when Alanna's mask is off, imprints on her immediately, and follows her home. 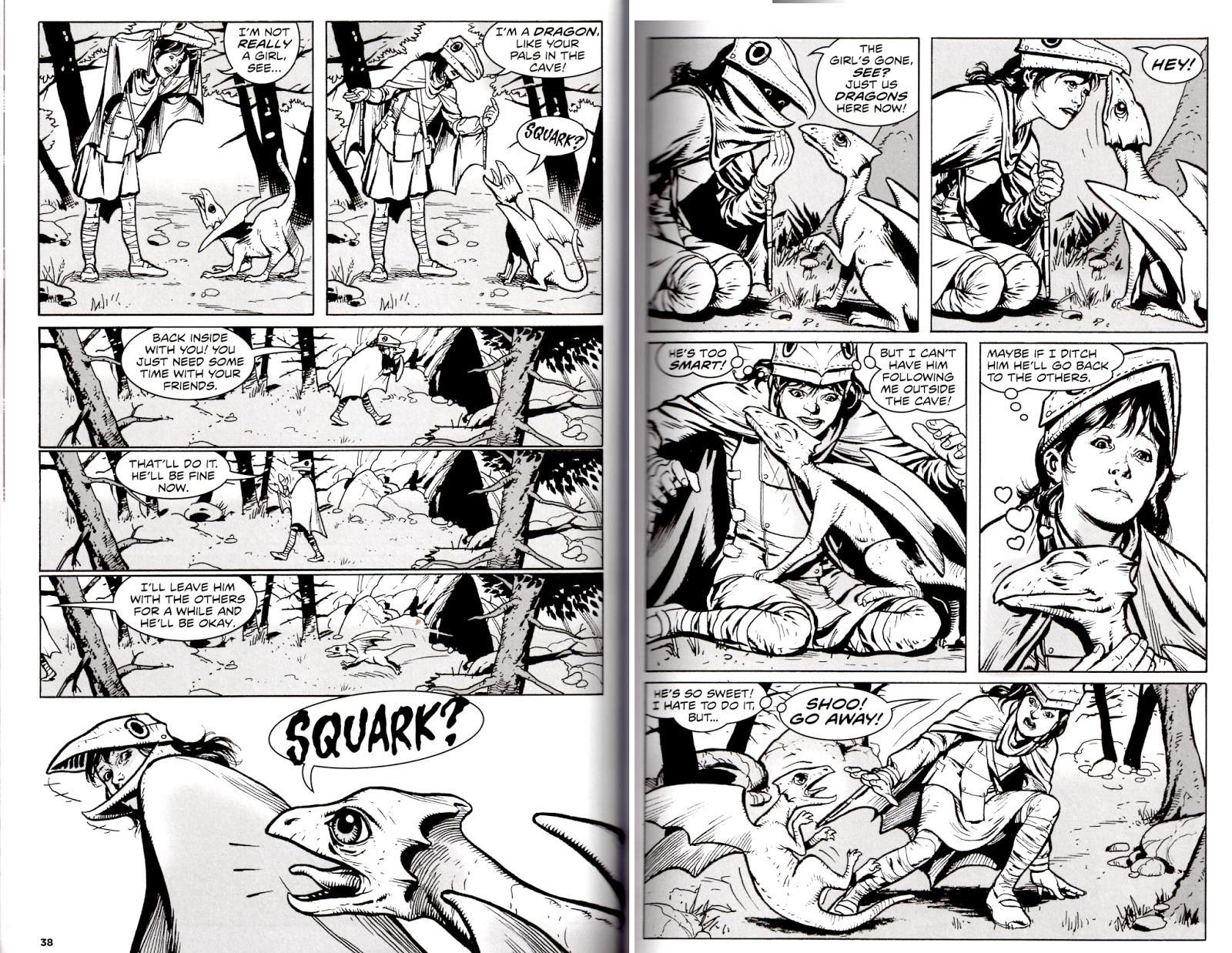 Meanwhile, the dragon-killing knight Sir Cedric is on the prowl, and there's a mysterious flying craft shooting from the sky, piloted by a masked figure. The story culminates in a hidden valley full of dragons, where Sir Cedric's greed and violent nature are set up against the intelligence and curiosity of the dragon-researcher Margolyn. 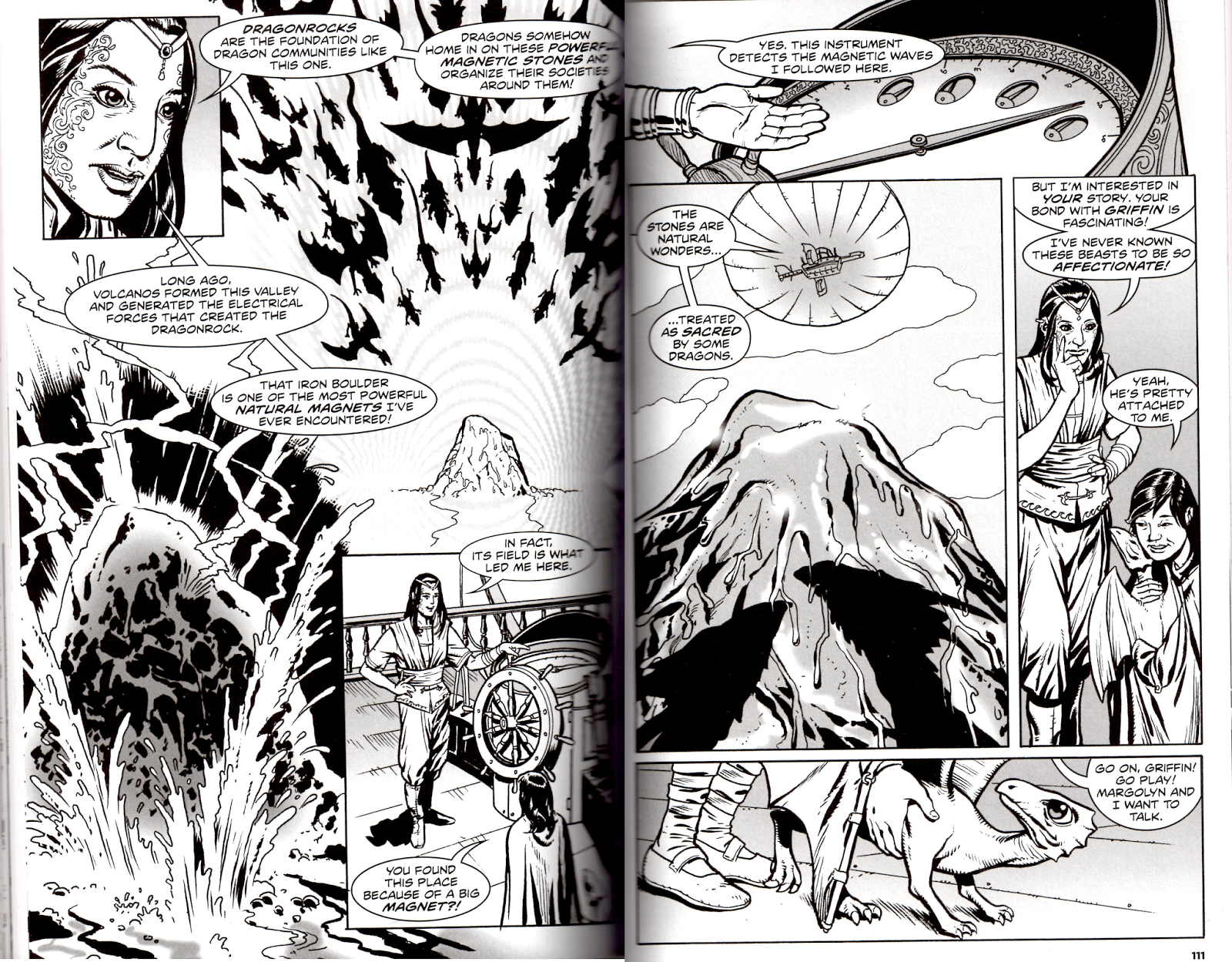 Alanna is a terrific character: smart, brave, kind, and stubborn in her belief in doing right. Her sibling relationship with Hamel feels realistic, and Margolyn provides a strong adult female presence in the story. There's an environmental push to the narrative -- don't destroy the land in your pursuit of wealth; learn about other creatures rather than killing them blindly -- but it doesn't feel preachy. We were all happy to see the number 1 on the book's spine, and know that there are more Dragon Girl books coming.

Eleanor, meanwhile, has become a huge Percy Jackson fan. After reading The Lightning Thief in one day a couple of weeks ago, she has finished books two and three, and is lobbying me to enroll her in Camp Half Blood next summer (have I mentioned how much I love living in Brooklyn? Role-playing Greek god camp in Prospect Park!)

Camp Half Blood is, of course, the name of the camp in the Percy Jackson series where half-bloods (children of Greek gods and their mortal paramours) spend the summer training to use their powers wisely and prepare for the Olympian battles that might be coming their way. It's a safe haven for these kids, most of whom live in the normal human world during the school year. Once inside the boundaries of Camp Half Blood, young demigods are supposed to be protected from the monsters which are free to come after them in the outside world. Percy is particularly endangered, because he's the son of Poseidon, one of the "big three" gods (along with Zeus and Hades) who promised a while back not to father any more children. Percy's existence is proof that Poseidon broke his word.

You mentioned in a post a couple of years ago that you'd stopped reading The Lightning Thief after two chapters. I think it's worth another try -- I read it last week, and was pleasantly surprised by its intelligence. Yes, as you put it, it's "a very action-action series," full of cliffhangers and bursts of violence. But the violence is tempered with a sort of video game logic. It turns out that the math teacher who turned into a homicidal monster (and made you stop reading) is really a Fury, up from Hades to punish Percy because the gods believe he stole Zeus's lightning bolt. When Percy slashes at her with his magic sword/pen, she bursts into a shower of yellow powder. She's not killed, exactly: all the mythical monsters he defeats in the book are immortal. They can be cut down in the moment, but they're never really dead, and so Percy isn't ultimately a killer.

Riordan knows his mythology, and his books are full of sly references and smart jokes. In one of my favorite scenes, Annabeth, a daughter of Athena and the major female character in the series, explains to Percy how she knows that he's been kicked out of a series of schools:

"Diagnosed with dyslexia. Probably ADHD, too."

I tried to swallow my embarrassment. "What does that have to do with anything?"

"Taken together, it's almost a sure sign. The letters float off the page when you read, right? That's because your mind is hardwired for ancient Greek. And the ADHD -- you're impulsive, can't sit still in the classroom. That's your battlefield reflexes. In a real fight, they'd keep you alive. As for the attention problems, that's because you see too much Percy, not too little. Your senses are better than a regular mortal's. Of course the teachers want you medicated. Most of them are monsters. They don't want you seeing them for what they really are."

Okay, so there's some anti-teacher bias. (On the teacher appreciation side, Percy's Latin teacher, the wheelchair-bound Mr. Brunner, is awesome, and turns out to be the centaur Chiron in disguise -- his horse body folds up into a hidden box inside the wheelchair.) Still, I love the idea that kids with learning disabilities are secretly just wired for ancient Greek.

Greek god role play! Dragon costumes! I have the feeling we'll be reveling in fantastic creatures for months to come.