Jean said a few things about Casey that made me want to offer a few more possibilities.

She's not a fan of anything with princesses or those kind of stories (unless, perhaps, if the princess is wielding a sword).

Can't get past that sentence without offering a brand new book:
The Princess in Black by Shannon Hale and Dean Hale: the team that brought us Rapunzel's Revenge.  I have mixed feelings about the illustrations by LeUyen Pham -- a little too cute -- but it's a fun book.  Princess Magnolia is living a Clark Kent existence, serving tea and being prim and pink and proper, when her magic ring, well, rings -- and she makes a polite exit: 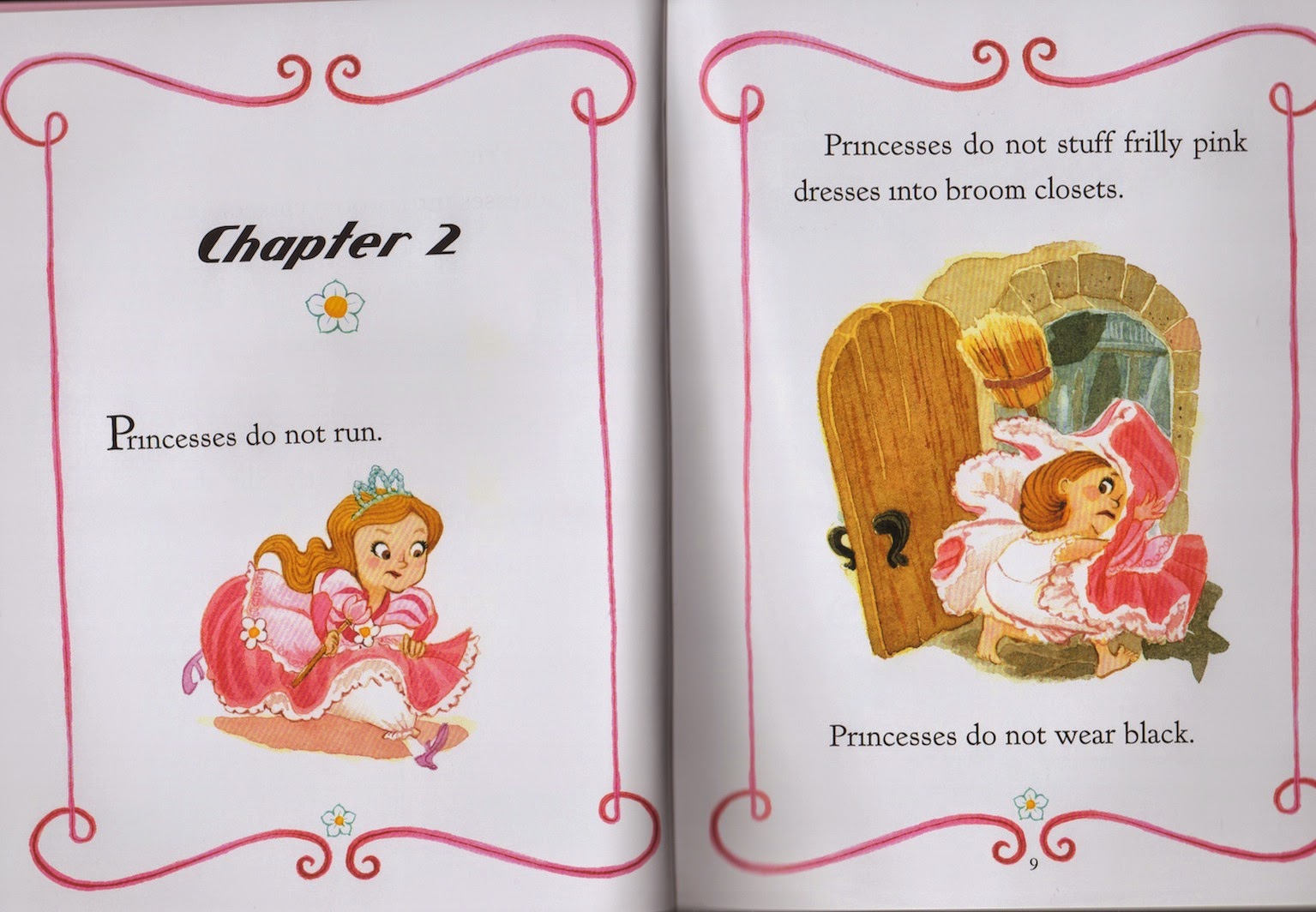 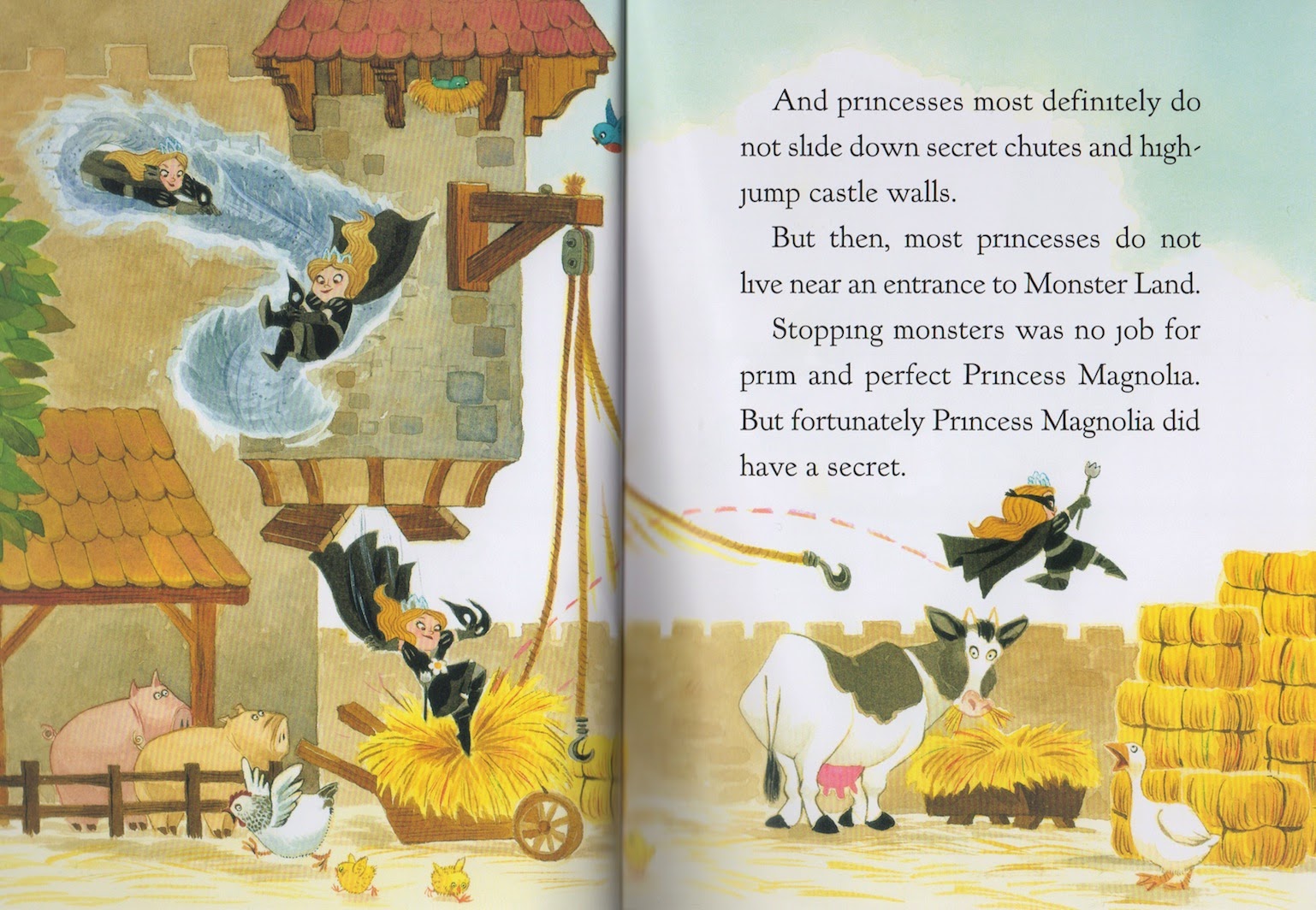 The secret of course is that she's the masked Princess in Black.  Her prancing unicorn Frimplepants gets the alarm from his magic horseshoe, sheds his horn and sparkly mane and tail and emerges as Blacky, the princess's faithful pony.  They race off to answer the call from Duff the goat boy whose flock is about to be eaten by a large blue monster: 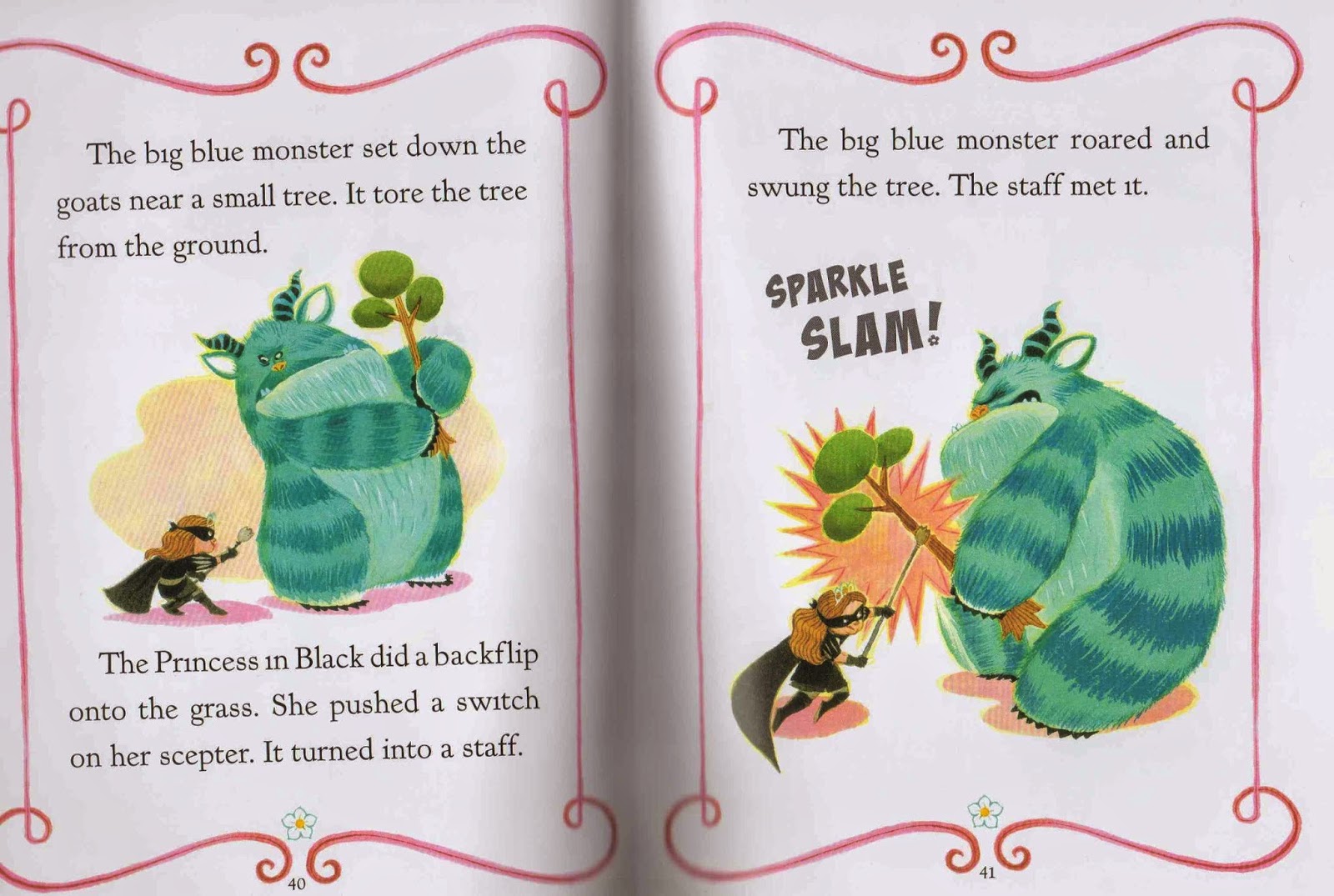 The battle continues for the next two pages with lots of sound effects.  The princess manages to keep her identity secret from all, although it's clear the goat boy is going to figure her out and become The Goat Avenger and her loyal sidekick.  The type is big and sparse, but the book is 89 pages.  Feels kind of Mercy Watson reading level.

Another book around that level is the energetic and definitely non-princessy Lulu and the Brontosaurus.  It feels like a chapter book, but the type is big, the page-turning is frequent.  And it's a riot.  You described it wonderfully here.

Jean says Casey likes a good battle, and that she'll read anything with cats.  Has their family discovered the Warriors series yet, by Erin Hunter?  The official site is, appropriately, at warriorcats.com.  They're chapter books that are definitely more advanced than Casey's Magic Tree House level -- but it seems to me they could be right up her alley.  The books are about cats who live in the wild and have created clans with codes of honor and warfare.  Some of their members are house cats who have escaped to the wild and joined them.  This is a  series in which the animals are definitely anthropomorphized, but they still act like cats, and have issues about surviving in the wilderness.  Right now there are five different six-book series which follow the clans and characters.  Whenever a new one comes out, a couple of kids will show up within a day or two looking for it -- a sure sign that it's a series with legs.

I just discovered from wikipedia tonight that Erin Hunter exists in name only.  The books are written by five different authors, including your pal Tui, who writes middle grade fantasy books which Eleanor has loved under her own name as well.

And coming back to your wonderful post, there's also a series of graphic novels based on the Warriors characters.  Here's a bit of Tigerstar & Sasha: Into the Woods: 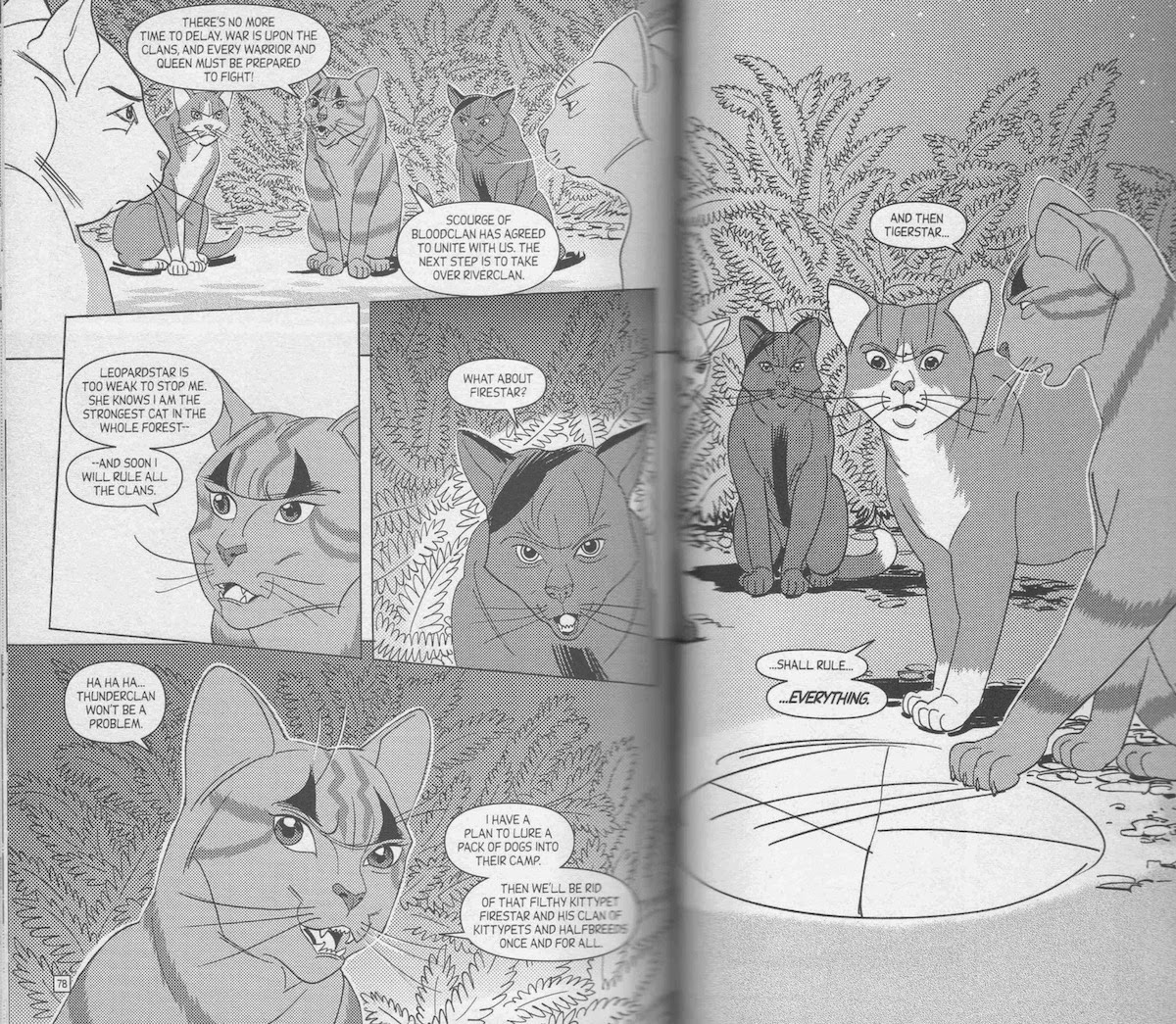 The books are better than the manga, but there's still the feel of the Warrior world.  Publishers are doing more graphic novels of longer books these days.  The goal is to hook kids on the easier-to-read comic books, then transition them to the longer ones.  Could this be a plan for Casey?