Animals and magic in the great early chapter books

Your breadth of book knowledge makes me so happy. Now I'm excited to read more of the books you recommended for 13-year-old Jack!

Today I'm responding to another reader request. Chloe, a friend from college and mother of Jackson, writes:

Jackson (nearly 5) has finally been showing interest in beginning chapter books -- we've been reading Winnie the Pooh (which he seems to tolerate) and at school they just finished Charlotte's Web (which he loved). What are the great early chapter books -- that have ZERO Ninja Turtles in them -- that we can read to him? He can't read yet on his own. He is that classic boy-kid who loves superheroes as much as he loves animals...ok, maybe superheroes a little more.

Chloe, you're at a fabulous point!

Our pages of book lists (over there on the right) are a good place to start. Check out Early chapter books and the sections on "Diaper bag books" and "Short chapter books" on the Learning to read books page.

Aunt Debbie has already pointed you to My Father's Dragon, by Ruth Stiles Gannett, and some thoughts on the transition to chapter books, with its possible pitfalls (the Stuart Little problem!).

Knowing the intense love of animals going on in your house, a few specific recommendations: 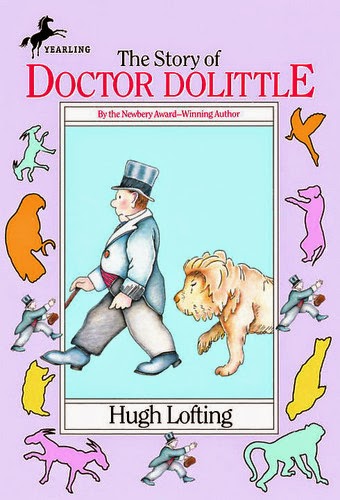 The Doctor Dolittle series, by Hugh Lofting. The veterinarian Doctor Dolittle can speak and understand animal languages -- not through any kind of magic, but because he pays attention, bonds with the animals, and is open to learning from his parrot, Polynesia. Some books are narrated by 9-year-old Tommy Stubbins, who becomes Doctor Dolittle's apprentice. Bonus: chapters are short, and the animal characters are all well-drawn.

Wind in the Willows, by Kenneth Grahame. The version we love is slightly abridged, but gorgeously illustrated by Inga Moore -- pictures on almost every page. Mole, Water Rat, Mr. Badger, and the indomitable Toad of Toad Hall are vivid companions.  Right now the girls and I are reading Inga Moore's version of The Secret Garden (first time for Isabel, a re-read for Eleanor). Moore's illustrations break open books that would otherwise be inaccessible to most 5-year-olds.

Let's throw in a little magic: 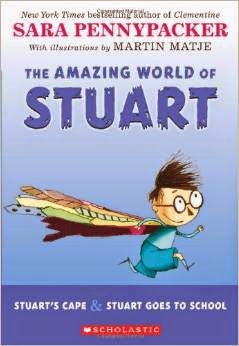 The Amazing World of Stuart, by Sara Pennypacker, was one of Isabel's favorite early chapter books last year. In it, 8-year-old Stuart makes himself a cape out of 100 ties, and suddenly gains superpowers. The catch: he has a different power each day, and doesn't know what it will be.

Half Magic, by Edward Eager. This has become one of my favorite gifts to give kids in the 5-7 age range. Four siblings find a magic coin, which grants wishes -- but, it turns out, only half of what they ask for, so they have to get creative. Eager's writing is totally engaging and terribly funny. If you and Jackson like this one, he has several more in the series.

Isabel's love of superheroes has found a natural extension in the Narnia books and D'Aulaire's Greek Myths and Norse Myths. (As you may have noticed, we're on a real mythology kick over here.) If you're up for some graphic novel action, I can't say enough good things about George O'Connor's Olympians series.

Then there's always Roald Dahl, who tosses in fine sprinklings of magic and makes for a gripping read-aloud, though the undercurrent of misanthropy always turns me off a little.

Finally, two more that don't fall into either the animal or superhero/magic categories, but which we've loved as entry-level chapter books for their depiction of kids:

Jamie and Angus, by Anne Fine, focuses on the relationship between a boy (Jamie) and his stuffed Highland bull (Angus). It is fine and tender, with a nice British flavor.

Anna Hibiscus, by Nigerian storyteller Atinuke, is also wonderfully warm, and provides a window into life in an African city. Lots to enjoy and discuss.

Do let us know if any of these are a hit with Jackson!