The perfection of Doctor Dolittle

I was so sorry to hear about the death of Bob's mom.  I hope you are all doing okay.  What a week for us to be discussing books about death!

Tonight I'm going to shift gears to bring up the newest obsession in our house, and an old, old favorite of mine: the Doctor Dolittle books, by Hugh Lofting.  My father read me the entire series when I was about 4 years old, and the books are among my earliest memories of being read to. While I retained the sense of loving them deeply, I had forgotten most of the stories -- unlike the Chronicles of Narnia, I never returned to Doctor Dolittle on my own as a reader.  I had a feeling that this would be the right time for Eleanor to hear them, and my parents gave her their wonderful old copies of four Doctor Dolittle books for her birthday a couple of weeks ago.  They are a perfect fit.  First thing in the morning and last thing before bed, Eleanor asks for chapters.  In less than a week, we've finished the  first book and are a third of the way into the second. 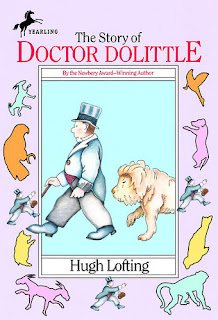 The first book, The Story of Doctor Dolittle, introduces John Dolittle, M.D., a doctor and naturalist who likes animals more than people.  With the help of Polynesia, a most excellent gray African parrot, he learns to speak a variety of animal languages, and becomes an animal doctor renowned throughout the world (that is, the world of animals).  He doesn't care about money, and his animals (Dab-Dab the duck, Chee-Chee the monkey, and Jip the dog, among others) band together to take care of him and his house, until he's called away to Africa to cure an epidemic among the monkeys.

The Voyages of Doctor Dolittle is narrated by Tommy Stubbins, a nine-year-old boy who becomes Doctor Dolittle's assistant.  It is a longer book, and probably the best of the series; in it, there are multiple voyages as well as mysteries closer to home, in the fictional Puddleby-on-the-Marsh.  All the animal characters are back, and the impression of the good doctor, a gentle, inquisitive man, is highlighted by Tommy's perceptions of him. 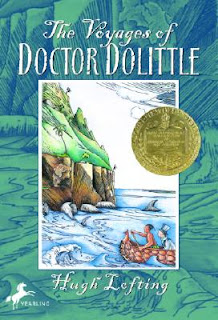 There is so much to love in Lofting's writing.  The language is clear but not simplistic; the descriptions of nature and animals are strong.  There is no magic involved in Doctor Dolittle, and then Tommy's, ability to understand animals: it's all about close observation and understanding that animals communicate in different ways.  The virtues extolled: curiosity, noticing things, patience and practice, caring for others no matter their species. There is warmth and humor and people named things like "Matthew Mugg, the Cat's-Meat man."  As a parent of a just-one-more-chapter kind of child, I was also happy to find that the chapters are super-short; it's never hard to find a place to stop when you have to get ready to go to school, or to brush teeth before bed.

The caveat to mention about The Story of Doctor Dolittle has to do with the depiction of the tribe Doctor Dolittle encounters in Africa, the Jolliginkis.  Descriptions of their king and his son, Prince Bumpo, in the original edition are problematically old-fashioned-racist in places.  When my father read me the original, he says he just changed the language as it needed to be changed, and left some parts out.  The copy I read to Eleanor, which I have linked to above, is a Bowdlerized version -- the African characters' roles have been cut down significantly, and all the racist parts are gone.  It worked for us this time through.  Such an odd problem to have with Lofting, when the moral of all the stories is about complete acceptance of difference -- only connect!

In all other respects, these are perfect books for a four-year-old.  We are very happy.

Email ThisBlogThis!Share to TwitterShare to FacebookShare to Pinterest
Labels: Lofting