Isabel has provided me with the perfect segue to two strange and wonderful and not necessarily young-child-friendly picture books by the excellent Neil Gaiman.  We seem to have written about him only once, in relation to Norse mythology.

Wolves in the Walls by Gaiman, illustrated by Dave McKean, starts with Lucy hearing things:

(Not a book to read at bedtime.)  Her family members dismiss her belief that there are wolves in the walls, but all three tell her, "You know what they say, if the wolves come out of the walls, then it's all over."  They finally do, in a burst of black line drawings, causing the family to flee:

(Lucy's father is a professional tuba player.)  The family huddles in the garden while the wolves party in the house.  Lucy is the only rational one of the bunch.  She sneaks back to rescue her pig-puppet, then concocts a plan for the family to return to the house and live in the walls.

That's the Queen's entire participation in the book: she's a cameo.  Lucy leads the family into the walls, then in an attack on the wolves:


"Arrgh!" howled the wolves.  "The people have come out of the walls!"
"And when the people come of the the walls," shouted the biggest, fattest wolf, flinging aside the tuba, "it's all over!"

The wolves all flee and the family eventually restores order. Then Lucy starts hearing new noises...  It's creepy and fascinating and wacky.

In the process of searching for already-scanned pictures from Wolves, I came upon a site called Teaching Children Philosophy which discusses "numerous philosophical issues concerning knowledge, metaphysics, and ethics" brought up by this off-beat book.  Kind of lovely, actually.

Six years before Wolves, Gaiman and McKean collaborated on
The Day I Swapped my Dad for Two Goldfish, which I sent to you as an un-birthday present for Eleanor. It's another odd one, but higher on the purely funny end of the spectrum.

A boy's friend comes to visit with two goldfish in a bowl.  They discuss a trade, but nothing offered by the narrator is acceptable.


I thought for a bit.

Some people have great ideas maybe once or twice in their life, and then they discover electricity or fire or outer space or something. I mean the kind of brilliant ideas that change the whole world. Some people never have them at all. I get them two or three times a week.

But the dad is bigger than the goldfish, so the swap is made.  When Mum comes home the kid sister rats on her brother, and both children are sent off with the goldfish to retrieve the dad.   Nathan, the goldfish boy, shows the narrator an electric guitar he has just acquired in a swap: 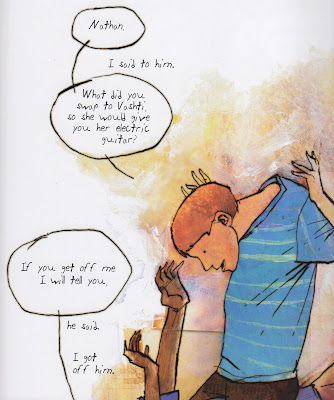 And of course Vashti got the dad in exchange for the guitar.  Brother and sister, bickering all the way, find that guitar girl swapped dad for a gorilla mask, and on it goes.  Finally the siblings bring a very large rabbit named Galveston to Patti's house, where the bunny is greeted with glee (including enthusiasm from the Queen of Melanesia, in another cameo).  The father is found reading his paper in the rabbit hutch and the children take him home, reading the paper all the way.

It's fun and nutty and, like Wolves,  much more visually sophisticated than your average kids' picture book.  I've never offered it to someone Eleanor's age -- I think of it as a bit older sense of humor.  But I'm curious what you guys think of it.