Escaping the stereotype (with difficulty)

The Sambo story, stripped of its unhappy heritage, is a good story.  The imagery stays with readers for a long time.  Every few years, some brave soul attempts a new version.  In 2003, the lush artist Christopher Bing illustrated Bannerman's words with an African child in an Indian setting:

The over-sized picture book even has tiger claw marks on the cover.  It keeps the title and the names, however, which are part of the problematic history of the story.  Sambo, Black Mumbo and Black Jumbo were names which became twisted into racist stereotypes.

Two major figures of children's literature of the last 40+ years, Julius Lester and Jerry Pinkney, both African-American, collaborated back in 1996 on a retelling which avoided the name question by calling all the people in the book Sam and their country Sam-sam-sa-mara.  So conversations go like this: "Sam looked at Sam. Sam shrugged. Sam shrugged back...."

Sam and the Tigers: A New Telling of Little Black Sambo creates some extra characters and broadens the humor.


Sam had an idea of what kind of a day it was going to be, and when he saw the next Tiger coming, he took off his shoes.  "Here you go," Sam said, holding out the shoes. 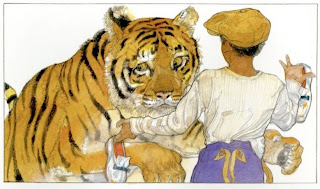 "Good deal for you. Bad deal for me.  I've got four feet.  You only got two shoes."
"Feet!" Sam exclaimed. "These are ear-shoes!"
The Tiger put them on.  "Ain't I fine!" he declared.
"You are indeed," Sam agreed.
The Tiger went on his way.
Sam didn't see any point in moving, and sure enough, along came another Tiger.

My experience as a bookseller is that this and Little Babaji are the versions most likely to appeal to customers, but even with the modern sensibility, a lot of folks are still uncomfortable.

I finally sent off a box of birthday books for Isabel (with some sisterly additions too) today.  One of them, a picture book by Neil Gaiman, is  something I'll write about next time.