An old story in a new form

I can't wait to check out some of those animal books with Isabel!  She's still very much an animal (mostly dog) girl.

We went to the library yesterday, and reading some of our loot this morning, I had a book epiphany -- a moment when I realized that the story I was reading was a new version of a story I knew quite well, but hadn't thought of in years, so dressed up that I never would have known from the cover that there was a connection. 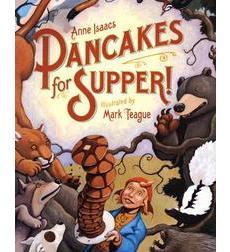 The book we were reading was Anne Isaacs's Pancakes for Supper!, illustrated by Mark Teague.  (I'm surprised to find it's out of print, as it's relatively recent; the link is to Alibris.)  Isaacs is the author of Swamp Angel, which you wrote about a while back, and its sequel Dust Devil; she has a great knack for tall tales and feisty heroines.  Teague is the illustrator of the How Do Dinosaurs series and the marvelous Poppleton books; his paintings are large, bright, and expressive.

Pancakes for Supper! tells the story of Toby, a girl riding on the back of her parents' wagon through snowy woods somewhere in the Northeast.  She's making up a song as she goes, about all of the special clothes she's wearing:

I've got a sky-blue coat with purple lining,
A sun-yellow sweater with green leaves twining,
Thick orange mittens with a matching cap,
Buck hide boots to keep out the damp,
Fuzzy red long johns and a dress of brown:
Brand-new clothes for Winter Creek town!

The wagon hits a bump, Toby goes flying way into the sky, and when she comes down, she's far from the wagon and right next to a hungry wolf.  After some rhyming dialogue, Toby convinces the wolf that she can make him into "the grandest animal in the forest" by giving him her beautiful blue coat.  He takes it and struts off.

After the wolf come a cougar, a skunk, a porcupine, and a bear, each of whom gets another piece of fine clothing, until Toby is left shivering in her red long johns.  She rounds a corner, looking for her parents, and finds all the animals fighting over who looks the best.

At this point, I'm starting to think, This seems familiar....  And then I turn the page and see the animals chasing each other in a circle around a big tree:

All their fine clothes fell off as they ran.  They caught hold of each other's tails and raced around the trunk of the huge maple tree.  Soon they were spinning so fast that Toby couldn't tell which animal was which.  Round and round the animals whirled, faster and faster, until at last they melted into a great golden puddle at the base of the trunk.

Because of course, Pancakes for Supper! is a retelling of Little Black Sambo.

Grandma and Grandpa (your parents) had a copy of Little Black Sambo on the kids' shelf in their apartment when I was growing up.  I remember having intensely mixed reactions to it: both loving the story and realizing at the time (probably due to my parents' intervention) that there was something uncomfortable and racist about the illustrations.  Jeff has a similar memory of the book: he remembers reading it, but knowing at the same time that it was in some way bad to like.

Helen Bannerman wrote the original story in 1899, when she was living in India with her husband, an officer in the medical service there.  Sambo is apparently supposed to be a caricature of a Tamil child, but in a number of later pirated versions of the book, he was depicted as African, or African-American, in illustrations which helped cement the image of the happy, none-too-smart pickaninny child.  Wikipedia has a good rundown of the controversy.  The original is very much in print, and online reviews seem to be split among grandparents who are thrilled to find it for their grandchildren and people who are appalled that its racist drawings are still available.

The story is pretty much the same one Isaacs uses: Little Black Sambo has fine new clothes, which he gives up to four tigers who want to eat him.  The tigers get jealous of each other and whirl themselves around a tree, eventually becoming a puddle of butter.  Sambo's mother makes the butter into pancakes, and Sambo eats 169 of them. (In Isaacs's version, the animals become maple syrup, which gets soaked up into the tree.  Toby taps it, her mom makes pancakes, and she also eats 169 of them.)

There's at least one other contemporary version out there: Fred Marcellino (of Pelican Chorus fame) changed the names of the characters from "Little Black Sambo, Mumbo, and Jumbo," to "Little Babaji, Mamaji, and Papaji," and kept the rest of the text the same in his book, The Story of Little Babaji.  I haven't seen it, but apparently it takes care of the racism question quite nicely.

I wish now I had the version I grew up reading and could assess it as an adult.  In the meantime, Anne Isaacs's book gives Isabel the animals she loves to look at, gives Eleanor a spunky heroine, and makes everybody white.  Progress?