Dolls past and present

I remember that edition of Hitty.   I remember that I read it, but not much else about it.  I carry it at the store, and occasionally a grandma will come in looking for it.  But it's not an old classic lots of people gravitate toward.  (Judy [mother of Annie, sister of me]: do you have any memories of it?)

The old and wonderful book I have that I remember receiving at too late an age is Sara Crewe or What Happened at Miss Minchin's: 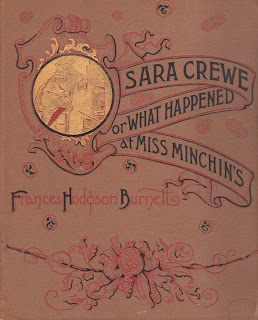 It's old and fragile.  The copyright page says 1888.  It's the novella that Frances Hodgson Burnett later turned into a play (1902) and then A Little Princess (1905).  I was 12 or 13 when British friends of my parents brought it to me; I felt far too old for such a child's book at the time, although I think I did appreciate the fact that I was being given an antique.  There are just a handful of full-page illustrations.
I came to appreciate A Little Princess as an adult, reading it with my own kids.

The doll book I remember loving as a child was Rumer Godden's
The Doll's House, about a group of dolls brought together in an old dollhouse.  They're all from different eras and made of different materials.  The salt-of-the-earth central character -- Tottie Plantaganet -- is an old simple wooden doll.  The evil manipulative character, named Marchpane, is a beautiful china doll. This book taught me the term celluloid doll, which was a kind of brittle early plastic (wikipedia tells me it's still used for ping pong balls).  Birdie, the celluloid doll in the Doll's House, is lovely and sweet and slightly ethereal.   Celluloid is highly flammable, and there's an awful climactic scene in which Birdie sacrifices herself in order to save a child doll from flames.   Your household can probably wait a few years before reading it, but the wonderfully varied characters and the situation stayed with me for a long time.

As long as we're on the subject of books about dolls, I'll throw in a lovely contemporary one:
The Doll People.  It's by Ann Martin, of Baby-Sitters Club fame, and Laura Godwin.  It's the first of a series of three.  Brian Selznick, the wonderful author and illustrator I was talking about a few posts back, did the many illustrations.  You have your basic 100 year-old dollhouse, inhabited by a family that has played with many generations of the same human family.  Suddenly, the Funcrafts move in next door.  They are (shudder) plastic, which dictates their more energetic, fearless personalities because they're unbreakable.  The adults are skeptical, but of course the daughters from both families become friends and solve a 45 year-old mystery together.  The story is gentle and the pictures are great: it makes a good younger read-aloud.  For several years I had a colleague at the store whose two sons loved this book, and I watched her persuade many families that despite the gender-aversion some boys go through, this is a great book for everyone.  It's full of adventure, and a good way to nudge the no-girls crowd back into a wider range of books.

And a last question for you on the subject of dolls.  Our family has always been fond of Eleanor's first major doll, whom she named after my second-born.  Has Mona Baby been passed to a new generation, or does Eleanor just occasionally let Isabel do stuff with her, as described in your last post?

Deborah
Posted by Deborah at 11:51 PM