My Father's Dragon: one of the greats 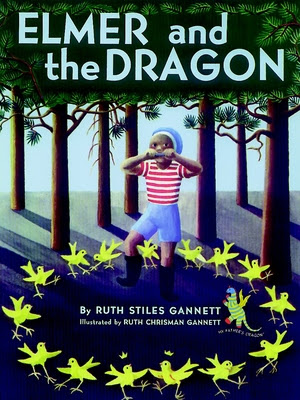 I realized, with Holly's lovely post on map books, that we haven't sung the praises of the My Father's Dragon trilogy enough.  They were our family's introduction to chapter books, and they're classics in that category.

Published in 1948, My Father's Dragon tells the story of a boy -- referred to throughout the book as "my father" -- who goes to a magic island to rescue a baby dragon who's being held prisoner there.  The boy packs his backpack with a variety of objects: rubber bands, lollipops, boots, a comb, brush and ribbons, chewing gum, an so on.  When he gets to the island he meets a succession of animals (each in a separate chapter) who want to stop him.  Despite the many threats aimed his way, the boy always reaches into the backpack and pulls out something with which to outsmart his opponents.


My father looked at those seven hungry tigers, and then he had an idea.  He quickly opened his knapsack and took out the chewing gum.  The cat had told him that tigers were especially fond of chewing gum, which was very scarce on the island.  So he threw them each a piece but they only growled, "As fond as we are of chewing gum, we're sure we'd like you even better!" and they moved so close that he could feel them breathing on his face.
"But this is very special chewing gum," said my father.  "If you keep on chewing it long enough it will turn green, and then if you plant it, it will grow more chewing gum, and the sooner you start chewing the sooner you'll have more."
The tigers said, "Why, you don't say!  Isn't that fine!" 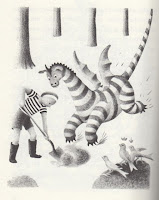 The boy sneaks past them as they watch each other's mouths for the color change.  This goes on through a lion, a rhino, crocodiles and more -- all disarmed by a different object in the pack.  The book ends with the boy and dragon flying away together.  In Elmer and the Dragon, we learn the boy's name. On the way back to Elmer's home, they are blown off-course and end up on Canary Island where various adventures ensue -- including digging for buried treasure.  Elmer and the dragon become fast friends.

The middle one is the weakest of the three, but as with many sequels, it's a pleasure to be spending time with beloved characters. The third, The Dragons of Blueland, expands to some wonderful new ones.  The dragon had left for his own home, but returns when he discovers his sizable family has been captured by bad guys who plan to sell them to zoos.  So Elmer goes off again to rescue the family.  In this book, we learn the dragon's name, and those of all his siblings.  Lizzie's beloved stuffed bear was re-christened when we read the list below.  Since about 1993, her bear (currently in summer storage at college) has been named Eustacia.  Here's the crowd: 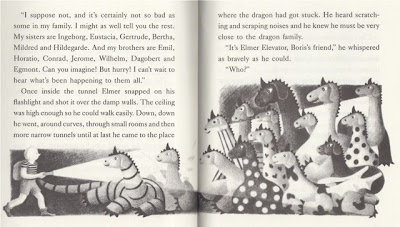 The books focus on the resourcefulness of Elmer acting without benefit of parents.  He has adventures and is brave and smart.  And he and the dragon have a lovely friendship based on helping each other.  A wonderful way to launch one's lifetime of novel reading.

Deborah
Posted by Deborah at 11:20 PM

Email ThisBlogThis!Share to TwitterShare to FacebookShare to Pinterest
Labels: Gannett