I'd forgotten about the larger questions of imperialism that come up in Mistress Masham's Repose -- I am really looking forward to rereading it with my girls in the next few years.

One of the other books that came to mind during our discussion of dolls, little people, and such, is the marvelous picture book Norman the Doorman, written and illustrated by Don Freeman.  It's the story of a mouse, Norman, who serves as doorman at the mousehole-sized entrance to a large human art museum.  He welcomes small groups of mouse visitors and takes them for a tour of the art at night, when the coast is clear.  Norman lives in the helmet of a suit of armor in a museum storage room, and Freeman's sketchy colored pencil drawings of Norman going in and out have a wonderful energy. 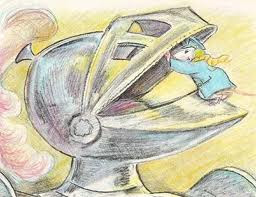 As a mouse, Norman is of course an unwanted resident in the museum, and there is a guard who tries repeatedly to catch him, mostly via mouse traps.  Norman gets very good at dismantling the traps and eating the cheese.  One day, the museum holds an art contest, and Norman is inspired to create a sculpture out of the mousetrap pieces he's been collecting.  Of course, he wins anonymously (wonderful illustrations of the snooty art collectors peering through monocles and down their noses at the art), and when the guard eventually does catch him, a moment of terror becomes a moment of realization and success.  It's a lovely book.

Of course, Don Freeman is far better known for Corduroy, the story of the little stuffed bear in the department store who goes searching at night for the lost button on his overalls.  That was the part of the story I remembered most clearly from childhood: Corduroy bending down to pull at the button sewn on to a mattress, as he is in the cover illustration.  But it's really about friendship, and finding a home. Lisa, the little girl who sees Corduroy's true self and buys him with her own money, takes him home, sews on a new button, and shows him the little bed she's made for him.  It ends:


"You must be a friend," said Corduroy.  "I've always wanted a friend."
"Me too!" said Lisa, and gave him a big hug.
The first time I read it aloud to Eleanor, I had to choke back tears.  The book has such a direct sweetness.

Eleanor and I took Corduroy out of the library a couple of years ago, and kept it and kept it; when we finally returned the book, Eleanor asked for it again, so many times that I had to buy it.  The first library copy we picked up happened to be the excellent 40th Anniversary Edition, a hardcover with all kinds of great extras in the back.

The last eight pages of the edition provide a glimpse into the creation of Corduroy: letters between Don Freeman and his editor, Annis Duff; an early manuscript of the book, with Duff's handwritten comments: 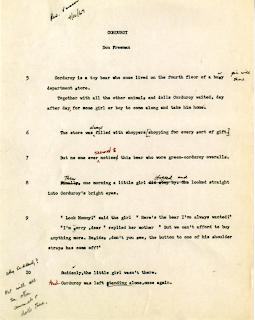 sketched drawings side by side with the finished ones: 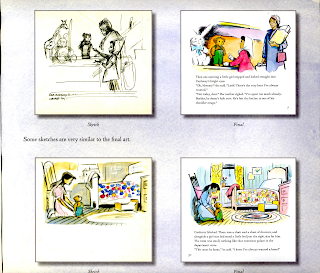 and copies of Freeman's obituary (he died of a heart attack at 69).  It's a fascinating read for anyone interested in children's books -- comparing Freeman's original text with the final version reinforces just how good you have to be to write a truly excellent children's book -- but it's also a joy for kids.  Why?  Because all the letters are in real envelopes. 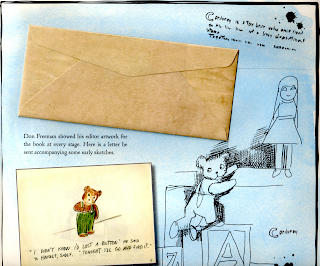 They're glued into the book, and they open, and the letters in them can be taken out and unfolded.  Seriously awesome.  It makes you appreciate Freeman's work on a whole new level, and get to play post office with your kids, all at the same time.