My parents are in the middle of a Great Purge and retooling of their apartment, spurred on by my brother, home briefly from his travels.  There have been great book-related results of this movement: first, the children's bookshelf containing all the books Michael and I grew up with has been moved to a far more accessible place in the living room, and all of the books are now visible, rather than hidden behind the couch.  Second, I have been made to take possession again of the 15 boxes which have been in my parents' storage room since I graduated from college.  While the prospect of dealing with all of the contents of the boxes is daunting, Eleanor's excitement over opening them has helped.  The first box we chose to open contained a number of my old dolls; the second was a book box.

Two old and much-loved books came out of this box, both, appropriately enough, containing dolls as major characters.

Hitty: Her First Hundred Years, by Rachel Field,  was first published in 1929, and the copy we have belonged to Grandma Helen, your mother.  There's her name, in bold ink on the first page: "H. Darling," and next to it a stamp with her married name and Pleasantville address.  Was this a book you and my mom read as children?  It appears to be a first edition, and I searched it up fully expecting it to be out of print, but lo and behold, it's a Newbery winner, and still very much available.

Hitty is a wooden doll, and she narrates the book, writing her memoirs from the comfort of an antique shop where she finds herself after cycling through the hands of a number of owners and going on an improbable number of adventures (a whaling ship, New York society, a hayloft with a litter of mice).  I remember most of the plot rather vaguely, but with some fondness.  Eleanor had me start reading it immediately, and while the language in the first chapter is a little stilted at times: "So here I am in the midst of her very untidy desk with my feet on a spattered square of green blotting paper, my back against a pewter inkstand, and a perfect snow bank of bills and papers heaped about me."  Lots of vocabulary words to touch on, there.  Hitty's narration is very matter-of-fact, and in that way quite appealing.  I'm not sure we'll get through it all now, but I look forward to trying again if this attempt falls flat.

A Little Princess, by Frances Hodgson Burnett, is another story.  I've written before about the tale of orphaned and cast down Sara Crewe, which captivated me even more than Burnett's most famous The Secret Garden. 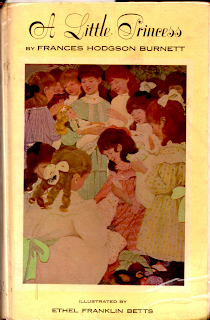 I adored this book as a child.  The edition I pulled from the box is a former library copy, water-damaged from a flood caused by our upstairs neighbors' waterbed when I was perhaps 10 years old.  That flood took out a number of books, but I was always secretly grateful to it, because it allowed me to keep the sumptuously illustrated version of a book I would otherwise have had to return.  The full-color plates throughout the edition were painted by Ethel Franklin Betts, and they have just the shade of mistiness to make them most romantic to a girl with that bent.  Eleanor seems to be having a similar reaction.  After a chapter of Hitty, she asked for a chapter of Sara Crewe, and the clearer, simpler language and detailed descriptions of dolls and dresses in the early pages have made it our current chapter book of choice.  I'm finding the separation between Sara and her father hard to handle, as I know the death that's coming, but Eleanor is taking it in stride.

So here's Sara Crewe, with her doll Emily, who she speaks to as if she is a real person, and Eleanor sitting on the couch with her new/my old doll in her arms, and Isabel putting Mona Baby (Eleanor's baby doll, named after your younger daughter) to bed, and Hitty's memoir sitting on our coffee table -- it feels kind of intimate, really.