I'm so happy the wombats were a hit.  I'm quite fond of both of those books.

Thinking about Book Expo America, where I was earlier this week, I realize I want to talk about one remarkable author and his new book, which has a lot of resonance with elements of your life.  Brian Selznick started his career as a bookseller, at Eeyore's Books for Children, a store to which your parents introduced me and where I suspect you spent a lot of time in your youth.

Selznick was one of the speakers at the Children's Book and Author Breakfast.  To the extent that the kids' book industry has superstars, he qualifies.  And he enhanced that image by appearing in a shiny gray suit and red shoes which practically glowed; he stepped out in front of the podium to show them off before speaking.  We all cheered.

He's been a quite wonderful illustrator and occasional author for decades, but his most amazing work came in 2007:
The Invention of Hugo Cabret. It's a story set in a Paris railroad station in the early 20th century and deals with, among other things, the history of silent film. About half the book is full-page drawings. The pictures aren't illustrations of the words; they pick up where the words leave off and continue the story in graphic form for pages, then cease and the author's words pick up the story from there.  It's quite wonderful.  Martin Scorcese, of all people, is making it into a 3-D movie this fall (trailer here).

The subject of Selznick's talk on Tuesday was his next book,Wonderstruck, even more heavily illustrated, but with a slightly different structure.  It's due out in September.  It tells alternating stories of two young people, one in 1977 and the other starting in 1927.  Rose, the girl from the earlier era, is deaf and her story is told completely in pictures.  The boy's story is in words.  I haven't read the whole thing yet, but  I watched two of my colleagues each read the entire book (we received advance copies) on the bus ride back from New York to DC.  They were riveted.

Here's part of Selznick's acknowledgments in the book, talking about a documentary called Through Deaf Eyes:


I was especially fascinated by a section about cinema and the new technology of sound, which was introduced into the movies in 1927.  Prior to this, both deaf and hearing populations could enjoy the cinema together.  Sound movies, for the first time, excluded the deaf.  That insight was the beginning of Rose's story.

So, resonance with your life: Eeyore's; history of film (your father's encyclopedic knowledge qualifies there); both of his parents, your grandparents, were deaf -- and you and your mom know ASL, don't you?  Oh, and I don't think I mentioned that Selznick, of course, lives in Brooklyn.  But let's add an element from the maternal side of your family: the Museum of Natural History, next to which my parents, your other grandparents, lived for much of your childhood.  I don't want to put in any spoilers, but Rose ends up on the lam in the museum of 1927: 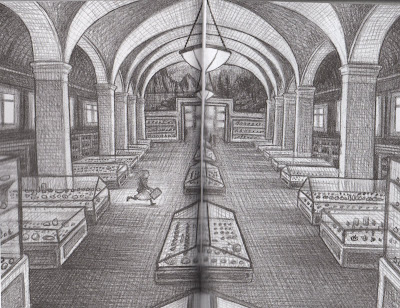 He meticulously researched the museum of that era -- as he researches all his historical works.

The most magical moment of Selznick's talk was a brief reading from the book.  He started with a dream sequence of being chased by wolves (they silently get closer and closer), then read an introductory section about Ben, the 1977 boy.  Then he showed the opening sequence of Rose's story: closeup of a movie magazine, the picture pulls out to the magazine in Rose's hand, Rose looking out the window of her room.  We see a car pull up, a man knocks, Rose climbs out of her window and down a tree, then runs to the river with a note in her hand that says "Help me."  He projected more than 20 double-page spreads of pictures on the screens in a big banquet hall at the Javits Convention Center.  I can't tell you how long it took -- maybe two minutes?  There was not a single sound in the hall: no coughs,  no cell phones, no clinks of coffee cups.  Everyone was completely absorbed in the pictures.  Full of wonder.

Deborah
Posted by Deborah at 10:42 PM

Email ThisBlogThis!Share to TwitterShare to FacebookShare to Pinterest
Labels: Selznick