We keep coming back to Trina Schart Hyman -- she's so good.  I want to put in a plug for another fairy tale she illustrated: Snow White.  It went out of print fairly recently, but I couldn't find a used copy for less than $39, and most are significantly more than that, alas.

She illustrates Snow White as a young teenager, which I like.  But the best part of her pictures is that the evil stepmother is really beautiful, not twisted and mean like the Disney version.  My scanner is still broken, so I can only show you the second-best picture, but you can still get my drift: 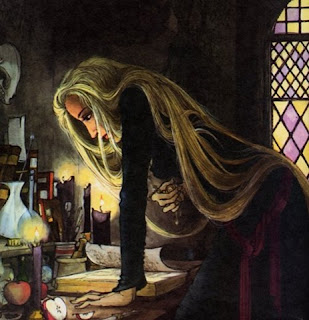 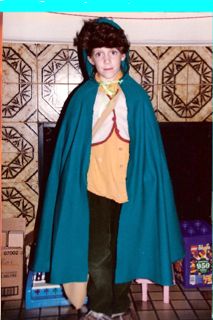 Well, capes based on books.  I've got a picture for that one too.  I've already told the story of Lizzie's 6 year-old hobbit birthday party for which I sewed 17 hobbit capes.  Here's Lizzie in her Bilbo Halloween costume (complete with wig) with the cape that became the prototype for the other 16.  I think it was a Simplicity pattern.  We used the wig again when she was John Lennon for Halloween in fifth grade.

And as long as I'm referring to past posts, I'd like to report that I read Jackaroo by Cynthia Voigt on my recent quick trip to New York -- all those hours on a bus were perfect for complete immersion.  Wonderful!  Gwyn is such a great character, and there are so many times in the book when Voigt creates many different levels of meaning and action.  How are the other books in Voigt's Kingdom series?  As good?