Welcome back!  I hope you're continuing the family tradition of Easter egg hunts this weekend.  Half the thrill of those hunts was the fear that some eggs wouldn't be found until months later.  We have loved The Country Bunny and the Little Gold Shoes in our household, too.  I don't have any memories of it in my own childhood.  Cousin Gail (soon to be a grandma) introduced it to my girls when they were quite little.  It sells very well every year -- I never order quite enough.  Almost everyone who buys it remembers it from long ago.  I've always felt it was the ultimate book in praise of the single mother.  I'd never thought about the anti-racist element: didn't get the brown bunny/white bunny thing.

Getting back to Peek-a-Boo! by the Ahlbergs, and the World War II theme.  My father, your Grandpa, was inexplicably irritated by the historical feel of that book.  I remember him reading it with our kids and asking why the hell they put it in the war era like that.  I don't know if it brought up memories (although  he spent most of the war in Ohio and Florida) or if it was part of his general glumness of those post-Grandma years.  Anyway, you ask why the baby's father gets into a uniform and appears to be leaving at bedtime: 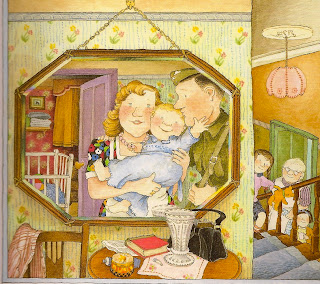 He sees the landing mirror
With its rainbow rim
And a mother with a baby
Just like him.
He sees the bedroom door
The crib made ready
His father kissing him goodnight
His ball
And his teddy.

Daddy, in my opinion, is a London Air Raid Warden.  They patrolled the streets at night, enforcing the blackout and helping during air attacks.  Dad's doing his part on the Home Front.

I'm so glad you found Chaos Walking as special as I did.  I love it when the last book in a trilogy is the best.  You know how some books can put your head completely into a character's mood?  One feels the tension, is immersed in the anger?  Monsters of Men has a scene of a surprise reunion between two characters which is one of pure joy -- I felt high on the happiness.

I'm tossing out a query here from guest blogger Emma who wrote about Ella Enchanted last November.  Our discussion of all that YA literature a few weeks back brought memories for her of a book whose title she can't remember.  But she sure retained a lot of the book:


Here's what I remember: it was definitely published before 2000. It's told in the first person by a white girl growing up in the south in the 1960s. Maybe it's Alabama? Anyway, it's the year she starts middle school, and also the year that her town becomes desegregated.  She's nervous about going to a new school, and this is compounded by the fact that her best friend won't be going to the newly desegregated public school--instead, Best Friend's parents are sending her to a private, all-white school. There's wonderful descriptive writing, including a scene where the smell of pizza wafts upstairs to the two girls having a sleepover, and a different scene where Main Character talks about beginning to see her parents as real people instead of as "cardboard cutouts." Mostly, I remember it speaking to the difficulties of outgrowing a friendship, and the ways in which you can feel both left behind and like you're doing all the leaving.

Major characters include: a wonderful 6th grade teacher who seats all her students alphabetically, regardless of race, and has her 6th graders read Huck Finn; a piano teacher who pushes the main character to challenge herself with more mature music selections; an older sister who is in high school and lends her little sis a bangle bracelet to make her feel better on her first day of school; and a black boy in the main character's class with whom she develops an unlikely and sometimes tense friendship.

Main plot events include: Best Friend calling the piano teacher "nigger" and getting slapped by the main character; an uncomfortable halloween party; the 6th grade class attempting to get over an obstacle course wall in under a certain amount of time; an end of year piano concert; the main character impressing classmates with her awesome layup shot; and I think there's an unfortunate haircut.

Any of this ring bells with you?

Alas, I have failed my wonderful Emma. I don't know it.  Anyone out there recognize this?

Deborah
Posted by Deborah at 11:15 PM