I hope that grading your students' portfolios is bringing you much pleasure, even as it consumes your time.  I really liked Cyd's guest blog entry.  I haven't looked closely enough at Close Your Eyes -- it's on my to-order list right now.

My week started with what is now for me a once-a-year ritual: Monday morning I was holed up in my bosses' house across the street from our store, with their home office computer playing the live webcast of  the American Library Association awards. Their teenage daughter's laptop was on the desk (thank you, Zoe), open to the ordering page of a national book wholesaler. As soon as a winner was announced for one of the four or five big awards, I'd enter it in the shopping cart and pray there was still available stock. The winners often sell out within minutes after the announcement. Every year there are one or two books from small publishers who had no idea they were about to hit the jackpot, and it takes two months for them to get another print run going. So if I don't get an order in immediately, it could be a while before I'll have those books in stock. The whole process is both nerve-wracking and fun; when I worked in television news, the adrenaline rushes were more or less daily, but in the book business, there are very few moments when one  has the opportunity to react well under pressure.

And, as in the news business, the excitement of it all tends to distract from the content. It's taking me a while to process some of the winners. Very little this year was predictable. The biggest surprise, for me, was the Newbery medal (for best children's literature), which went to
Moon over Manifest, by Clare Vanderpool.  She's a first-time author who wrote the book over the course of five years when her four children were growing up.  I hadn't read the book -- reviews describing the 12 year-old heroine as "plucky" and "scrappy" put me off a bit.  I'm about a third of the way through it now, haven't formed a coherent opinion yet -- will report more soon.  It's the story of a small town during the Depression.  There was no clear front-runner in this contest this year, but I was sad that two of my favorites, Countdown and A Tale Dark and Grimm were completely iced out.  They're still great books, I'll still be able to sell them, but these awards really do have a big influence on demand and publishers' allocation of resources.  It's funny, I have to disengage from the books I was rooting for before being able to appreciate the chosen few.

The other surprise was the Caldecott Medal, which went to
A Sick Day for Amos McGee, illustrated by Erin Stead. It's a lovely book, in many senses of the word. The text, written by the illustrator's husband Philip Stead, tells a sweet and quiet story of a zookeeper who tends his charges lovingly: 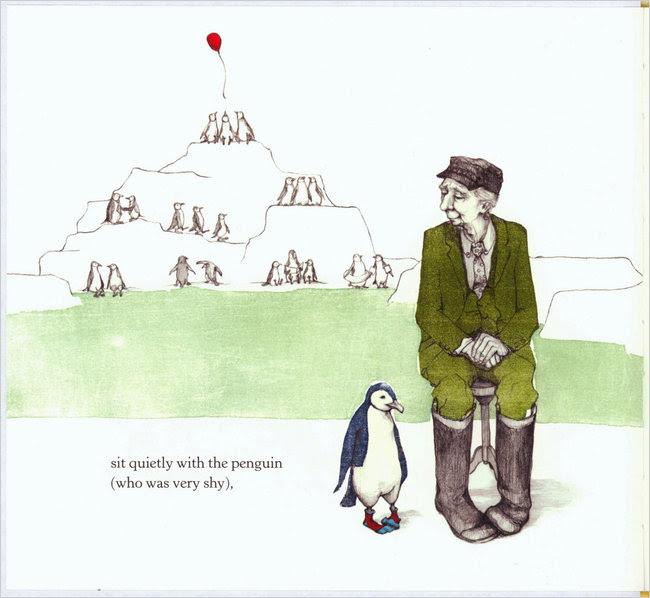 When he gets sick, some of them leave the zoo and go to his house to take care of him. The illustrations are wonderful: full of feeling, and with enough going on that you can keep discovering things in subsequent readings.  It's great and definitely merited the big award. 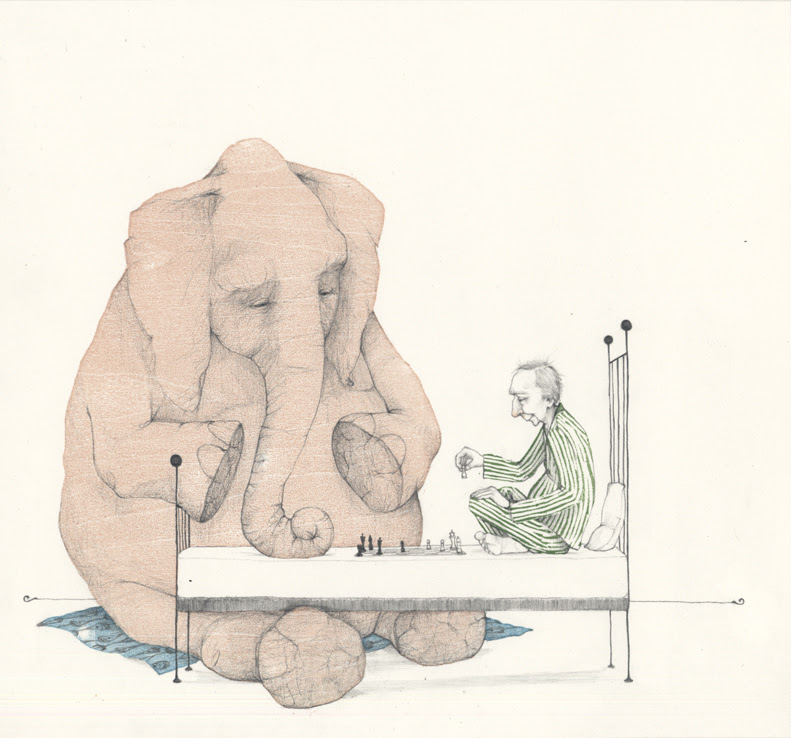 But with the Caldecott, there was also, so to speak, the elephant in the room: David Wiesner's
Art and Max. I've really enjoyed this book (see blog entry from back in October) and have had a lot of fun watching both kids and adults read it for the first time. All year it's been clear this is a very wonderful book.  But Wiesner is also the winner of three previous much-deserved Caldecott medals.  It's clear the award committee decided to look to other candidates -- Art and Max didn't even receive an Honor.  It's one of those questions one can debate at length: should a clear front-runner be passed by to make room for newer talent?  I don't have an answer on this one, and I think it's great that the Steads' book won, but something seems vaguely not-right in here somewhere.

In the meantime, I've got several more award-winning books to catch up on -- a task I'm looking forward to.

Deborah
Posted by Deborah at 12:58 AM