Somehow, the late Dick King-Smith seems worth a second entry.  In the process of writing about him last time, I came upon a list of all his books in wikipedia: about 150 of them.  Many are out of print -- some of them deservedly.  But some of them are definitely worth tracking down.

Heaven knows if it's readable, but Bernard the Magical Toilet Brush has to be one of the great book titles of all time.  I'd never heard of it until I saw the list.

For those looking for more King-Smith picture books, I only know of one other:
I Love Guinea Pigs. It looks a bit like All Pigs Are Beautiful, but the text, although full of reminisces about guinea pigs he has known, reads a bit more like information for pet owners. 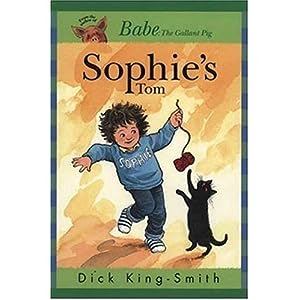 Those searching for shorter chapter books to read to younger kids should go to Alibris for the Sophie books -- all out of print.  He wrote six of them, starting when Sophie is four years old.  She's an opinionated little girl who intends to grow up to be a "lady farmer" -- the only part of the books that irritated me: I dropped the "lady" in the reading.  She acquires a new pet in each book, starting with Sophie's Snail and working her way up through kitten, puppy, rabbit, and pony.  In the last book she inherits a castle in Scotland from a distant relative.

Pretty Polly is a shorter chapter book in which a farmer's daughter teaches a chicken to speak.  It's been many years since I read it, but Wheaties (the cereal) figure in the motivation for speech.  The Cuckoo Child, also much reread in our household, is the story of a boy who finds a mysterious egg and gives it to his geese to hatch.  It becomes an ostrich.  Almost everything I know about ostriches I learned from this book, including that their kick is worse than their peck.  Both these books, like most of King-Smith's are very gently funny.

And finally, there's The Queen's Nose, which the BBC apparently turned into a TV serial for several years.  It's the story of a girl who receives a magic coin which, when rubbed on the side across from the queen's nose, grants a finite number of wishes.  In the British tradition, wishes can turn out literally true but not quite as intended.  I'd call this one older than the others above: maybe seven and up.  It has a nice ending about acting selflessly.

Even though a lot of these books are currently out of print, I want to believe that they'll come back again.  King-Smith had such a lovely touch -- one hopes many of these are not gone forever.

Deborah
Posted by Deborah at 9:14 PM