The Golden Rule via fairy tales

We will have to try again with some of King-Smith's books.  At your suggestion a few months ago, we took Three Terrible Trins out of the library.  I liked what I read of it, but Eleanor found it frightening -- in the first chapter, three mouse husbands of the trins' mother die at the hands of the cats, and Eleanor, who has not been fazed by much more intense moments of violence in other contexts, was really disturbed.  You never know.

A while ago, Gina asked in a comment for recommendations of picture books that might help teach her 4-year-old twins about compassion and helping others.  One place we've been going recently to have this discussion is into fairy tales.

It started with trying to think of another way to explain to Eleanor that she shouldn't grab toys away from Isabel, even if they were her toys.  I heard myself saying, for the millionth time, "How do you feel when someone grabs something away from you?" and then I thought of teaching her the Golden Rule.  It has a sparkling, toddler-friendly name, and it's incredibly helpful in a variety of sibling and playdate situations.  I've used the formal phrasing ("Do unto others as you would have them do unto you"), but have mostly paraphrased it as "Treat other people the way you would like to be treated."  Then we found, on separate library trips, two really weird and wonderful fairy tales that helped reinforce the message.  They are both out of print, so get ready for some Alibris links. 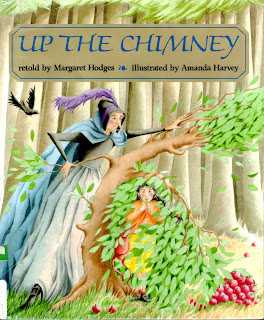 Up the Chimney, retold by Margaret Hodges and illustrated by Amanda Harvey, is a revisiting of an old English folktale.  A family with two daughters keeps all their money in a long-tailed bag, and when it's stolen, the girls decide to help out by going to seek their fortunes.  The eldest girl goes first.  She can't find any work in town, and on her way farther out into the country, things start talking to her.  She passes an oven with bread baking, and the loaves say, "Little girl, little girl, take us out.  We have been baking seven years, and no one has come to take us out."  She does.  Then it's a cow who needs to be milked (again, seven years, ow), and then a laden apple tree that needs help shaking down its apples.  She helps them both. 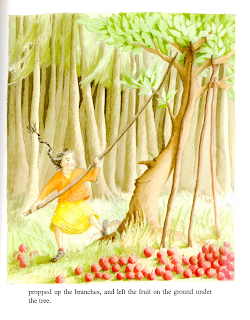 The girl finds a job as maid to a witch, who warns her not to look up the chimney.  When the girl does look up, her parents' stolen money bag falls down on her, and she runs off home with it.  The witch pursues her, but the tree and the cow and the oven and baker all help hide her, because -- Golden Rule Alert! -- she helped them first.  She gets home safe with the money.  The second sister decides she'll do the same, but she turns out to be selfish and won't help anyone who asks her, so when the witch comes looking for her, the tree points in her direction and the witch beats her with a broomstick and takes the money away.  Generosity and compassion are rewarded!  Selfishness is punished, but not with anything too horrific!

Eleanor loves this book.  I think part of the attraction for her is that the moral is clear and written at her level -- she talks it through and really gets it.  There's also some fun repeating poetry in the witch chase scenes:


Cow of mine, cow of mine,
Have you seen a girl
With a willy-willy wag, and a long-tailed bag,
Who's stole my money, all I had?

Finally, the illustrations are energetic and funny, all the characters leaping around with their arms up, and in modern dress.  The older sister has a long expressive braid, and the selfish younger sister wears a walkman and a pink feather boa. 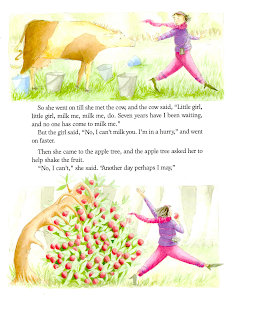 The second is a book by Robert San Souci, of Young Guinevere fame, based on a Russian tale: Peter and the Blue Witch Baby. In this tale, handsome young tsar Peter runs afoul of a witch.  When he goes off in search of his chosen bride, the Little Sister of the Sun, the witch seeks her revenge by planting herself in his palace in the form of a baby.  With Peter gone, the witch baby grows into an enormous blue giant baby, with clanging iron teeth, and destroys everything she can.  Meanwhile, Peter meets three sad giants on his way to the Little Sister of the Sun.  To cheer them up, he gives each giant one of the three magic gifts he was bringing to impress his lady love: a pebble which turns into mountains, a seed which becomes a forest, and a glass bead which creates a gush of water.  The giants are happy.  Later, when he needs saving from the blue witch baby, the giants all help him.  Golden Rule Alert!

I like the morals in these stories partly because they're not treacly.  In my book, it's more fun to discuss empathy in the context of giant blue witch babies with gnashing iron teeth than it is, say, with the Berenstain Bears.

For the next couple of weeks, as I wrestle with my end-of-semester grading, I've invited a few book-loving parent friends to step in as guest bloggers.  Stay tuned for Cyd's pick on Monday.