…Of all the pigs I have ever owned, my one particular favorite was a boar called Monty, who was a large white.  Monty never looked very white, because he lived out in the woods where there was a pond in which he liked to wallow – but he looked very large.  And he was.
I bought him as a youngster, but when he was full-grown he weighed six hundred pounds.  Monty was so gentle.  When I went out to feed him and his ten wives, he would come galloping through the trees at my call, a really monstrous and frightening sight to anyone who didn’t know what a pushover he was.

The words of Dick King-Smith, in one of his few short picture books,
All Pigs are Beautiful.  He died the day before yesterday, after a long life as a farmer, a teacher, and an excellent writer of children’s books.
The farms in his books, like the man, were British, with stone buildings and animals who were usually polite, well-spoken, often intelligent, and in his best works, crafty.  He wrote a few duds, but so many wonderful ones too.

Best known in this country is
Babe: The Gallant Pig, about a smart little piglet adopted by a sheep dog who grows up to be a sheep-pig.  His secret to herding sheep is his unfailingly polite approach.  He also learns the ovine password from the sheep at his farm, so that he can gain the trust of strange sheep at a sheep dog trial.  It was a frequent recitation in our house for a few years:

One of my favorites is
Pigs Might Fly , about a runt of the litter who thinks he’s going to grow up to fly, having overheard someone say, “pigs might fly.”  He learns to swim instead, and saves the farm that way.  The book is so wonderfully pig-centric, as in this description of the farmer:

They thought of the Pigman as a servant since he did nothing but minister to their wants; he fed them, he  watered them, he cleaned them out and brought them fresh bedding.  They spoke of him – and to him, though he could not understand this – simply as “Pigman,” as a Roman nobleman might have said “Slave.”

When Daggie, our hero meets a domesticated duck, he refers to Pigman:

Then, lest I give the impression he only wrote about pigs, there’s
Three Terrible Trins, one of the funniest books ever about revenge.  It’s the story of how five quite clever mice successfully run all the cats off a farm.  And there’s a great subplot involving the irascible farmer’s glass eye.
King-Smith had such warmth and humor.  He’s one of those authors who you feel would be a lovely person to meet.  I’ll end this with one more quote about Monty, the 600-pound pushover.  The farmer in the illustration bears a strong resemblance to the author.


What he really loved, once he'd finished his slop, was to be scratched on the top of his head, between his big ears, and it always affected him in the same way: 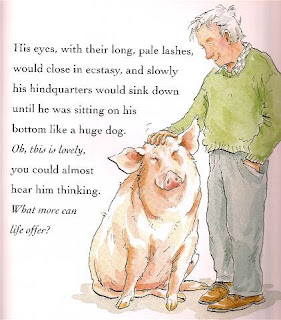 Email ThisBlogThis!Share to TwitterShare to FacebookShare to Pinterest
Labels: King-Smith