I shudder to think of all those good adventure books relegated to the "boys' library" -- and yet, as we've touched on before, there are many ways in which our own era divides books neatly into "girls' books" and "boys' books." I'm noticing and appreciating series with paired boy-girl protagonists as a way to buck this trend: Sixty-Eight Rooms, Pinky and Rex, even Magic Treehouse, though it's not my favorite thing to read. Emily of New Moon goes right on my list, and I'm sure it will be a hit with Eleanor. But doesn't that cover just scream "Girl Book"?

Isabel announced a couple of weeks ago that she was ready to try a chapter book. Practically holding my breath with excitement, I asked her what she'd like to read. "Something with magic in it. Something with good guys and bad guys, and someone with powers."

And so we return to Narnia.

I first read The Lion, the Witch, and the Wardrobe to Eleanor when she was 3 1/2, which feels crazy young when I think about it now, but she was ready for it then. We've re-read it a couple of times since then, getting a little more out of it each time. When I pulled it out to read to Isabel, Eleanor picked it up and re-read several parts on her own.

When we first read the book, Eleanor was quite frightened by Michael Hague's intense illustration of the White Witch and her attendant ghouls preparing to sacrifice Aslan on the Stone Table. She would turn the page quickly, peeking at it and then away: 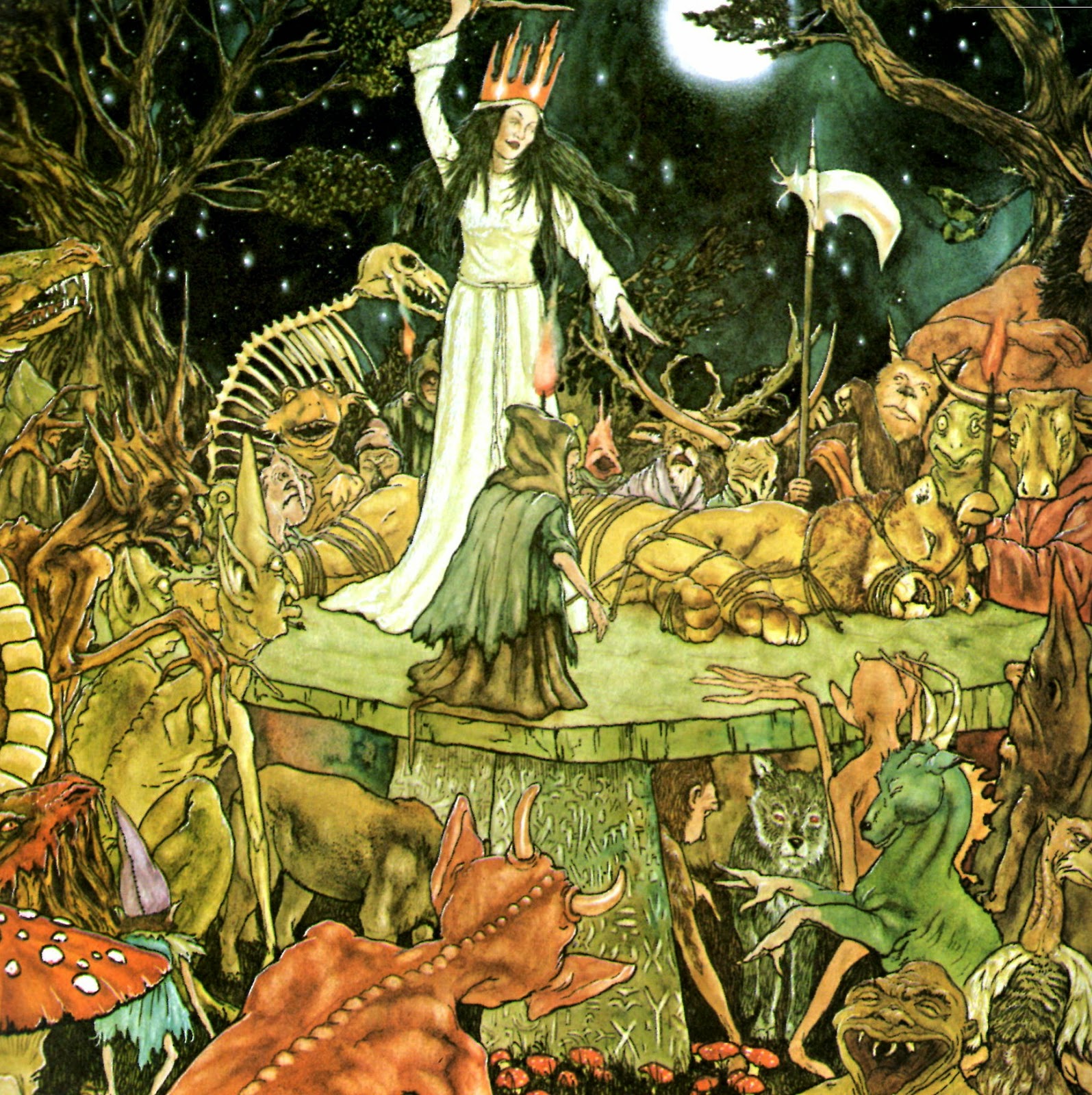 By contrast, this was the picture that convinced Isabel, fresh from the apocalyptic battles of the final Bone books, that she wanted to read the book. She pored over Hague's richly-colored illustrations, learning much of the story that way before we even started reading.

What a joy to read a chapter book to both girls at once! We sped through it, devoting morning and bedtime reading to the story. Isabel really listened, sometimes holding the book open to see one of the color plates while I read. When we finished a chapter, Eleanor often took the book to bed with her to read it again.

Hoping to keep the ball rolling, I started Prince Caspian immediately. In the second Narnia book (second that Lewis published, that is. If you go by Narnian chronology, it's number 4, but who really starts with The Magician's Nephew?), the four Pevensie children return to Narnia about a year after their first visit. In Narnian time, however, they've been gone for hundreds of years. They have passed into legend, as the Narnian Kings and Queens of old, and it turns out they've been called back magically to help Prince Caspian defeat his wicked uncle, King Miraz, and restore the Old Narnia.

Our reading is going okay -- Prince Caspian has nothing like the elemental power of The Lion, the Witch, and the Wardrobe, but the time-travel aspect is engaging, and there are several excellent characters. The version we're reading from is a giant paperback containing all seven Narnia books, with each chapter headed by one of Pauline Baynes's black and white line drawings. What I wouldn't give for more Michael Hague color plates! Without them, Isabel's attention wanders. Yesterday, she didn't want me to read it at bedtime, and we started off with a picture book. When Eleanor chose more Prince Caspian, Isabel did get into it in spite of herself. How could she not, in a chapter involving a fight with a hag and a werewolf?

Are there any really good illustrated versions of the other Narnia books? I did a quick search and didn't come up with any. But really, even a large drawing of the fighting mouse Reepicheep or the centaur Glenstorm would go a long way.

In the meantime, we'll be returning to picture books and graphic novels more often, charting Isabel's course in a different way than Eleanor's. As it should be.