Who's going on a bear hunt?

Such a lovely list from your pal and guest blogger Faith.  I've got to find My Henderson Robot -- sounds delightful.

Tonight at dinner, which often includes Lizzie these days (one last exam next week and she's a college graduate!), she pulled a book from the dining room shelves and asked if I'd ever blogged about it.  Your pal Denise, guest blogger extraordinaire, mentioned it in a list of summertime books, but I'm going to return to it.

We're Going on a Bear Hunt
(words by Michael Rosen; pictures by Helen Oxenbury) just begs to be read aloud with great gusto.  I suspect you and Jeff have added a number of embellishments to it.  Michael Rosen provided the words, based on what he says was an old campfire song.  Five family members and a dog set out on an expedition, encountering a series of obstacles along the way.


We're going on a bear hunt.
We're going to catch a big one.
What a beautiful day!
We're not scared.
Oh-oh! Grass!
Long, wavy grass.
We can't go over it.
We can't go under it.
Oh, no!
We've got to go through it!

It's all wonderfully rhythmic and repetitive.  "I had this idea," Oxenbury has said, "of doing a black and white page when they're thinking and when they're saying, you know, about where they're going and what they're going to do. And then when they've decided, it burst into color."

The arrival at a cave (Tiptoe!) leads to a startled confrontation with an actual bear, followed by a hasty retracing of steps: 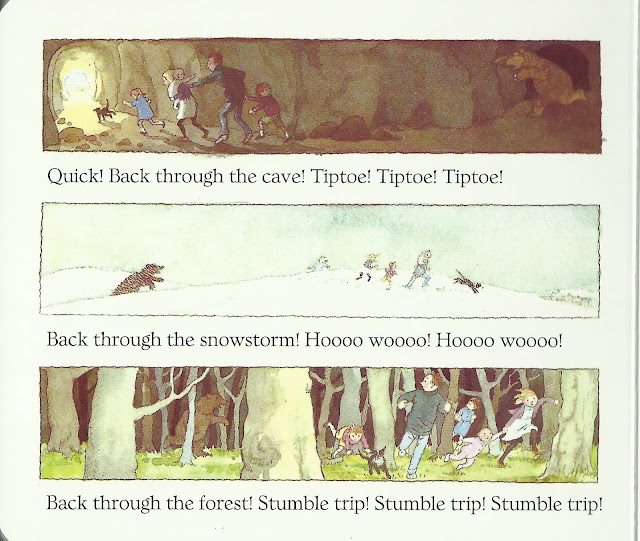 The book ends with the family safe at home, in bed under the covers, and the bear wandering sadly on a beach.  I've been reading this book for a bit more than 20 years, and until tonight I'd always assumed the big guy is the dad.  I've been a little confused about the blonde in the white dress: probably the big sister, but could be the mom.  Here's Oxenbury on how she interpreted the words:


What's wonderful about it is that nothing is described in a way that restricts you. Michael had said he envisioned it as a king and queen and jester setting off to hunt a bear, but I immediately saw it as a group of children. Everyone thinks the eldest one is the father; in fact he's the older brother. I modeled them on my own children. I didn't want adults around because they tend to stilt the imagination. The dog in the pictures was my own dog.

There's so much special in this book that it's hard to imagine it any other way.  King, queen and jester?  Can't see it.  But to change the dad to the big brother -- I'm still wrapping my mind around that one.

I remember Lizzie's first pre-school, where the kids acted out each color page of the quest.  Lizzie, it turns out, doesn't remember much from that experience, but had it read to her throughout childhood, and read it to kids she babysat.

Now, she says, it's part of her -- one of those literary references -- that comes up with friends when, say, they're going to the dining hall:

Deborah
Posted by Deborah at 11:59 PM