What a spectacular book Little Nemo in Slumberland is.  And those pictures of Jeff and Isabel reading!  We need to incorporate them into our permanent collection here on the blog.  The sheer size of the book makes me think of lying on the floor reading the Sunday funnies.

Way back in November, you wrote about George MacDonald's The Princess and the Goblin.  I'm curious to know what happens if you give it another try with Eleanor.  I don't know the book, but have been a fan of MacDonald's
The Light Princess since my own childhood.  Was it part of your growing up?  It's such a delightful combination of fairy tale and wordplay.  And in 1969 (a year before publication of In the Night Kitchen) Maurice Sendak did a wonderful series of illustrations for it -- including one with a naked baby which apparently triggered none of the controversy that came a year later.

After longing for a child, a king and queen finally have a baby.  They forget to invite the king's sister, Princess Makemnoit, to the christening.  So of course she shows up, muttering a charm at the font:


"Light of spirit, by my charms,
Light of body, every part,
Never weary human arms --
Only crush thy parents' heart!"
They all thought she had lost her wits, and was repeating some foolish nursery rhyme; but a shudder went through the whole of them notwithstanding.  The baby, on the contrary, began to laugh and crow; while the nurse gave a start and a smothered cry, for she thought she was struck with paralysis: she could not feel the baby in her arms.  But she clasped it tight and said nothing.
The mischief was done.

The princess has no gravity, in both senses of the word.  When the baby is tossed into the air, she floats upward until air resistance slows her.  One summer day a breeze blows her out a window: 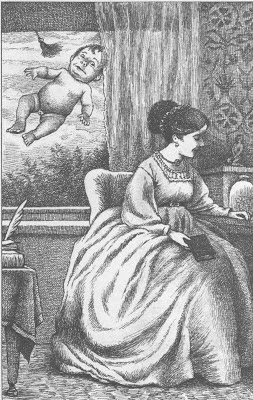 She's found in a rose bush. laughing cheerily.  She laughs at everything: floating above the servants' reach she's "like a baby-laughter-cloud in the air, exploding continuously."  She takes nothing seriously, making light of everything -- which makes her parents predictably sad.  To propel herself across the ground, she must hold onto rocks in each hand.


I may here remark that it was very amusing to see her run, if her mode of progression could properly be called running.  For first she would make a bound; then, having alighted, she would run a few steps, and make another bound.  Sometimes she would fancy she had reached the ground before she actually had, and her feet would go backwards and forwards, running upon nothing at all, like those of a chicken on its back.  Then she would laugh like the very spirit of fun; only in her laugh there was something missing.  What it was, I find myself unable to describe.  I think it was a certain tone, depending upon the possibility of sorrow -- morbidezza, perhaps.  She never smiled.

Eventually it is discovered that swimming gives her some gravity: she loves it and becomes a tad more serious when water is keeping her from floating away.  "Perhaps that was because a great pleasure spoils laughing."

During one nighttime solitary swim, a prince wanders into the story and falls into the lake, where he falls in love with the lovely princess.  The evil witch gets wind of this and makes bad things happen to the swimming lake, and then the prince offers himself as a sacrifice to restore it.  His near-death -- and a good long cry on her part -- restore her gravity, and introduce her to love.  The wedding, which leads to happily ever after, has to be postponed, however, until she learns to walk, "for she could walk no more than a baby."

A satisfying and funny tale.

Deborah
Posted by Deborah at 9:07 PM

Email ThisBlogThis!Share to TwitterShare to FacebookShare to Pinterest
Labels: Macdonald