I'm nearing the end of my grading marathon (and the beginning of my maternity leave -- Monday is my last day at work, and Barleybee should be making his entrance sometime in the next few weeks).  Here, to round things out, is my friend Clara, kindergarten teacher and mom of Isabel's good friend Vera, who wrote beautifully for us some months ago about teaching kindergartners to read.

I have a new favorite picture book for our home library: Extra Yarn, by Mac Barnett, illustrated by Jon Klassen.

It came to us at Christmas, a nearly forgotten gift left under the tree in a shadow and rediscovered when we returned from traveling for the holidays. I promptly bought one for my classroom and a few for any upcoming occasions requiring gifts for children or teachers. Everyone I mentioned the book to hadn't yet heard of it, but I'm hoping to see it in bookstore windows all over the city soon.

The illustrator is known for I Want My Hat Back, which is also part of our home library, and Extra Yarn certainly wouldn't be the same without his sparse, powerful paintings. The author's name didn't ring a bell at first, but when I looked him up I found that I have bought his books for my nieces and my classroom (Billy Twitters and His Blue Whale Problem, The Clock Without a Face, and Oh No!: Or How My Science Project Destroyed the World). Phrases used by reviewers to describe Barnett's other books include surreal, clever, slyly subversive, definitely funny, and wonderfully ridiculous. Extra Yarn, however, is subtle and touching. Funny and subversive, yes, those too, but it has its own simple tone. 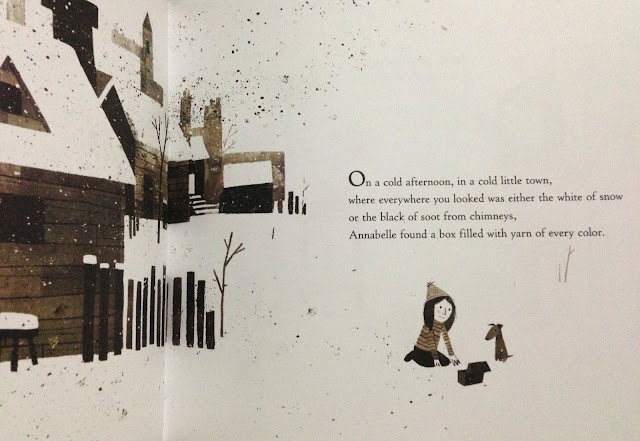 Annabelle proceeds to knit herself a sweater, and one for her dog, but she still has extra yarn. A neighborhood boy makes fun of her sweater. Her eyebrows furrow but she reasons that he must be jealous and so she makes a sweater for him, and one for his dog while she's at it. But she still has extra yarn. In school, the other children are distracted from their work because they can't help but turn around to look at Annabel's colorful sweater set against their world of grays. Her teacher bans the sweater from the school, but again Annabelle figures that if she simply knits sweaters for her whole class, they won't have to turn around anymore. Her teacher doesn't believe she is up to the task.

"Impossible," said Mr. Norman. "You can't!"
But it turned out she could. And she did. 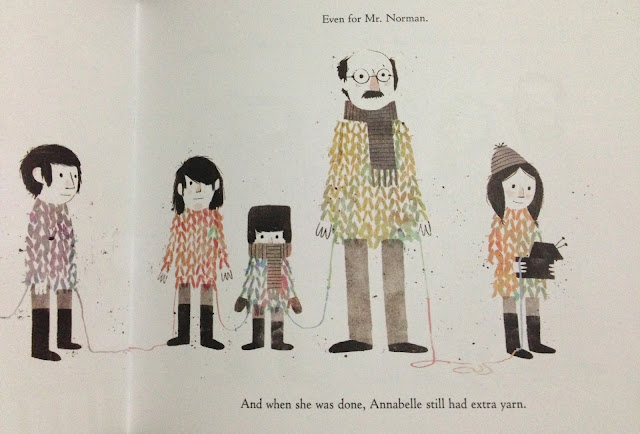 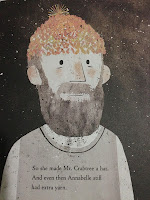 After knitting for the entire town (even the neighborhood nudist, for whom she knits a hat), Annabelle knits for the animals (you will recognize forest friends from I Want My Hat Back) and every inanimate object that will hold a row of knits and purls. She is then visited by a duke from across the sea who is quite fond of fashion. He offers her a million dollars for her box, but she says no. He steals it by night, sailing with the box to his land across the ocean, which is aptly painted in only blacks and grays. When he opens the box and finds it empty, he hurls it back into the ocean, cursing Annabelle to never be happy again. With no words for the next two page spread, the box floats back to shore into Annabelle's hands. The curse to "never be happy again" still hangs in the air. The book simply ends with "But it turns out, she was." 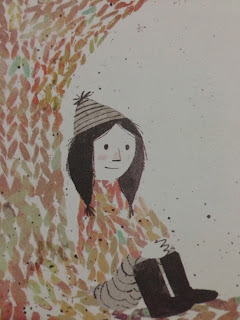 My husband and I argue over who gets to read Extra Yarn during bedtime stories. He loves that the illustrator puts this book in its own world, one with incongruous time signatures; prominently featured are soot, a count in an elaborate sea vessel, and a pickup truck. I love that there is a magic box that is never called magic, and a girl that is generous without ever being called so. I adore that this child does not act selfish for 95% of the book (a huge pet peeve of mine and far too common), serving as a bad role model to her readers, and then miraculously learns her lesson to become generous. She just is. She's not even celebrated for it, except perhaps by her readers.

Mac Barnett's language matches this feeling of just being, just doing. Annabelle just has extra yarn. She just knits beautiful sweaters for others. She just is happy. And Jon Klassen's illustrations couldn't fit the story better either. Annabelle's simply painted gray scale town is transformed by her simple, repeated acts of generosity and her extraordinary box of yarn.

The book does not hit readers over the head with morals, magic, or the domino effect one person's kindness can have on others. It remains a simple, sweet story that leaves you feeling, well, just good.

p.s. If you don't have it by then, when Barleybee arrives, he just may find himself with a copy of this book and if I can find the right box of yarn, something to keep his head warm.